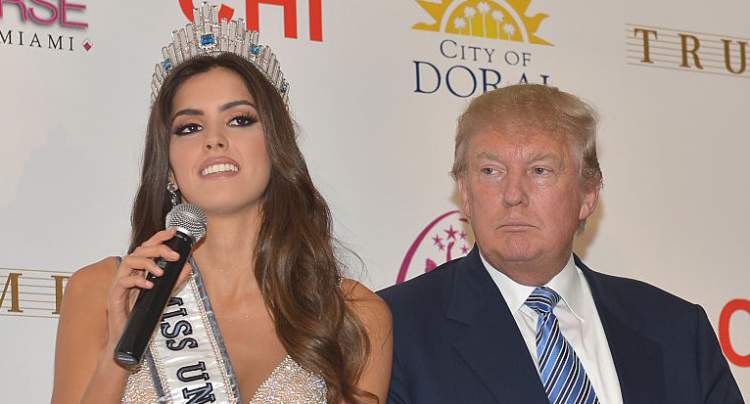 In 1996, Trump bought the Miss Universe pageant and during his reign, repeatedly went into the women’s dressing rooms.

“He just came strolling right in,” said 2001’s Miss Arizona’s Tasha Dixon. “There was no second to put a robe on or any sort of clothing or anything. Some girls were topless. Others girls were naked. Our first introduction to him was when we were at the dress rehearsal and half-naked changing into our bikinis.”

The former Miss Arizona also said that the pageant organization encouraged the contestants to give Trump attention whenever he arrived.

“To have the owner come waltzing in, when we’re naked, or half-naked, in a very physically vulnerable position and then to have the pressure of the people that worked for him telling us to go fawn all over him, go walk up to him, talk to him, get his attention…”

When it comes to owning the Miss Universe pageant, that claim is false! Trump lost broadcast sponsors such as NBC and ABC after he accused Mexicans of being rapists and criminals during his presidential campaign against Hillary Clinton. As a result, he was forced to sell his ownership over to WME in 2015, ending nearly two decades of ownership. That also included the other pageants such as Miss USA and Miss Teen USA. Trump put himself in more hot water when he was caught on tape talking about women inappropriately, which also caused Access Hollywood‘s Billy Bush to be fired shortly after.

In a 2005 interview, Trump bragged to radio  host Howard Stern about his unlimited access to all the contestants.

“It could be a conflict of interest. … But, you know, it’s the kind of thing you worry about later, you tend to think about the conflict a little bit later on,” Trump said jokingly.

In 2009, Miss California’s Carrie Prejean, wrote in her memoir that Trump would cause riffs between the contestants and asked them to judge each other’s appearances.

“Donald Trump walked out with his entourage and inspected us closer than any general ever inspected a platoon, Prejean wrote. “He would stop in front of a girl, look her up and down, and say, “Hmmm.” Then he would go on and do the same thing to the next girl. He took notes on a little pad as he went along. After he did this, Trump said: “O.K. I want all the girls to come forward.”

She added, “It became clear that the point of the whole exercise was for him to divide the room between girls he personally found attractive and those he did not. Many of the girls found the exercise humiliating. Some of the girls were sobbing backstage after he left, devastated to have failed even before the competition really began to impress ‘The Donald.'”

According to Rolling Stone, in 2015, the Trump campaign released a statement saying, “Mr. Trump has a fantastic record of empowering women throughout his career, and a more accurate story would be to show how he’s been a positive influence in the lives of so many.”