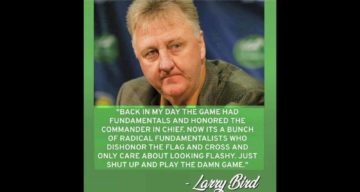 Larry Bird made a comment disparaging the athletes taking a political stand.

NBA legend Larry Bird is not only famous for his game, but also for his unbeatable trash talk. The iconic player doesn’t hold back his words. So when an alleged quote by Bird which disparages the athletes taking political stands circulated social media, fans wanted confirmation if it is true. To many, it doesn’t sound much like the signature trash talk by “The Hick from French Lick.” Fortunately, the Indiana Pacers set the record straight about their former head coach’s alleged statement.

The quote, “Back in my day, the game had fundamentals and honored the commander in chief. Now it’s a bunch of radical fundamentalists who dishonor the flag and cross. They only care about looking flashy! Shut up and play the damn game,” was attributed to Boston Celtics icon and former Indiana Pacers head coach, Larry Bird.

While Larry Bird has some infamous trash-talk incidents to his name, his sudden political comment confused Celtics fans. A search for the quote also didn’t turn up results, further adding to the confusion.

With the raging debate that has gripped the country in recent months, NBA and other athletes are doing their part to advocate for racial justice. But the alleged quote by Bird is being wrongly used to disparage the athletes who are taking a political stand.

Carlos Diaz, a journalist with the Indiana-based NBC affiliate, WTHR, contacted the Indiana Pacers organization regarding the quote. Bird currently serves as an advisor with the team. In a tweet, Diaz revealed the Pacers response was that the quote was “Totally false.”

There’s a false meme circulating on social media which features a supposed quote from Larry Bird concerning today’s NBA players.
I contacted the Indiana Pacers on behalf of WTHR asking if this statement is actually from Larry Bird. The Pacers’ response:
“Totally false.”@WTHRcom pic.twitter.com/kSscSpc9YR

Larry Bird made no such comment, which had reportedly been concerning the basketball players. The origins of this bogus quote is not known, but it certainly didn’t come from Bird.