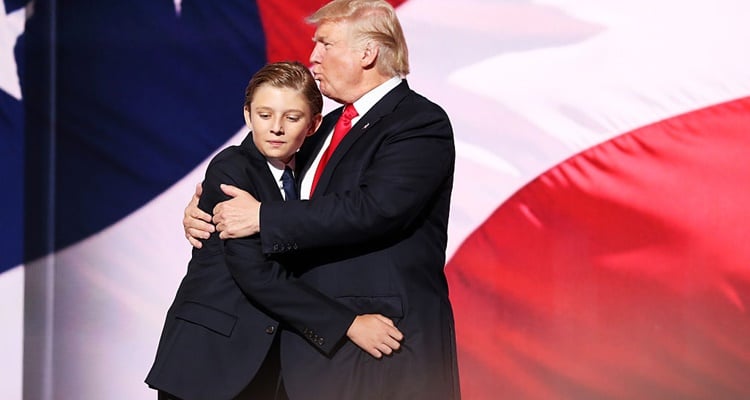 Barron Trump ran away from his home

While most people are following headlines about Barron Trump’s birthright citizenship, a source is boldly declaring that the First Son of the United States of America has run away from his home. EarnTheNecklace is here to separate fact from fiction!

Firstly, let’s talk about the source this particular news comes from. Patheos.com published the aforementioned headline. The site is notorious for spreading “satirical” news, in a section dedicated to satire.

People who like to read the news and stay updated on the Internet have been scratching their heads as to where Barron Trump, 12, is and why he would run away from his gilded home. The news itself is 100% fiction, and is so claimed by the website that published it!

The site states that Trump ran away from his home in the early hours of November 4, 2018, and that law enforcement is currently looking for him.

They also claim that he decided to flee because he’s “99% sure” that his father, President Donald Trump, is the “Antichrist,” and that the younger Trump does not want to be a part of it.

Did Barron Trump Run Away?

The previous statement has been hyperlinked, and when you click on the link, it says: “Have you clicked a link to a story and you’re here? The story you are reading is satirical. The post may have links to real events that the satire is based on, but the Laughing in Disbelief article is fake.”

To further refute the claim, the term “law enforcement” has been used pretty loosely here—it could mean any department.

The site also mentions that the “search” for Barron Trump has taken them to local churches, as he might be hiding there.

It’s pretty clear that the United States Secret Service is the first line of defense for a sitting president and their immediate family, a piece of information the fake news site has conveniently chosen to avoid.

Moreover, neither the FBI nor any other government protection agency has come forward with any such announcements/updates.

And as far as social media is concerned, none of Donald Trump’s infamous Twitter statements have come up, nor has the official FLOTUS account on Instagram said anything about Barron going missing.

The article seems to want to defame Trump, with quotes from a Reverend George Carlin stating that the President is  “emotionally unstable and an unfit father.”

None of the statements hold any weight, and it seems like the article was written mainly for entertainment purposes.