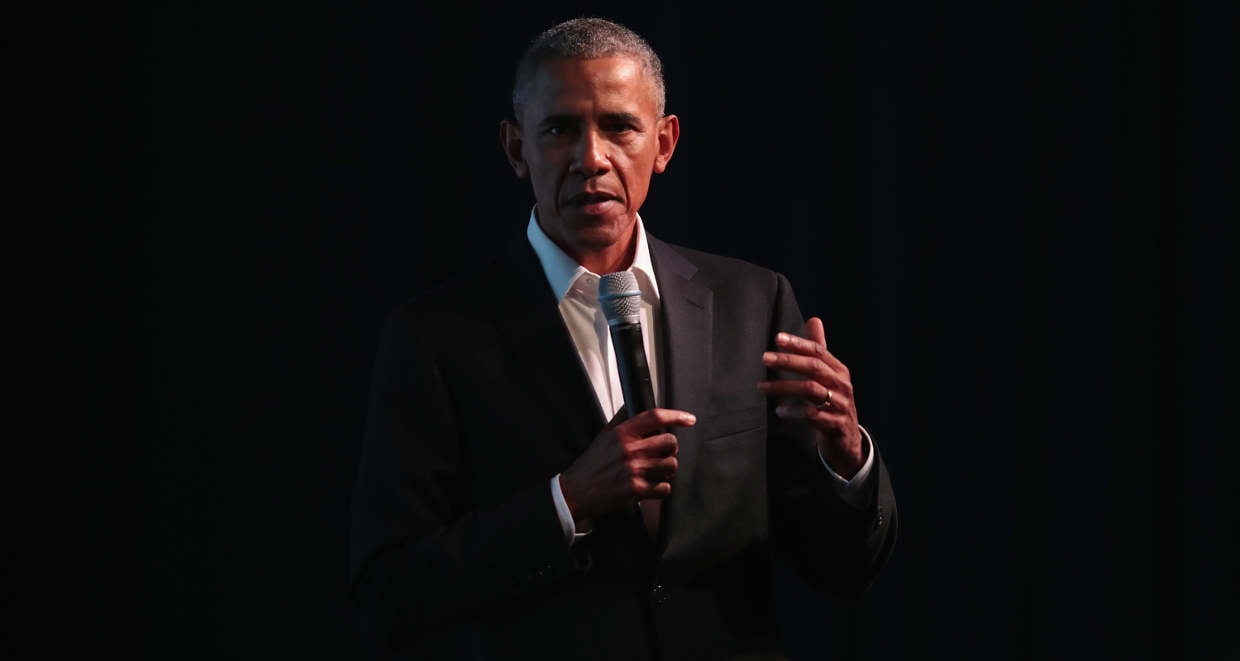 Former president Barack Obama speaks at the inaugural Obama Foundation Summit on October 31, 2017 in Chicago, Illinois. The two-day event is scheduled to feature a mix of community leaders, politicians and artists exploring creative solutions to common problems, and experiencing art, technology, and music from around the world. Credits: Scott Olson/GettyImages

Former President Barack Obama is surrounded by several rumors, including the longstanding speculation about his time at Columbia University. Many claim that Obama wasn’t a student at Columbia, and they cite Professor Henry Graff as a source. The long-time Columbia academician claims he never taught Obama.

Barack Obama is no stranger when it comes to rumors. One of the famous rumors, second to the birth certificate conspiracy, is his ghostly presence at Columbia University.

For a long time, Obama’s critics believe that he lied about his Ivy League education and demanded proof that he attended Columbia. They cite Columbia professor Henry Graff, who said he doesn’t remember Obama as a student.

Here’s what you need to know about Graff’s statement.

If you followed Barack Obama’s life, you’d know that he transferred from Occidental College in Los Angeles to Columbia University, in New York City, where he majored in political science with a specialty in International Relations.

Obama doesn’t reveal much about his student life nor has he made his transcripts or schools records public. His hesitance to disclose information about his university days has become a cause for speculation.

Earlier this week, James Woods tweeted a request for evidence that Obama attended Columbia University. The veteran actor is known to use Twitter to criticize the former president.

Hey, if any of you went to Columbia University and recall Barack Obama as a student there, would you please respond with a tweet and a pic of him at Columbia? Thanks.

Woods tweet rehashed an old rumor that started with Wayne Allyn Root during Obama’s 2008 and 2012 presidential run. The political commentator graduated from Columbia in the class of ‘83, the same year Obama allegedly graduated.

However, Root claims he never saw Obama in class or on campus. In an article for The Blaze, he called Obama “the Ghost of Columbia University.” By his account, no one remembers the two years Obama was there.

With all the speculation surrounding Obama’s attendance at Columbia, Root looked for someone who could confirm it. That’s why he contacted Professor Henry Graff.

Graff, a Columbia alum himself, is a scholar in history who taught at the Ivy League school for over four decades. As of 2018, he’s retired and is now a professor emeritus at Columbia.

Root was ecstatic that Graff remembered him as a student and followed his career. And he was convinced that the former academician had a sharp memory of all his prominent students. So, when Root asked about Barack Obama, Graff had a different response.

“I taught at Columbia for 46 years,” Graff told Root. “I taught every significant American politician that ever studied at Columbia. I know them all. I’m proud of them all. Between American History and Diplomatic History, one way or another, they all had to come through my classes. Not Obama. I never had a student with that name in any of my classes. I never met him, never saw him, never heard of him.”

Graff further added that none of his colleagues remembered Obama either. He said he was upset that Obama was called “the first President of the United States from Columbia University.”

The former university professor further cast doubt on Obama’s presence at Columbia in an interview with WND and said, “Nobody I knew at Columbia ever remembers Obama being there.”

Graff’s quote on Obama has been repeatedly shared on social media. One such post has been shared over 28,000 times on Facebook.

The Truth behind the Mystery

Despite the speculation that Obama never attended Columbia, there is plenty of evidence to support the contrary. Columbia University claimed that Obama was an alumnus when he was elected president.

The University’s publications have done more profiles on him with details from his time there. Classmates and roommates who were with him at Columbia, including Michael Baron who taught him, have come forward to describe the former POTUS’ student life.

There was a fake report that Obama attended Columbia as a foreign student named “Barry Soetoro.” Even a purported student ID with that name was making the rounds, claiming that Obama was not a U.S. citizen, which meant he could not hold the office of the president.

The ID was, however, proven to be a forgery and the rumor was debunked.

As for the sealed records, Obama doesn’t pay a hidden third party to keep them under wraps. The documents aren’t “sealed” by definition.

Courts can seal criminal or adoption records, but not education documents. Certain information is simply not made public when you’re running for presidency.

Like the time George W. Bush’s mediocre grades were leaked by someone even though he refused to make his school records public. So, Obama isn’t withholding anything other presidents haven’t.

There are a lot more federal, state, and legal records that prove Obama did attend Columbia and not as a foreign student.

Nevertheless, one can’t refute what Henry Graff said either. He has a vivid memory of his most prominent students. So, if he never heard of Obama on campus, it’s probably true.

It supports an old report by Fox News that said it contacted 400 Columbia alumni from when Obama was a student. But none of them claimed to remember him at all.

However, if Graff or Columbia alum don’t recall Obama as a student, it doesn’t mean the 44th President never attended the college. It only conveys that Obama was not very social as a student and didn’t stand out from the crowd.

As Obama himself described his time in New York, “I spent a lot of time in the library. I didn’t socialize that much. I was like a monk.”

Rumors about Obama, whether it’s regarding his education or citizenship, have been disproved several times. Nevertheless, many don’t accept it.