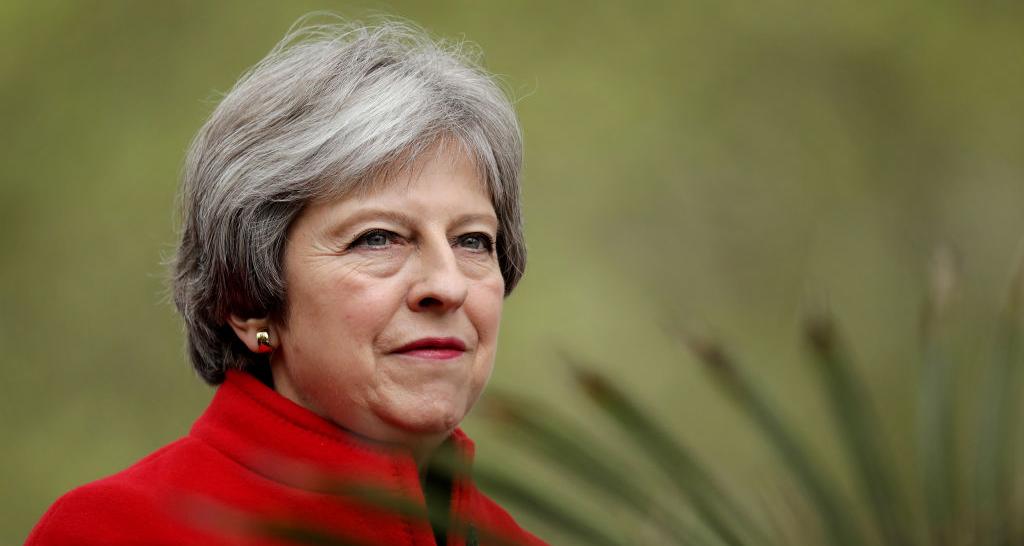 Theresa May attends the official unveiling of a statue in Parliament Square Credits: Dan Kitwood/Getty Images

UK Prime Minister, Theresa May informs citizens that the state owns their children.

Did Theresa May confirm a parent’s worst nightmare? The Babylon Bee published a report on their website about a purported video of the British premier declaring that the state owns their children. The alleged video is a “friendly reminder” to parents that their children are on loan to them. Oh, the horror! But this is not true, and EarnTheNecklace.com is here to explain why.

Who Owns Your Children?

The Babylon Bee terrified social media with an article titled “Prime Minister Issues Friendly Reminder To UK Parents That The State Owns Their Children.” The report is based on an alleged video of Theresa May giving a reminder (read: warning) to British parents that their children belong to the state.

The news of the supposed video and report come as the case of Alfie Evans grips the UK. The two-year-old was born with a rare degenerative neurological condition that remains undiagnosed. 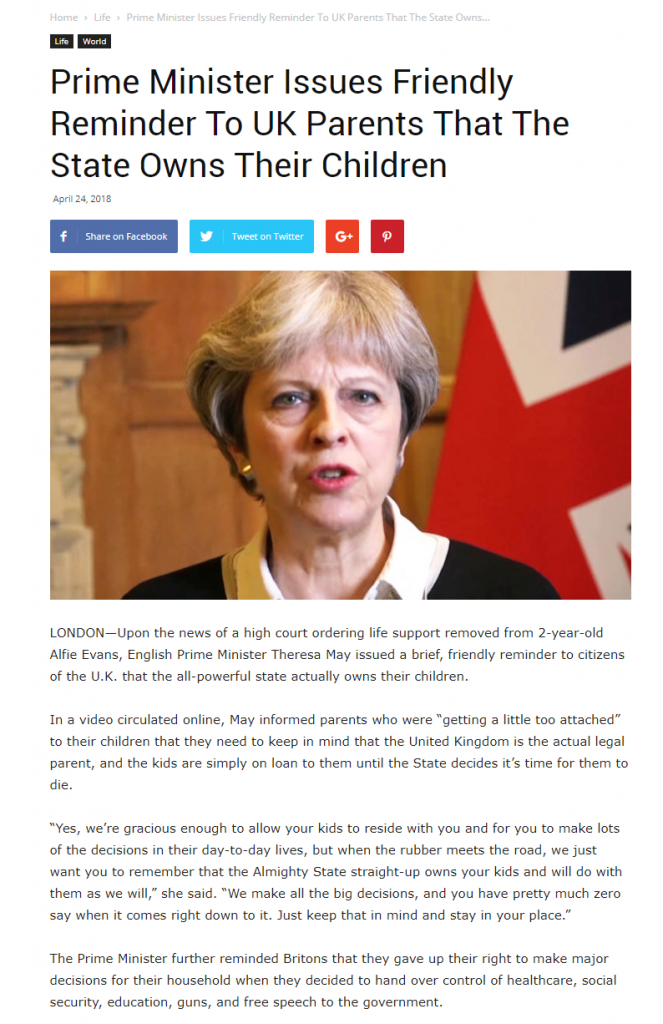 Alfie Evans was hospitalized in December 2016 after suffering seizures and has been on life support since. Remarkably, the toddler has been fighting his condition against all odds in a “semi-vegetative state.”

Doctors have suggested that taking Alfie off life support is in his and his parents’ best interests. His parents, however, have been locked in a legal battle to keep their son on life support.

The parents have earned unparalleled support globally, including from Pope Francis. Many have also donated to pay for Alfie’s mounting medical bills.

But medical experts say that the child needs to be with his family instead of a breathing machine. UK’s justice system and even the European Court of Human Rights agreed that further treatment would be futile.

Consequently, Alfie’s life support was turned off on April 23. The child has since been fighting to breathe unassisted. In a last-ditch effort, his parents have appealed to overturn the court ruling that’s preventing them from taking their son to Italy for further treatment.

As Alfie’s family continue to challenge the court’s decision, Theresa May apparently decided to tell parents who owns their children.

May allegedly tells parents not to get too attached to their children because the United Kingdom is their children’s legal parent. The children are on loan to them, and the state is gracious in letting parents make important life decisions.

But ultimately, “the State decides it’s time for them to die,” said the report.

Alfie Evans’ parents will today challenge a High Court ruling preventing them from taking him to Italy for treatment. The 23-month-old is currently being treated at Alder Hey Hospital in Liverpool as @julietdunlop reports. pic.twitter.com/9hxzi3JKOP

Google Trends recorded a rise in searches related to Theresa May and Alfie Evans on April 25, soon after Babylon Bee published the article.

Searches related to the particular report was a “Breakout” search. This means that there was a 5000% rise in search volume as soon as it was published. 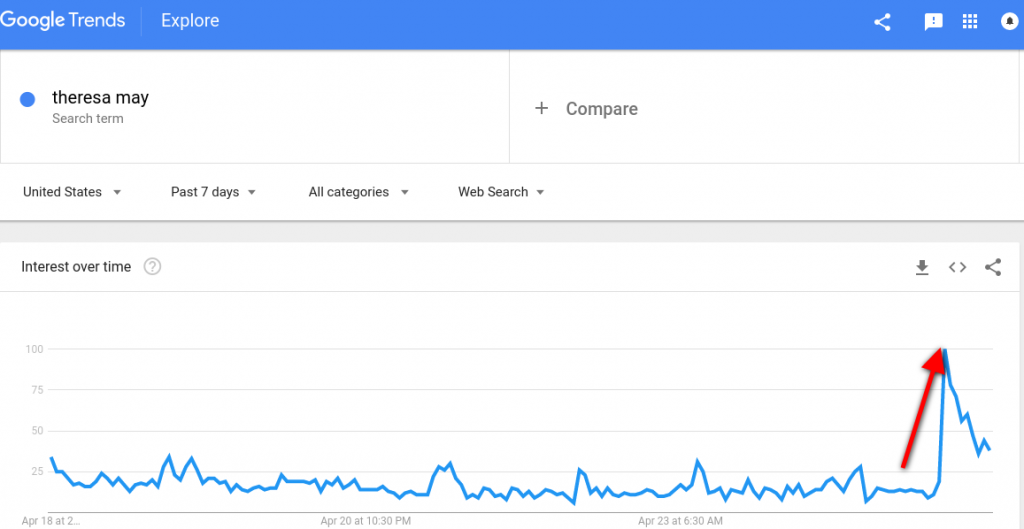 Social media was also quick to react to this report. Many were appalled and upset by May’s supposed declaration. However, it’s interesting to note that most didn’t believe it to be true.

May’s blunt speech as reported by the website is as horrifying as it is false. And there’s a rather simple explanation for it.

One possibly can’t “own” children. After all, they’re people, not possessions. But we’ll debate on the moral definition on another occasion.

We’ll also not delve into the nitty-gritty of the state controlling certain aspects of its citizen’s household.

It’s safe to say that Theresa May issued no such video and the report is false. The Prime Minister has never even remotely claimed that the government owns the children! 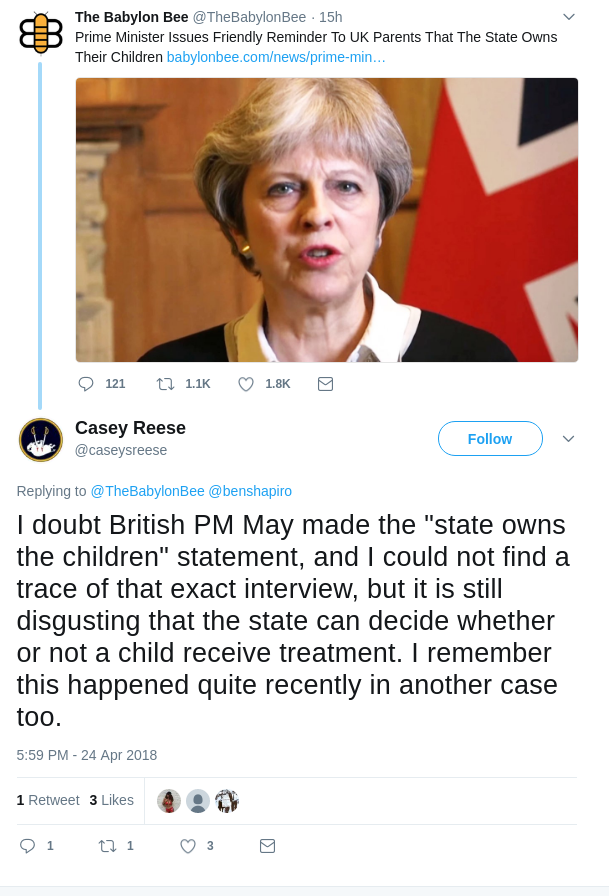 The Babylon Bee calls itself “Your Trusted Source For Christian News Satire.” Any news published on this website is made up for entertainment purposes. It could be that the site is giving its satirical take on the Alfie Evans case.

The site even did a fake review of Avengers: Infinity War. Not to spoil the movie, but apparently, the heroes dance to Mulan’s “I’ll make a man out of you” at the end.

Although it’s obviously a fake news story, some social media users have pointed out the chilling reality mimicking satire. 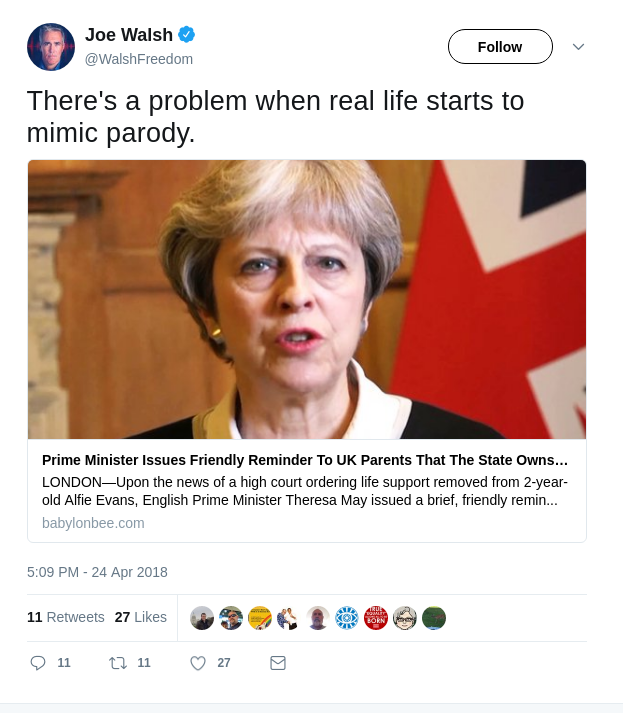 The story is only one of many opinions in the Alfie Evans case. Many have called out the government for deciding on a child’s life, instead of the parents getting to make that decision.

Social media users, irrespective of whether they are British or not, are appealing the UK courts and lawmakers to let Alfie’s parents decide how to help their son.

The report may not be true, but the people are calling out the Theresa May administration to prove that the state doesn’t own the children by overturning the Alfie Evans decision. 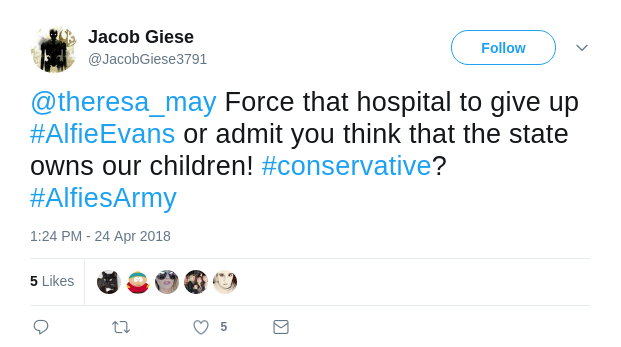