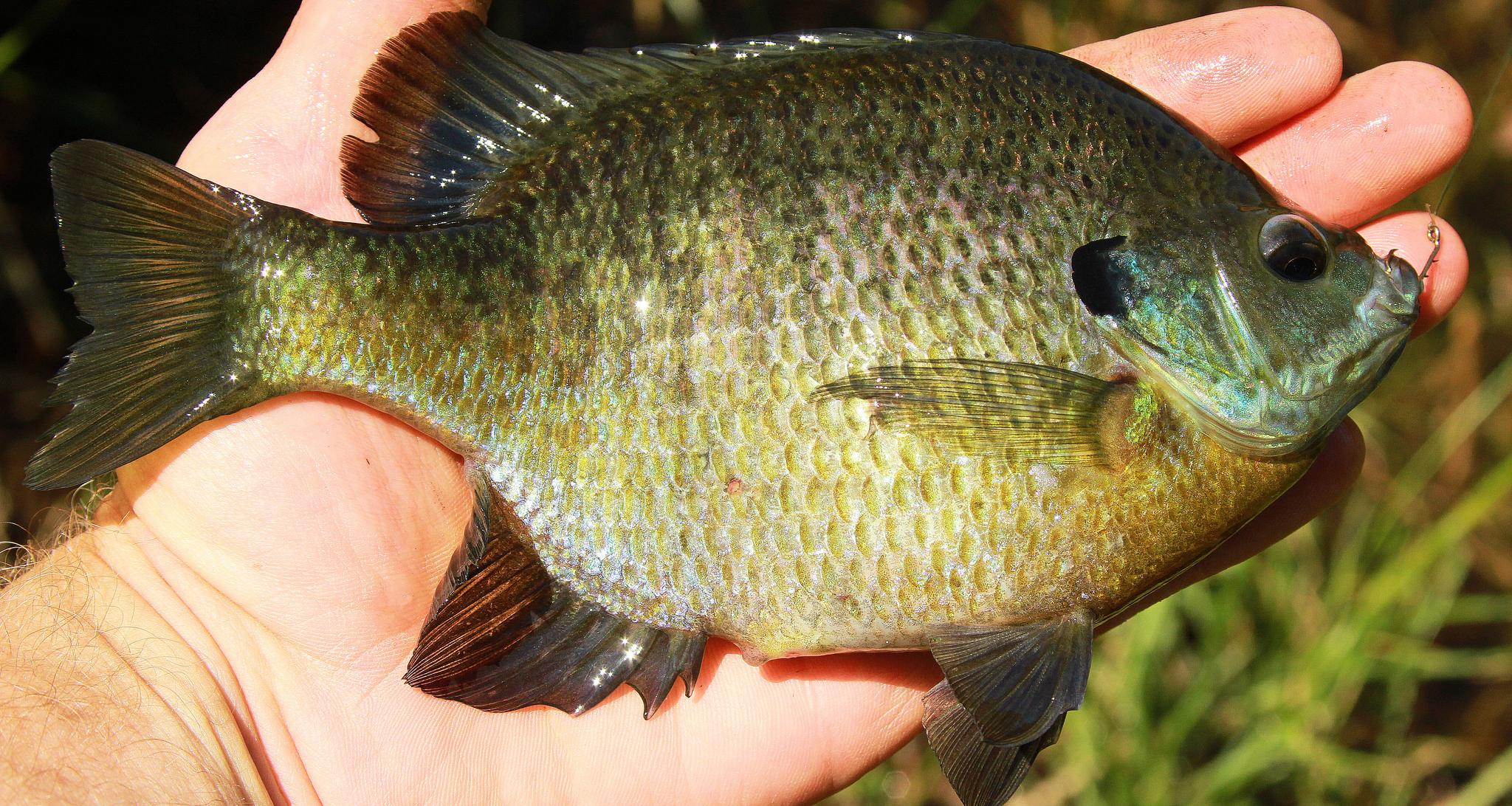 The Bluegill fish species is related to the Piranhas and are extremely dangerous to humans.

A bizarre post has been leaving Facebook users and fishing enthusiasts wide-eyed. It claims that bluegill fish are the most dangerous fish in North America. This species is allegedly a cousin of the piranha, which makes them equally dangerous. This post is confusing to many people who have encountered bluegill fish with next to no consequences. Something smells fishy here. There’s no need to add the innocent bluegill to your list of finned foes just yet!

Are Bluegills Related to Piranhas ?

On June 21, Southern Catfishing’s Facebook account posted what appears to be a news excerpt that has surprised fishing enthusiasts.

The post alleges that bluegill fish, a common freshwater species in North America and often caught in game fishing, are related to piranhas.

Piranhas are scary enough already. So, how dangerous is a supposed cousin of this deadly species? 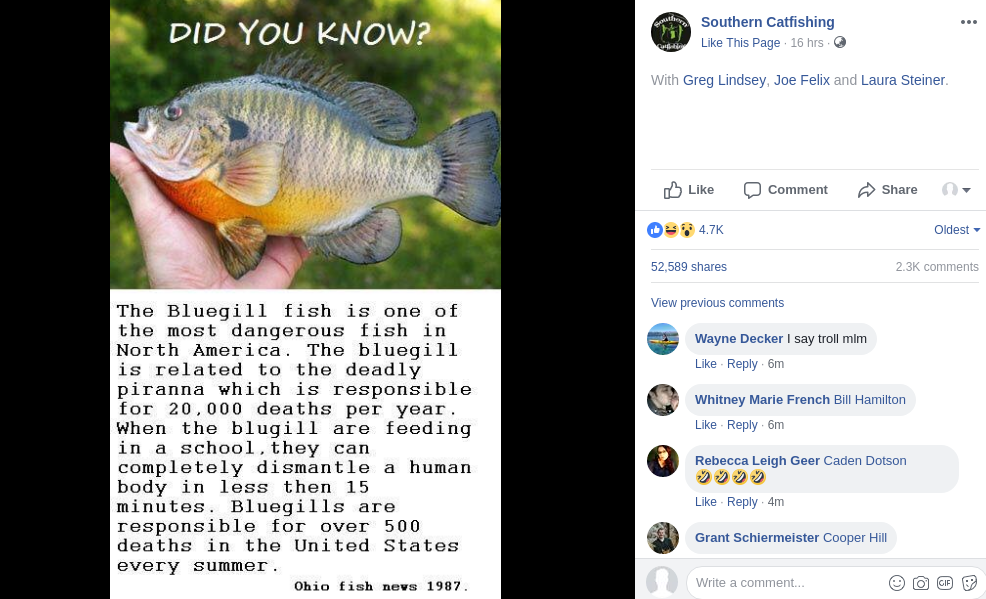 The Facebook post states that bluegill fish are responsible for a whopping 20,000 deaths per year! A school of bluegills can allegedly dismantle a human body in less than 15 minutes. This species is allegedly responsible for more than 500 deaths in the U.S. every summer.

These claims are, of course, puzzling to many. After all, many have come across bluegill fish in everyday life and these people have come out of a bluegill encounter unscathed.

Google Trends recorded a massive spike in searches related to bluegill fish on June 21. Terms like “bluegill death,” “bluegill piranha,” and “bluegill kill people” were breakout searches that day. The search volume is particularly high in the eastern U.S., where bluegill fish are native.

Before you question everything you know about bluegill fish, you should know that this post is completely false. The species is harmless and far from dangerous to humans!

Bluegill fish aren’t even related to piranhas, which is a huge relief. However, many people mistake bluegills for piranhas as they are similar in appearance.

The post by Southern Catfishing is taken from Ohio Fish News and goes back to 1987. It contains spelling errors like “piranna” and “blugill.”

A quick search online reveals that the publication doesn’t even exist. The original 1987 article is nowhere to be found, either.

This made-up news clipping appears to be intended for humor.

Southern Catfishing is a “family-friendly fishing” page. Its posts are generally memes related to the fishing hobby. It’s possible that Southern Catfishing shared the news clipping for fun and it should be taken with a grain of salt. Nonetheless, people believe what they hear!

People have taken to social media to say that the claim is false. One user said that the teeth of bluegill fish are like sandpaper and a school of them can’t even break human skin. The most they would do is tickle you to death.

Many have shared their accounts of catching, prepping, and eating bluegill fish without any adverse effects. 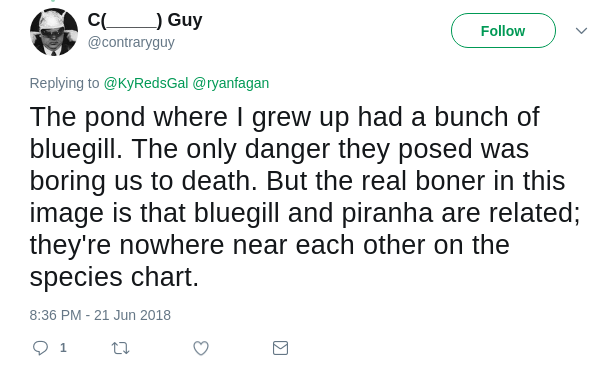 Some have hit up Ryan Fagan on Twitter. The sports reporter is a major outdoors expert.

He shut down this defamatory claim against bluegill fish. He said that apart from a prick from their pointy dorsal fin, these fish are harmless.

Okay, @ryanfagan or any other fisherperson…have you ever heard this? Is this total bunk or is this just something I’ve never heard my entire country life? I’m struggling here… pic.twitter.com/WCAVg9awju

Unlike many other fish species with toxins in their spikes, the bluegill’s spiky dorsal fins are not poisonous.

The only deaths bluegill fish are responsible for are of small fish and aquatic insects. It’s well known that this species thrives in shallow waters and keeps a check on the crustacean and insect populations in ponds and lakes.

Piranhas and bluegills and aren’t even distantly related! It’s possible that many are confusing bluegill fish with bluefish.

Bluefish is a sea species native to the Pacific Ocean. They are aggressive predators with sharp teeth—two attributes they share with piranhas.

Fishermen, surfers, and even people swimming near bluefish schools have suffered some frightening bone-deep injuries from those ferocious set of teeth. Fortunately, bluefish have a non-human diet of sardine-like fish, shrimp, and squid.

Furthermore, bluefish aren’t even related to bluegills or piranhas, either. Piranhas and bluefish are of different habitats. But that hasn’t stopped people from having imaginary matches between the two species. (For the record, a sizable population puts their money on bluefish!)

People have, however, pit bluegills against piranhas in videos found on YouTube. And the carnage is not pretty.

Piranhas and bluegills, both freshwater fish, don’t share the same habitat, either. An expert opines that if a person released their pet piranha in bluegill-infested water, the bluegills would chase the piranha to a territory in the lake or pond that’s not inhabited by them. The piranha would eventually die in the foreign water body.

So, folks, the claim that bluegills are dangerous and related to piranhas is false!