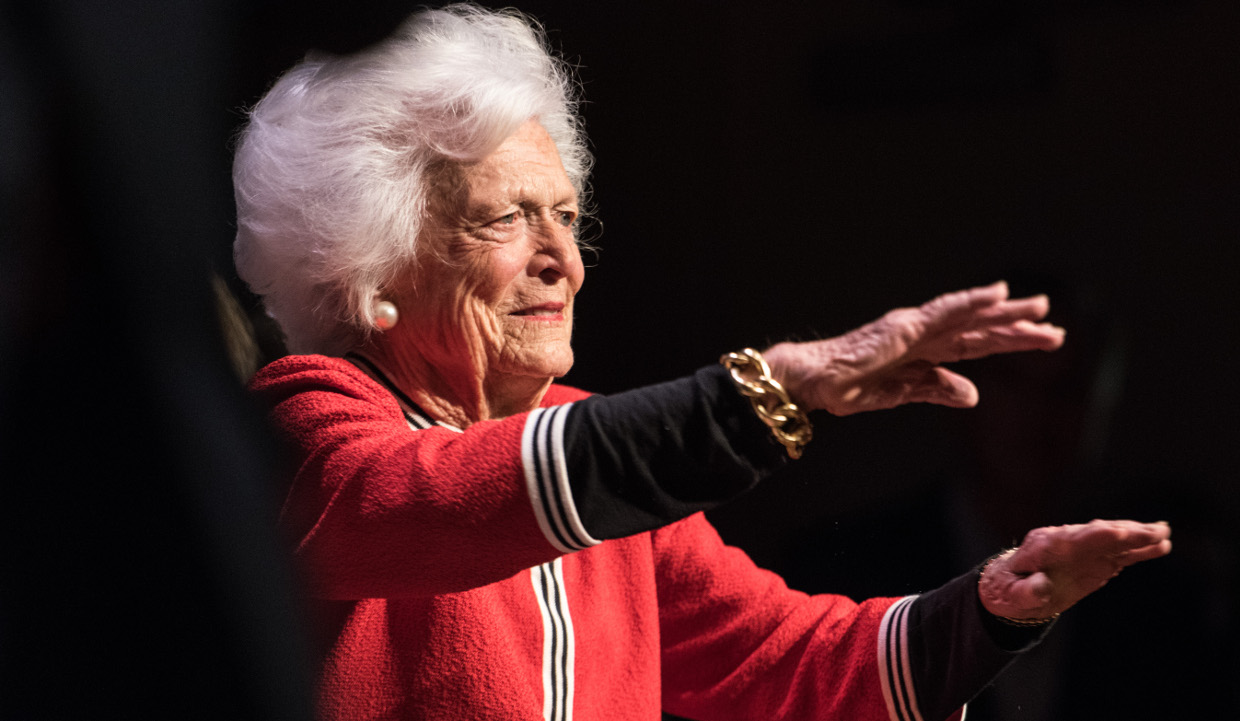 A report from a fake website named Breaking-CNN claims that Barbara Bush passed away on Sunday evening.

A website called Breaking-cnn.com released an article saying Barbara Bush, 92, passed away “peacefully in her sleep” on the evening of Sunday, April 15. Hours earlier on Sunday, the Bush family released a statement saying the former First Lady would not be seeking any more medical care, so naturally, people believed the news. Is Barbara Bush dead? Before you prematurely believe this story, EarnTheNecklace.com is calling out this death hoax!

An alleged report by CNN stated that Barbara Bush passed away in her sleep on Sunday. It was posted by a false CNN breaking news website that went on to say that the nonagenarian had announced hours earlier that she would no longer be seeking medical care for her ailments.

According to a spokesperson for the Bush family, Barbara Bush has been recently hospitalized several times because of her declining health. The ailing former first lady reportedly suffers from COPD and congestive heart failure.

After repeated visits to the hospital, Barbara Bush declined further medical treatment. Instead, she decided to seek comfort care at her home and spend time with her family.

It didn’t take long for an outpouring of condolences to flood social media upon hearing the news of her death.

George H.W. Bush’s presidency wasn’t without problems, as with any other president. But Barbara Bush was more popular than her husband or her sons. She was loved by many and her purported death shocked and saddened many.

While the severity of her condition is not known, the report claiming that Barbara Bush is dead is completely false.

EarnTheNecklace.com is here to explain this latest hoax about Barbara Bush’s death.

The Bush family released a statement that read, “Following a recent series of hospitalizations, and after consulting her family and doctors, Mrs. Bush, now age 92, has decided not to seek additional medical treatment and will instead focus on comfort care.”

Despite the statement only mentioning the Bush matriarch’s health, some sites prematurely reported her death.

Initially, CBS erroneously published a report titled, “DO NOT PUBLISH – Former first lady Barbara Bush d*es at age 92 DO NOT PUBLISH.” Apparently, someone on their end did not heed the three words at the start and end of the headline! Nonetheless, the CBS report vanished in the blink of an eye. (It was likely a publishing error on their part that was caught quickly, but the damage was done!)

And it didn’t end there.

A website named breaking-cnn.com then published a follow-up to the incorrect CBS report! This supposed CNN report claimed that Barbara Bush passed away in her sleep.

However, breaking-cnn.com is a fake website posing as CNN. In truth, the real CNN has not published a report stating that Barbara Bush is dead.

CNN’s Washington Bureau Chief Sam Feist has been personally calling out the fake report on Twitter.

Incorrect. CNN is not reporting that Barbara Bush has died. This is a bogus website posing as CNN. https://t.co/W5R4rZh1vN

“Barbara [Jenna’s twin sister] and I talked to her last night. She’s in great spirits, and she’s a fighter. She’s an enforcer,” said Hager.

Hager is a journalist and correspondent on NBC’s The Today Show. She cleared the air about the hoax going around about her grandmother’s supposed death.

“She reminded me not to believe everything you read, so we’re grateful for her, for everybody’s prayers and thoughts, and just know the world is better because she’s in it,” Hager added.

Barbara Bush isn’t the first personality to fall prey to a death hoax. Even her husband has been killed off one too many times by false reports!

A few have taken the false report seriously and have expressed their grief. However, many have called out the hoax.

Either way, we are happy to report that Barbara Bush is alive and focusing on her health!

I retracted my post about Barbara Bush. CNN posted the report that she died tonight. Now the link is dead. No pun intended. Well, maybe a little.