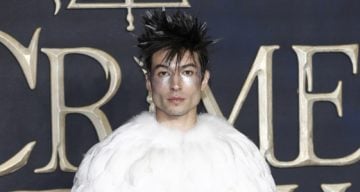 It’s a question that has riddled Filthy Frank followers and Ezra Miller fans since, seemingly, the beginning of time. Are George Miller (aka Joji/Filthy Frank/ Pink Guy) and Ezra Miller related? The YouTuber-turned-singer and the actor’s fans certainly think so. But the facts say otherwise.

Is Ezra Miller Related to Joji?

YouTube titan PewDiePie’s latest video poked fun at some questionable fashion choices, including Ezra Miller’s bold puffer coat gown from the Fantastic Beasts premiere in 2018. In the video, he refers to Ezra as “Filthy Frank’s cousin.” While the Swedish YouTuber admits he’s not sure Filthy Frank and Ezra Miller are related, he’s successfully revived the discussion.

Now, their fans have noted that Joji and Ezra bear a passing resemblance to each other. Their last names are the same, too, leading many to conclude they are at least cousins.

Not only will you find lengthy discussions about their apparent connection on Twitter, YouTube, and other social media, but there are entire Reddit sub-threads discussing whether they are cousins.

In 2016, Joji himself fanned the flames when he referred to the Flash actor as his cousin in a tweet. It was meant to be a joke and that’s probably why Joji deleted the tweet. But their fans believed it to be true.

But there’s no evidence to prove that Joji Miller and Ezra Miller are related, much less first cousins.

In an Instagram Q&A, Ezra even said that he doesn’t have a cousin named Joji. Yet their fans are adamant that they are related.

Joji Miller’s Family Is from Australia and Japan

Joji was born on September 18, 1992 in Osaka, Japan. He keeps his personal details private and rarely talks about his family.

His father is reportedly of Japanese origin, while his mother is Australian. Joji moved from Australia to the U.S. when he was 20. It’s unknown whether his parents had siblings, or if he has any famous cousins.

The tweet where he called Ezra his cousin appears to have been posted in jest. But his followers possibly read too much into it.

Ezra Miller was born on September 30, 1992, and is roughly two weeks younger than Joji. Born and raised in New Jersey, Ezra is the youngest of three children born to Marta Miller (née Koch) and Robert S. Miller.

The Justice League hero, and his two older sisters, Saiya and Caitlin, are Jewish from their father’s side. Their mother has Dutch/German ancestry and comes from a Christian background.

Robert was the senior vice president and managing director of Hyperion Books, and later became a publisher at Workman Publishing. His family background is not known, including whether he has a sibling based in Japan or Australia.

In fact, Miller is such a common family name in many countries, a quick search online will certainly reveal more than one famous Robert Miller and George Miller. But they’re not all one family.

Ezra Miller has no familial connection to Joji Miller. And while we’re breaking down their family ties, neither is related to Greek-Australian filmmaker and director George Miller, either.