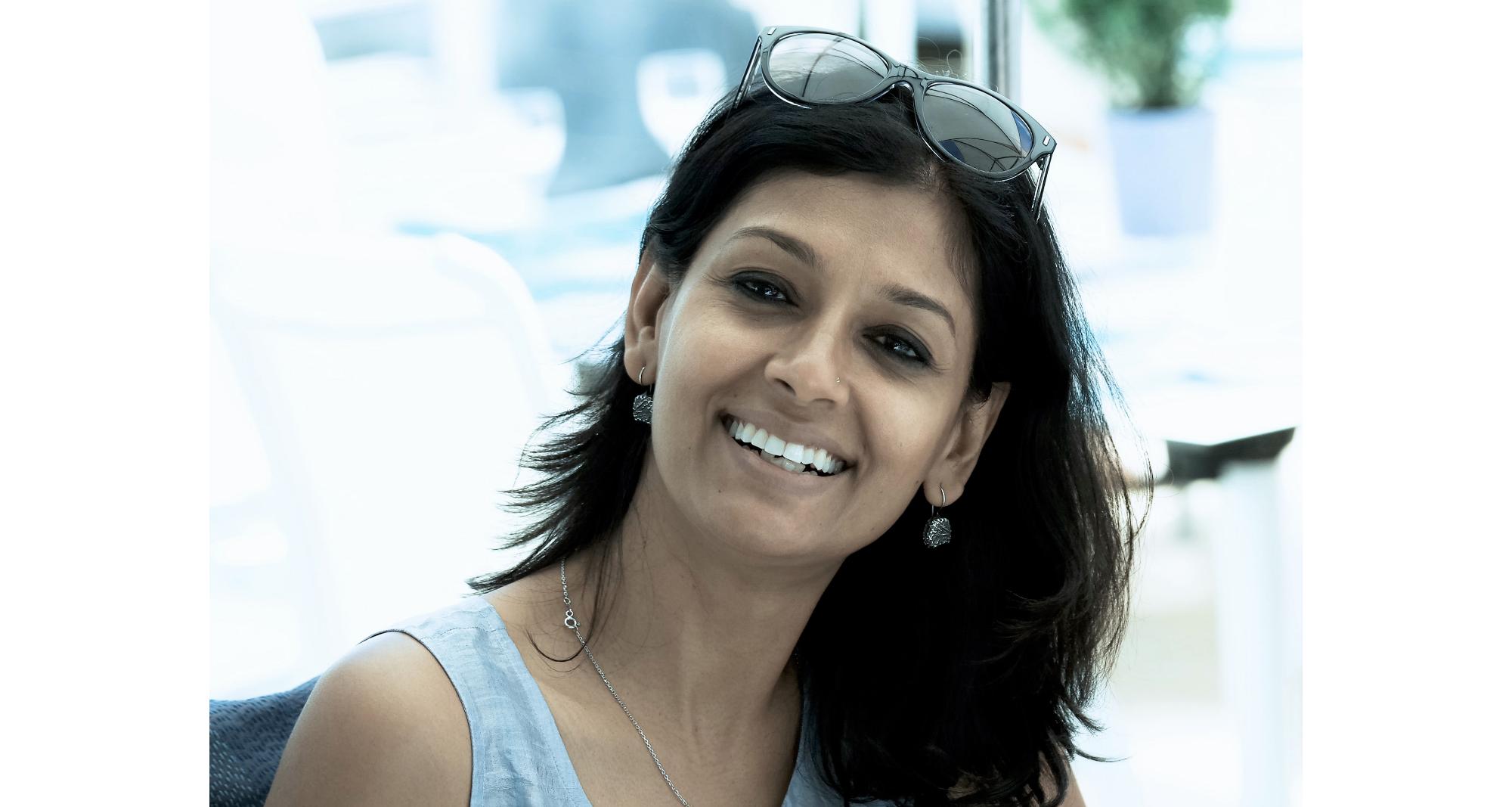 Nandita Das has certainly made a name for herself in India’s entertainment circuit but with her latest project, it’s possible she may strike a chord overseas! Now, at this year’s Toronto International Film Festival, fans will get to see Das’ work behind the camera, instead of in front of it. Her latest film titled Manto will be featured at TIFF 2018 and could really be the one to put her on the map! As fans from all over the world will get to witness her directorial skills at TIFF, Das stays humble in her career as an impeccable actress and a director.

We got the opportunity to ask Nandita Das about the exciting new film and what audiences can expect come festival time. With the best in the industry gathering together at TIFF 2018 September 6-16, this is an opportunity for Das to reach success at an international level—and she’s excited to really showcase her talents! Check out our exclusive interview with her below!

Q: “Manto” has landed a spot within the “Special Presentations” section at this year’s Toronto International Film Festival, what does this achievement mean to you?

A: I see it more as a great opportunity to share the film with the engaged and discerning audience that TIFF attracts. I have been to the festival right from my first film, as an actor.

Q: This is not exactly your “directorial debut” as you’ve been featured at TIFF before. Your last major directorial project (“Firaaq”) was featured a decade ago. Why so long between projects? Did you work on anything in between?

A: Directing, for me, has not been part of any design but more of a means to respond to what goes on around me. While Firaaq was my debut directorial film, I didn’t see myself as a professional filmmaker. I made the film as the story compelled me to. And 10 years later, I am back with a film for exactly the same reason.

I have been very busy with many things over the last 10 years – I wrote, directed and performed a play called Between the Lines. I was the Chairperson of the Children’s Film Society for three years (which I probably took more seriously than I needed to!), I was selected as one of the 16 World Yale Fellows in 2014, I did several speaking engagements, and wrote a monthly column for The Week for eight years. Through most of this time, I also raised my son, who is now eight years old.

The research, writing, securing of funds, shooting etc. for Manto has taken me the last six years! It is only in this last year that I felt equipped, both emotionally and creatively, to tell this story that so needs to be told.

Q: What drew you to “Manto” and the incredible story of the late Urdu writer?

A: What drew me to the story of Manto was his free spirit and his courage to stand up to orthodoxy of all kinds. I was struck by his simple yet profound narratives and the way he insightfully captured the people, politics and times he lived in.

He wrote as he saw, as he felt, without dilution, and with a rare sensitivity and empathy for his characters. He was irreverent and had an irrepressible desire to poke a finger in the eye of the establishment, often with sharp humor.

Manto was unflinchingly honest in his writings about what he saw around him and stood by his truth despite the criticism that came, even from fellow writers and progressives.  His free spiritedness and courage resonated with me. 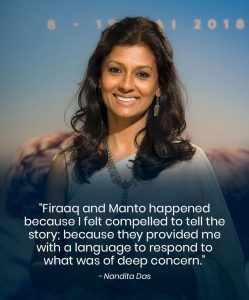 Q: What inspired you to write the story and take it to the big screen?

A: For years I thought of making a film based on Manto’s short stories, even before I made my directorial debut with Firaaq. In 2012, when I delved deeper into Manto’s essays, they helped the idea expand beyond his stories. I did not want to make a cradle to grave biopic. I wanted to tell a story that would celebrate Manto’s unadulterated honesty and invoke his spirit in us.

Manto’s faith in the redemptive power of the written word, through the hardest times, resonates with my own passion to tell stories. In some mystical way, I feel I am part of that hopeful legacy! Through him, I feel I am able to kindle my own conviction for a more liberal and compassionate world.

Q: What message do you hope people take from the film?

A: If I had to choose one, it would be to invoke the Mantoiyat (‘Mantoness’) that I believe exists inside all of us – that ability to be free-spirited and honest, and to have the courage to speak up. I hope Manto will inspire the audience to invoke their own Mantoiyat, however dormant or awakened it may be. After all, don’t we want to be more truthful, courageous, empathetic and free-spirited?

Q: What do you hope to gain from your experience this year at TIFF?

A: Manto is still in the early stages of its festival circuit, so I am still curious to see how different audiences will react and respond to the film. We got an overwhelming response at Cannes, both from the audiences and critics – a 4-minute standing ovation, strangers hugging me, sobbing.

While Cannes has an audience largely comprised of film professionals, whereas both Sydney and now TIFF cater to not only film professionals but also film enthusiasts and the general public. I am looking forward to the interactions with international audiences and media just before the film’s release in India on the 21st of September.

I also look forward to meeting interesting people from the film fraternity, especially distributors who might be able to help in taking Manto to an even wider audience.

One of the events I am most excited to be participating in is the Share Her Journey Rally. I am fortunate to be invited as one of the speakers and I look forward to sharing the stage with fellow women in the industry. As it is a public event, I look forward to engaging with a wide spectrum of people, both men and women, on an issue that has deep personal resonance. It is so important to shed light on the pervasive issue of gender inequality, on important platforms like these. I am glad that the festival is creating the space for such an event.

Also Read: 5 Female Directors to Watch Out at TIFF 2018

Q: You’ve been behind the camera as well as in front of it; which do you prefer and why?

A: For me, these are both different means to express and share my concerns and interests. I wear different hats at different times – actor, director, social advocate – depending on what I want to convey and what medium is the best for it. What I truly relish about directing is the opportunity to do several things, simultaneously.

I have always been a restless person and I need to do different things. The fact that there are so many aspects to making a film is a factor that makes filmmaking exciting for me.

Q: Did you always know you wanted to be involved in the world of entertainment? (At what age did you know?)

A: I did my Masters in Social Work and was happy working with young girls and women who came from an under-privileged backgrounds. Both acting and direction happened by accident. That said, films have provided me with a creative opportunity to share my concerns and use the platform to have conversations about things that matter.

Both the films I directed, Firaaq and Manto, happened because I felt compelled to tell the story; because they provided me with a language to respond to what was of deep concern. I continue to travel the journey of life with multiple interests and concerns, but thankfully without the pressure of proving myself or fearing the consequences.

Q: Was directing always something you knew you wanted to get into or did acting just lead you there?

A: Acting has paid my bills, yet I have always seen it more as an interest than a profession. I have always been more attracted by a script and the director’s vision of translating it into a film, than by the role (which is usually the primary concern of an actor). In retrospect, the director in me was always present even when I was acting.

Even now, I decline acting offers if the story is not compelling, despite the role being potentially exciting. I have done many so-called ‘ordinary’ roles because I really liked the stories. Both Firaaq and Manto were not stories that I looked for, they were the stories that found me.

Q: Finally, what’s next for Nandita Das? Any upcoming roles you’re currently working on? Or will we see you back in the director’s chair with another project?

A: As of now, I am still deeply engaged and invested in Manto and will continue to be for some time, at least until the film releases. I am also working on a book about my journey through this film, so I am not working on anything new as of now. But I have already begun to get projects, which is very encouraging.

I have found three scripts that I am quite interested in, to direct that is. In fact, I have received several projects for acting, as well. But until Manto comes out to the world and journeys around it somewhat, I do not think I will be done with it. But I do look forward to taking a break and getting into acting before I move on to my next directing project. Hopefully, it won’t be another ten years!