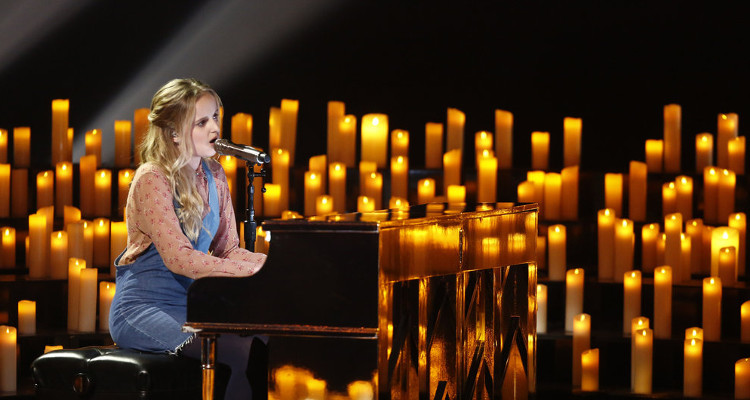 The judges and audience were emotional when they first saw America’s Got Talent contestant Evie Clair talk about her father, who was suffering from terminal colon cancer. She gave moving performances as she progressed on the show, and has now made it to the finals. All of her brilliant performances were dedicated to her father. Unfortunately, he passed away last week, and Clair might not perform at the AGT 2017 Finals.

Participating in America’s Got Talent 2017 has been a very emotional experience for both Evie Clair and her family. When she stepped on stage for her audition, she revealed that her father, Amos Abplanalp, was diagnosed with stage 4 colon cancer about a year ago. The judges and audience were touched by the love and affection Clair had for her father, and many were teary-eyed as the 14-year-old spoke. The sad news is that Evie Clair’s father passed away just after she made it to the America’s Got Talent 2017 Finals. Throughout the competition, Clair dedicated her songs to her father, and if she performs in the finals, there is no doubt that she will dedicate her final performance to him as well. For Evie Clair, America’s Got Talent has been a bitter-sweet experience and producers are letting her decide whether or not she wants to return.

Clair, who is just 14 years old, was very close to her father and described the last few days as the best and worst of her life. She wrote on an Instagram post, “I hope I made you proud, Daddy. I’ve always done it for you, and I’ll do it for you forever.” Brave words from a little girl with a big gift for singing. Clair also wrote, “I’m so grateful for the memories I’ve made with my family in the past year and a half. I’m so grateful for my dad being such a great example of faith and strength. He has endured so much, and all that pain has finally come to an end. He is in a place ’12 gazillion’ times better than this, and I know he is so happy there.”

Also Read: “Americas Got Talent Finalists”: 10 Contestants Who Made It to The “AGT” Finals

How Did Evie Clair’s Dad Die?

Clair’s father suffered from terminal colon cancer and was being kept alive with the help of life-sustaining machines. However, his condition was not improving, prompting Evie Clair’s mother Hillary to make the difficult decision of turning off his life-support.  She wrote about it in her blog, “We watched him take his last breaths as he continued to breathe for about 15 minutes on his own. The children burst into tears but are now at home laughing at old home movies of daddy and remembering our great love for the most wonderful man any of us have ever known.”

For the Love of Her Father

"Say a prayer, a prayer on forever Time is only now, Soon we'll be together." I hope I made you proud, Daddy. I've always done it for you and I'll do it for you forever.❤️

Even before her first performance, Clair spoke about her father’s diagnosis and his great strength in accepting it. This was why she chose to sing Christina Perri’s “Arms.” She said, “When my dad is having rough days, I go to his room, and I sing him this song to help him feel better and just to give him comfort and strength to continue fighting.” Her father fought as best he could, but his illness got the better of him. Though Clair’s father has passed, he will always live in his family’s heart and continue to give them strength and inspire his children. There is no word yet on whether or not Clair will be performing at the AGT 2017 Finals. If she does, we know she will give another heart-rendering and emotional performance. It will be an homage to the man who gave her so much. At this sad moment, everybody’s thoughts and prayers are with Clair and her family.