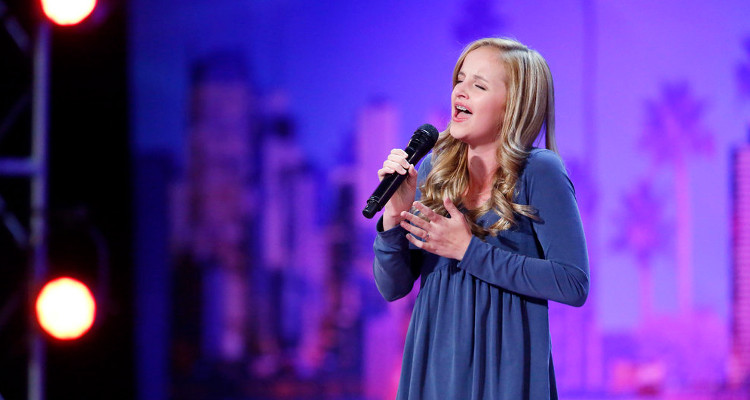 A 13-year-old nearly moved the AGT judges to tears with her poignant performance last night. Meet Evie Clair, a young girl from a small town in Arizona, who took the America’s Got Talent stage on Tuesday (June 20) night and left the entire arena emotional. Clair sang Christina Perri’s 2011 song, “Arms” with palpable intensity and honesty in her voice. If you want to know more about Evie Clair and her life in a small town, then our Evie Clair wiki is just for you!

Evie Clair is 13-year-old singer from Florence, Arizona. She discovered her knack for singing and playing the piano when she was two years old. When she was in kindergarten, she performed at her school’s talent show and in no time became a hit!

Her first public appearance came when she was just eight years old. She played Molly in Anne at the Hale Theater. From there, Clair took part in a number of competitions in and around her hometown. As word about her incredible vocal talent spread, a big opportunity came along in 2015. Evie Clair won a competition to sing the theme for the film, Once I Was a Beehive.

Not only did she provide the vocals for the theme song, she also had an original song featured in the film! Yes, the talented singer is a gifted songwriter, as well! Clair got the opportunity to belt out the song at the movie’s official premiere. This was a major boost to the young girl’s dream of becoming a singer.

Clair attributes her musical success to her faith as a member of the Church of Jesus Christ of Latter-day Saints.

The 13-year-old is a rising star, who already accomplished some big things before she took the AGT stage. She sang the national anthem at a Diamondbacks game, recorded and released two original singles, won in her category at 2014 Arizona’s Rockin’ with Talent, and received one of three Judges Choice awards in an international contest for her cover of “Glorious” by David Archuleta.

Clair also did a music video cover for A-ha’s “Take On Me,” which was awarded by Arizona Interfaith Movement for promoting the Golden Rule and was presented at the Parliament of the World’s Religions.

Evie Clair is quite popular in Arizona and she is a singing sensation in the making. She has recorded with artists like Rob Gardener for the soundtrack of The Cokeville Miracle and recorded as a soloist on an album produced by Arizona Golden Rule Educational Experiences called Stars Shine Brightly. Clair also had the privilege of opening for The Duttons, and in both 2015 and 2016, she was invited to participate in the worldwide Mormon.org special Christmas initiatives.

Clair released her latest pop single, “Love You One More Time” on iTunes and Amazon, Pandora, Spotify, and other online music outlets. You will also find videos of Evie Claire singing on YouTube.

Also Read: Oscar Hernandez on “America’s Got Talent:” Flaunting All the Right Moves!

On America’s Got Talent

Evie Clair made everyone on AGT choke up with emotion as she shared her journey. During her audition for America’s Got Talent, the 13-year-old opened up about her father’s battle with cancer and revealed that he still works to support his family.

About a year ago, Evie Clair’s father was diagnosed with stage four colon cancer, and continued to work at the local prison throughout his treatment. She chose to perform the song “Arms” by Christina Perri because it is close to her heart and is very personal; she sings it to her father when he has a rough day to encourage and reassure him.

Judge Simon Cowell seemed empathetic as he saw Evie Clair’s eyes well up with tears. After taking a moment to collect herself, she made her parents proud, and killed it on stage, hitting every note and touching everyone’s heart with her soulful ballad.

We wish Evie Clair all the luck on America’s Got Talent!