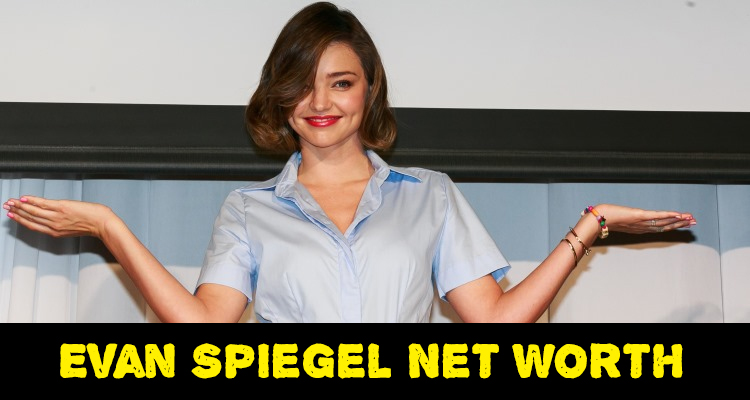 Now that Miranda Kerr and Evan Spiegel are engaged, the rest of the world has questions about the newest power couple. Fans interested in the couple’s love story have been scouring the Internet for the Evan Spiegel net worth and anything else related to the multi-billionaire, all because of the latest headlines reading, “Miranda Kerr engaged.” Now that she has turned from Evan Spiegel’s girlfriend to Evan Spiegel’s fiancée, many are wondering just how much is Evan Spiegel worth? You’ll find out, after reading our article on the Snapchat CEO’s net worth.

Evan Thomas Spiegel was born on June 4, 1990 in Los Angeles, California and is an Internet entrepreneur and Snapchat co-founder. He is the son of two lawyers, parents Melissa Ann Thomas and John W. Spiegel. Evan grew up in Pacific Palisades, California, where his family grew up in the Episcopalian faith.

Spiegel was educated at the Crossroads School of Arts and Sciences in Santa Monica and while he was still in high school he took design classes at the Otis College of Art and Design. He also attended Stanford University but dropped out before completing his degree in order to devote all of his time to developing Snapchat. We think it’s safe to say that his risk paid off.

What started off as a school project for a class at Stanford soon became a very profitable business venture. Snapchat is one of the most popular apps on cell phones today. Many who aren’t already on Snapchat have at least heard of the popular app. The app itself, allows the person to take a selfie or a video that deletes itself. The person is also able to save a picture of the selfie, which usually has a caption across the picture. Users can also employ the app’s visual effects and functions that can alter their image.

Spiegel may have given himself the title of CEO, but he didn’t create the viral app all by himself. Co-founders Reggie Brown and Robert Murphy were also responsible for the creation of the social media app back in 2011. Evan’s net worth is substantially larger than when he first entered Stanford, estimated at $2.1 billion as of last year, according to Forbes.

Facebook’s founder, Mark Zuckerberg tried to acquire the company for $3.0 billion but Spiegel declined at the time. Spiegel may not be as wealthy as Zuckerberg, but he was smart enough to keep his app. If had accepted the offer, his net worth would be far less and he wouldn’t be able to cash in on future revenue due to the app’s success.

And in case you are unsatisfied with your salary at your age now, you should know that Spiegel has managed to become one of the world’s youngest billionaires, as Evan Spiegel’s age is only 26! How’s that for motivation?

The engagement heard around the world still has the Internet buzzing after Spiegel popped the question to 33-year-old Australian Victoria’s Secret supermodel, Miranda Kerr. In 2014, the couple met at a Louis Vuitton dinner party in New York City and started officially dating sometime last year. Fast forward to now—tired of being just another Miranda Kerr boyfriend—Spiegel decided to propose to his model girlfriend using Instagram with an illustrated version of themselves. Spoiler alert: She said yes, but we’re more shocked that Spiegel didn’t use Snapchat to promote his own proposal!

This is the first marriage for Spiegel and a second for Kerr, who was married to ex-husband Orlando Bloom, with whom she has a 5-year-old son named Flynn.

The Evan Spiegel house is exactly as lavish as you’d expect it to be, given his status and wealth. Spiegel and Kerr have purchased a Brentwood mansion in Los Angeles, for a mere $12.0 million. The beautiful 7,164 square-foot mansion has seven bedrooms, a pool and pool house, a home gym, and a guest house. We can only imagine how may bathrooms it has, but maybe the couple are planning to expand their family. Renowned architect, Gerard Colcord designed the large and opulent house, which previously belonged to Harrison Ford.