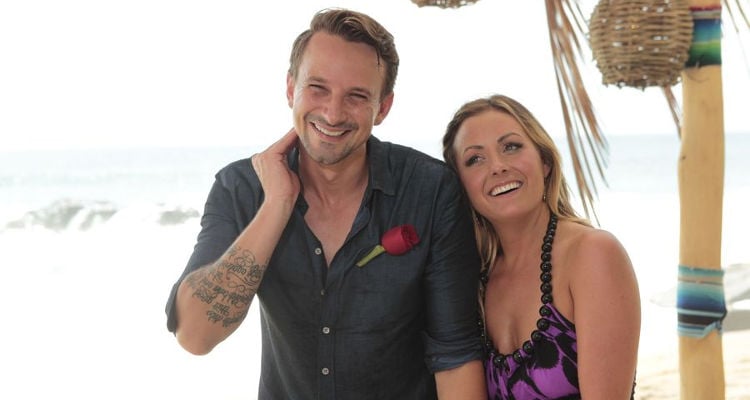 Bachelor in Paradise wrapped up season 3 in a two-part season finale on Monday and Tuesday nights and the finale didn’t disappoint. Grant and Lace got engaged amid some pointless panic and confusion. Meanwhile, Nick and Jen went their separate ways. Single parents, Evan and Amanda finally found true love with Carly and Josh, and also accepted proposals. It seems the couples have also met their fiances’ children, specifically Josh, who was spotted at Target with Amanda and her daughters. Carly is said to have met Evan’s sons, but Evan prefers to keep his children out of the spotlight. The 33-year-old has had quite the run on reality TV and has kept most of his personal life under wraps. For curious fans googling terms like, “Evan from Bachelorette,” “Evan from Bachelor in Paradise kids,” “Evan Bachelor in Paradise ex wife,” and ” is Evan Bass a doctor?” you’ve come to the right place.

I FREAKING LOVE THIS GIRL. (Also, snuck the lizard hanging from my shirt out of #afterparadise)

Evan Bass starred in The Bachelorette Season 12 and has three sons, Ensley, Liam and Nathan, with ex-wife Marie Ward. Evan projects an image of a good dad distancing himself from the show’s sexual group dates because he has to be a role model for his sons, but Marie begs to differ. In an online post, Marie called her ex-husband a dead-beat dad, who only wants fame and money. Isn’t that a criteria to join reality TV?

Here are some interesting facts about the man who’s going to tie the knot (hopefully) with Carly Waddell.

In 2011, Bass and his then wife, Marie filed for Chapter 7 Bankruptcy. They owed over $223,000 from outstanding credit card payments, loans, a business lawsuit and more. The case was discharged in 2012.

Bass’ clinic has had some rather well-known clients including Johnny Knoxville of Jackass fame and Daymond John from Shark Tank.

It was a blink-and-you-miss-it moment on The Bachelorette when Bass said he used to be a Pastor before transitioning to a sexual health doctor! That’s right! In his own words, “I’ve found a different way to lift people’s spirits.”

Bass is known to keep his children out of his social media posts so they don’t have to deal with the problems that come from being in the limelight. So, what exactly does he post on social media? His pets. He has a German Shepherd and an adorable little dog named Waldo, whom he calls his traveling companion.

A dog and his gulch..and a power box thingy

Bass’ bio on abc.go.com mentions his criteria for the girl he wants to date. The list of deal-breakers include girls who are overly talkative, narcissistic, clingy, girls with serious food allergies and girls with chipped nail polish. Let’s hope Carly read his bio and got a manicure!