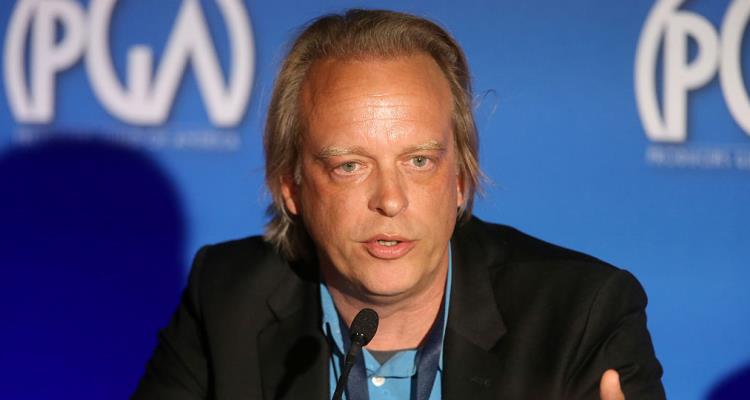 Scandal is one of the biggest shows on television today and is definitely one of the leaders in “water cooler talk” at the office. People are always talking about the latest backstabbing, the latest affair, and the latest political move. But alas, Scandal is starting to come to an end. Luckily, via the magic of Skype, we got to sit down with Oliver Bokelberg. Oliver has worked on Scandal from the very beginning as a cinematographer and then moved on to direct a number of episodes. We got to talk about his beginnings in Hollywood, how Oliver helped make Scandal look realistic, as well as discuss his work in film.

How did you did you get into the technical side of film? I know your dad was an actor…

Oliver: Actually, he was an actor only briefly, he was also a still photographer on the movie side and then he became a successful advertisement photographer, so I kind of grew up in the photo studio.

That would definitely make sense why you ended up leaning into being a cinematographer!

Oliver: Yeah. So, I grew up in a photo studio and from there, I just needed to change it up a little bit so I went to film school at NYU.

Were you already living in New York at that point?

Did you move for school? Because that can be a little bit of a culture shock.

Oliver: Yeah, but it was a good culture shock though (laughs). I loved it. I moved to New York in 1985 straight from Germany and much to the unhappiness of my parents, I never really returned (laughs).

You’ve done well for yourself so I’m sure they’re happy that way, right?

Oliver: It’s been good. I got fortunate. I had some good teachers and I enjoyed NYU. My mentor there, Boris Frumin, was a Russian filmmaker and right when I graduated NYU in 1988, Yo MTV Raps started up so there was a big demand for rap videos. I had a 16mm camera and I just started shooting just about every east coast rap artist at the time. Stereo MCs, Shabba Ranks, KRS-One, Audio 2, LL (Cool J), I probably did 75 videos or so.

You were kind of perfectly timed getting into music videos, especially with that being the heyday of east coast hip-hop at the time.

Oliver: It was perfect (laughs). I was fortunate. At that time I was 24, a young German kid. They all wanted to be on camera. It was very exciting!

You’ve worked as a DP much of your career but recently you’ve been doing a lot of directing, especially with Scandal. Was directing always the goal or did it just kind of happen naturally?

Oliver: When I started film school, I wanted to direct. I sort of turned into being a cinematographer because I guess I showed some talent and that sort of became my career.I’ve gotten better at it, I really enjoyed it. I really liked it and I still love it but when we started Scandal, I voiced my interest that I would like to start directing and in the second season, another director kind of fell out and they gave me the opportunity. I really enjoyed it and I really enjoy both. Right now, I’ve directed 10 episodes of Scandal and I’m still cinematographer for every other one.

Are you pulling double duty when you’re directing?

Oliver: It’s kind of interesting. It’s kind of my set up over at Shondaland, Shonda Rhimes’ company, they’re very supportive as a company so we tend to step somebody up so my camera operators end up being my DPs for those episodes, much in the same way I got my opportunity. So, it’s a chance for them to broaden their horizons.

Oliver: Yeah, it’s great, it really makes you want to be there.

You worked as a DP with Scandal up until you got the directing job; what’s the transition like going from DP to director?

Oliver: I’m sure it was a great way in as the actors were very supportive of me. They knew me and I’m pretty sincere with what I can do. I’ve got to film it in a way that I believe it. If I don’t believe it, I try to find a way to make it believable. I’ll turn the lights off or find a different angle or look in on it with how can my camera work help to make something seem authentic. I think that tendency helped me get into directing. Ultimately it’s the same thing for me to work with actors and movement and dialogue and get it to the point where you believe it. Certainly, those actors make it easy but it still has to check out.

Since Scandal is set in the real world with real life type of events like press conferences and newscasts, how do you balance the realism of a situation on the show with making it look good for television?

Oliver: It’s a little bit about an attitude, I guess. It’s about not becoming too precious with things. That’s sort of how we treat it, I think. A little bit of sloppiness helps make something believable. Stuff in other scenarios that you would try to control, like lens flares and glares or having too many things in the way of the picture, so we want to see more. I think the attitude is as if we are looking in on something, as if we are walking down the street and I’m looking through somebody’s window and I see that there’s an argument or there’s a kiss. I think we’re trying to recall those moments just by looking in again, looking in through a window, or looking over someone’s shoulder, whipping the camera on to something too late. I always tell my camera operators, if you want to see it, show it to me. We don’t repeat camera moves, we are always trying to keep it fresh. I think that we’re not always successful but if we succeed it’s good, it helps to stay real… if that makes sense (laughs).

What’s the best part about working on Scandal?

Oliver: I’ve been there for 7 years, so it’s become a family. It’s a place where we want to be, which is amazing. It starts with Shonda (Rhimes, series creator) and Kerry Washington… the entire cast are just genuinely great people. It’s a family and not once do I come home and say ‘I don’t want to do this anymore.’ Every morning, we like going to work. It’s rare as a filmmaker and cinematographer… I’ve never done a TV show that long before so it’s unusual to have a job; it’s unusual to have a job that you work for 6 years every July until April, and every April you know that you’re coming back in July. So, you know you have two months to do another show during those two months, or maybe you take those two months off. But it’s an extraordinary luxury as a filmmaker to be in that situation with people you want to be in it with.

And you’ve been there since the pilot?

Oliver: Since the pilot, yeah. So, you know you create something and you are part of this dream that we’ve created and it’s a lot of fun to be on a popular show. I drop my daughter off at Debbie Allen’s dance academy and I hear all of the mom’s talking on Friday morning about what happened that night, everyone’s talking Scandal! It’s nice to be on something so popular.

Going through you’re IMDB page for this movie, I was happily surprised to notice that you worked on a little film that I love called The Station Agent…

Oliver: One of my favorite movies.

Oliver: That probably only comes around once because…. you called it a ‘little film,’ that’s because it was a little film, it was very small. I made a movie with (writer/director) Tom McCarthy when Tom McCarthy was an actor called The Citizen, which we shot in 1999 and Tom was talking about the script idea for it, I think at the time it was called The Conductor. So, we became friends and started meeting about the story every other week or so and just talk about it and look at movies together and sort of get an idea. Then I went to Germany for a couple of years doing some shows and eventually Tom called and says, ‘I have the money together, I have about $500,000 dollars, let’s make the film!’

We had twenty days, in New Jersey and we were all together, the entire cast, it was kind of comical if you look at it now: Michelle Williams, Bobby Cannavale, Pete (Peter Dinklage). It did a lot of good things for a lot of us. We were all friends, we all stayed out in this little town. I probably don’t know how to make a movie like that anymore, you know? The machine gets very big and what shows there is such a love story between the filmmakers and the actors. Because we were so small, there was a picnic scene with Patricia Clarkson sitting outside the hot dog truck and it needed to be sunny that day but it was rainy that day. In small movies when you’re all together, we were able to decide that morning, ‘No, let’s shoot Peter arriving at the train depot for the first time.’ It was the perfect atmosphere, it was drizzling, and miserable. Those are the kind of little magic moments that you are able to create because you don’t have the big machinery with you and shows. It really was a labor of love. We went to Sundance with it and it became the audience favorite! It bonded all of us forever, you know? Tom and all the actors, we’re all still good friends because of that movie. It’s still my favorite film.

Now that Scandal is coming to an end, are you thinking you’re going to lean more towards directing or cinematography?

Oliver: I’m not able to predict it. I think it will come. I would like to make a film again. Distribution has changed so much over the years, MTV has changed so much, it’s all become a hybrid system between Netflix and things like that. All of these new forms of distribution, it’s probably some sort of golden age for the filmmaker because I think you can get the singular voice going again. Something like The Station Agent uses a group of people without too many outside voices. I don’t know, we’ll see, I’m scared and excited.

How many more episodes of Scandal do you have left to shoot?

Oliver: I think there was 8 or 9 as of yesterday. We are halfway through the final season.

Can You watch movies and television the same way even though you work in the industry?

Oliver: I fall for the story. I don’t watch the technical side most of the time. It doesn’t affect me, I get way too emotional when I watch films. Unless the camera gets in the way or the camera draws attention to itself and it pulls me out of the story.