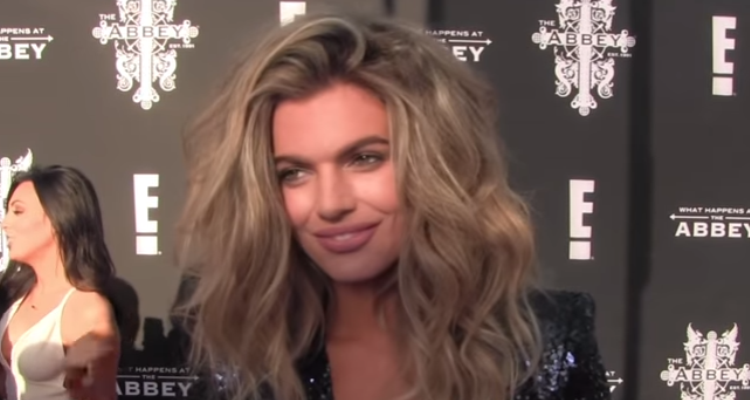 If you haven’t watched the hit E! reality TV show, What Happens at The Abbey, then you need to binge watch it, right now! It’s based on Los Angeles’ leading gay nightclub, and the professional and personal lives of the employees that work there.

One cast member in particular that you have to check out is heiress, Ashlee Lian. While fans are still waiting for confirmation on What Happens at The Abbey season 2, we caught up with the reality star so that fans could get to know her better. Not only does she have two dogs named Thor and Cleo, she’s more than just another pretty Hollywood face. We got to chat with Ashlee Lian and we asked her about everything from dating, to her family fortune, to what she looks for in a man! (Take notes, boys, this one’s a keeper!)

Q: We hear you’re an heiress! Where does your family’s fortune come from?

A: My grandfather was a clothing manufacturer and owner of his company called Tapestry, as well some other businesses. I remember one time when I was in second grade I asked him to make me a dress and he did it—I felt so special.

Q: How did you first meet Chelsea?

A: I met Chelsea through mutual friends in L.A. We got closer when we were filming and it let me see a different side to her. It’s hard to make friends in L.A. and I definitely think the show showcases that.

heavens a heartbreak away

Q: How do you think you left things with Billy? Is there a new boyfriend in the mix?

A: Well, currently we aren’t together, but it happens, life goes on. Right now I’m single.

Q: Where do you go to meet guys? What do you look for in a guy?

A: I don’t really. I wish there was an aisle at Whole Foods—gluten free or something [laughs]! I’d rather a guy not come up to me. And you have to be funny, because then you won’t get my humor.

because we have more fun @hairbyshaylee ?⚡️

Q: What do you do for fun? What are your favorite hot spots in the city?

A: Aside from The Abbey of course, I love Zinc—they have margaritas! Usually I’ll start there and then go out to The Abbey. But unfortunately for me, it’s hard to drink. I wish could, but I’m not that big a drinker. But I enjoy the after effect.

Q: We saw a clip of you visiting a financial planner. How’s the job search and money management going?

A: She was so mean. I rewrote her plan and I even did her chart. I just thought she was a bitch, and I was gonna take a picture of me saying I read her book, but not anymore. And before that she thought I used botox! I was like 24 at the time we shot that! But I have an entrepreneur mindset and I want to do something that involves fashion and healthy eating. I like eating healthy food that doesn’t  compromise taste. I make this fettuccine Alfredo with a healthy twist; instead of cream I use Greek yogurt—it’s insane.

Q: Is there anyone you really didn’t like on the show? Any enemies that come to mind? (We saw some juicy drama last season!)

A: Oh for sure! I hate Kyle—as a human being he’s just so obnoxious. I blocked him on social media and then he sent everyone but me a screen shot saying ‘Ashlee blocked me’. (Because that’s how grown men do it, right?) I thought it was pretty obvious on the show, the way he treats women in general.

Still dreaming about last night pls nobody wake me up ? huge thank you to everyone who came out last night and made it a huge success ?? and thank you to the team we would all be nowhere without @eentertainment @theabbeyone @adamstotsky @sillybillythings #RAY #CAROLINE @davidcooleyla @abruscato @hairbyshaylee you god you @everyoneelse THANK YOU THANK YOU THANK YOU ?⭐️?⭐️?⭐️? #grateful #af #didiusethatright #whata #whathappensattheabbey

Q: What can you tell us about season 2? Do you know if we can expect to see more of you and the gang?

A: We don’t know anything yet, but I’d be super excited! There’s so much more people didn’t see from the first season, too!

A: I just think he’s so in love and he keeps getting sucked back in. Like, dude, you can do so much better.

Q: What keeps you busy outside of the Abbey?

A: I recently got a new puppy so that combined with starting Supermodel Foodies has been taking up most of my time. I’m also working on my own lifestyle blog, it consists of things I dig and love around L.A.— places I like to shop and foods I like to eat too much of. I’m a big foodie and love cooking so I’ve been working on finding recipes that are healthy and delicious and at the same time. That’s how I stumbled upon the concept of Supermodel Foodies, the raw desert company I’m starting. I mean, who doesn’t want to be able to have their cake and eat it too… without gaining 500 pounds.

Q: How has being on the show/ reality TV affected your life?

A: Since being on the show, more girls smile at me (laughs) is that weird? I feel like I connect more with women now. I think I’ve been able to be understood more through the show and honestly I think it’s a great time to be a woman and support each other. Before the show, I used to only get dirty looks… now it’s 50/50. Oh and my social media presence is better. I was anti-social media before the show, I literally had 5 followers and no idea how to tweet.

Q: What’s in store for you in the future, acting at all?

A: Acting for sure. I always valued acting and I studied acting at (Tische) NYU and it’s something I want to explore deeper. So we will see!