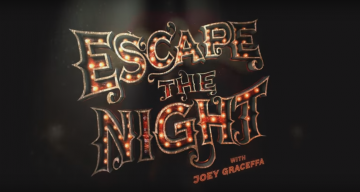 Season 3 of the popular YouTube show, Escape the Night, premiered on June 21, 2018, on the web site’s premium video-sharing channel. Now, YouTube Premium viewers are anxiously waiting for episode 3 to be aired. We have details on how to watch Escape the Night season 3, episode 3!

Ever since Escape the Night premiered on June 22, 2016, on YouTube Red (now YouTube Premium), it has become a hit among viewers who love its endless twisting plots and familiar YouTube celebrities. It is an American meta fictional murder mystery-based reality competition hosted by Joey Graceffa.

Escape the Night follows “The Savant” (Joey Graceffa) as he finds himself in past eras where guests go on a journey that forces them to take on different personas from that specific time period/place. Once they are there, all contact is cut off from the present, and they have to survive the period and escape from the dangers that are after them.

To do this, the guests team up with Graceffa and compete among themselves to escape these post-modern nightmares by taking part in challenges, like solving escape room puzzles. At the end of each episode, two voted guests compete with each other to see who continues on. The losing guest is removed through a (highly dramatic) fictional death, while one or more guests ultimately win and are sent back to the modern world.

Viewers are hooked on this exciting series and are wondering how they can watch Escape the Night season 3.

This time around, the carnival is in town. And it’s the creepiest carnival ever. So, the gang is back to take on a night of horrific challenges and new deaths in the post-modern, unscripted fashion fans have come to absolutely love! This season’s cast includes some of your YouTube favorites, like Manny Mua, Rosanna Pansino, and Matthew Patrick.


What Time Does Escape the Night Season 3 Come On?

All new Escape the Night season 3 episodes will premiere every Wednesday at 11:00 a.m. PST all summer long. So, don’t forget to watch them!

When Does Escape the Night Season 3, Episode 3 Premiere?

Escape the Night season 3, episode 3 premieres on YouTube Premium at 11:00 a.m. PST on Wednesday, June 27, 2018. It promises to be a real thriller, and if it’s anything like last season’s heartpounding “Masquerade Party,” season 3’s Circus from Hell theme will be a real hit!

Graceffa has revealed his experience in filming the series saying, “It was a really fun concept to put together,” adding, “And it was an idea that started small and ended up into something much bigger.”

With the way viewers are responding to the series, Escape the Night will only get more popular in the episodes to come.