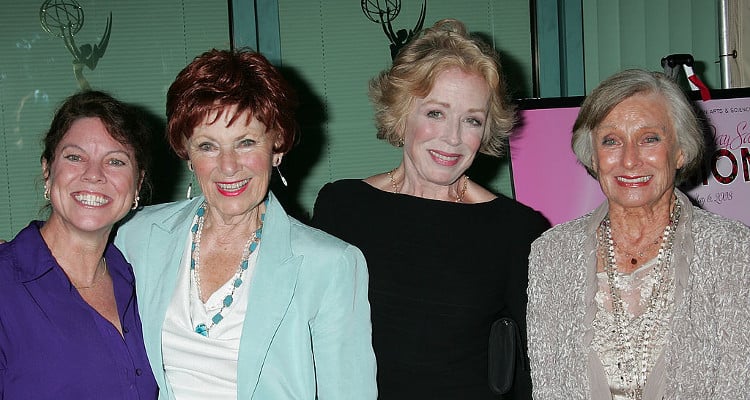 Erin Moran was most known for her role as Joanie Cunningham in the popular ‘70s sitcom, Happy Days. She was found dead on April 22, 2017 at the age of 56.

Former child star, Erin Moran, who famously played Joanie Cunningham in the sitcom Happy Days, passed away on April 22. She had a great acting legacy, but her personal life appeared to be in shambles. While condolences at the passing of this great star pour in, people are also asking about Erin Moran’s cause of death. The days leading up to her death weren’t as we’d expect from a famous actress. Here’s everything to know about her in our Erin Moran wiki.

Moran was born in Burbank, California and raised in North Hollywood. She comes from a large family of six children born to Sharon and Edward Moran. Moran was the second youngest in the family, and her brothers, Tony and John, and sister, Kelly are also all actors. She wanted to be an actress from a young age, and her supportive mother signed her up with an agent when she was five years old.

Erin Moran began her career doing commercials and TV shows until she made her feature film debut with Debbie Reynolds in How Sweet It Is! She played minor roles in several TV shows before she got her big break at the age of 13 as Joanie Cunningham in Happy Days. She played the principal character Richie Cunningham’s sister, which remains her most memorable character to date.

She was later cast in the short-lived spin-off, Joanie Loves Chachi, alongside Scott Baio. Moran had reluctantly accepted that role and stated she would have preferred to remain on Happy Days. After the spin-off was canceled, she returned for the final season of Happy Days.

While doing several guest appearances on TV, she starred in the horror movie, Galaxy of Terror that gained a cult following. She was also a contestant on VH1’s, Celebrity Fit Club. There were reports claiming that she would reunite with her Happy Days costars, Henry Winkler, Scott Baio, and Ron Howard in Arrested Development, but nothing materialized.

Moran was one of many child artists who fell victim to the curse of early fame. While Happy Days enjoyed a 10-year run, her own spin-off didn’t last past 17 episodes. Her acting career saw a swift decline after the end of Happy Days. She was only 22 when the show ended, but her career didn’t take off.

She opened up about the downsides of growing up on screen. Moran grew up on the set of Happy Days and shared that when she turned 15, producers were pressuring her to lose weight and wear more revealing outfits. In the mid-1980s, the young Moran swore off Hollywood and left LA. In a later interview, she said she suffered from depression due to acting offers drying up.

The latest estimates say her net worth is around $50,000. Moran lived off a $65,000 settlement from CBS when she had filed a lawsuit against the network to get her dues from her contract. She lost her California home to foreclosure in 2010.

Erin Moran was first married to a man named Rocky Ferguson. It wasn’t an ideal marriage, as she said he didn’t like her fame. “He wanted me to lie in who I was and if anyone recognized me to say no I wasn’t,” she said. “And that’s the pressure he put on me.” The pair divorced in 1993.

She later married, Steven Fleischmann, a Walmart employee, in 1993 and she moved to Indiana with him. They lived in a trailer with Fleischmann’s mother, so Moran could act as her caregiver. Moran didn’t have children with either of her husbands.

Such sad sad news. RIP Erin. I'll always choose to remember you on our show making scenes better, getting laughs and lighting up tv screens. https://t.co/8HmdL0JKlf

On April 22, authorities were alerted to an unresponsive female, later identified as Erin Moran in Indiana. The 56-year-old was pronounced dead and further details are pending.

Moran struggled with drugs and alcoholism for the past few years. She and Fleischmann lived in a mobile home in Indiana off of a cash settlement Moran received, after filing a lawsuit against CBS. However, Fleischmann’s mother reportedly threw her out for her excessive partying.

After her death, her Happy Days costars expressed their grief on social media. Henry Winkler, Willie Aames, Ron Howard, Scott Baio, Chris Kattan, and David Campbell were some of her colleagues and celebs saddened by her untimely death.