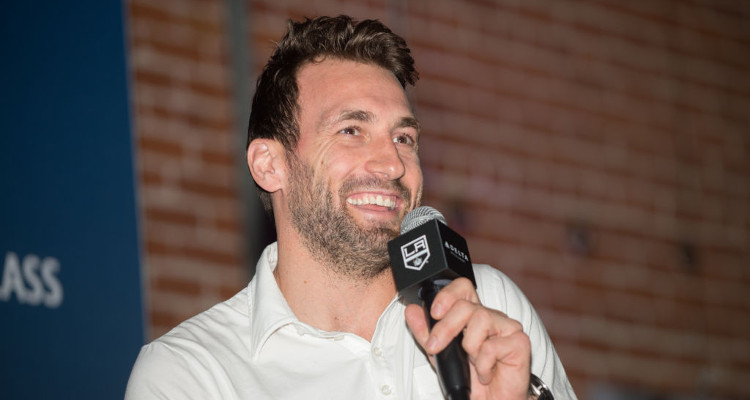 During his days as a hockey player, Jarret Stoll was known as a team player. After his retirement, Stoll accepted a job offer as a talent scout for the Los Angeles Kings and started his own philanthropic activities. He married sportscaster, Erin Andrews on June 24, 2017, and is looking forward to a happy future with his new wife. With a net worth of $16.0 million and a new perspective on life, Stoll is a happy man.

Jarret Stoll and Erin Andrews are officially husband and wife. The former NHL player married the sportscaster on Saturday, June 24, 2017. Jarret Stoll and Erin Andrews’ wedding took place mountainside at the Yellowstone Club near Yellowstone National Park in the picturesque state of Montana. Erin Andrews’ husband was ecstatic during the ceremony, and the couple invited guests like Joe Buck and Michael Strahan to their special day. Being a sportscaster for ESPN and Fox, as well as her stint hosting Dancing with the Stars, Andrews is a familiar face. But who is Jarret Stoll? Keep reading for more details about the former NHL star.

Born on June 24, 1982 in Melville, Saskatchewan, Canada, Jarret Stoll’s age is 35. He is a Canadian former professional hockey player, who played in the NHL from 2002 to 2016. Stoll fell in love with the sport at a young age and played for his school teams. He attended Sacred Heart High School and St. Joseph High School, where he won the bantam championship. He played for the Kootenay Ice during his WHL career and led the team to a Memorial Cup Championship as captain. Stoll then entered the 2002 NHL Entry Draft, where his professional career would begin.

Winning is a Wonderful Thing

Jarret Stoll’s NHL career was spent playing for several teams like the Edmonton Oilers, Los Angeles Kings, New York Rangers, and Minnesota Wild. Stoll’s stint with the Los Angeles Kings was particularly successful because he won the Stanley Cup twice while playing for them. His first Stanley Cup win came in 2012 against the New Jersey Devils, while his second came in 2014 against the New York Rangers. Even though Stoll never formally announced his retirement from the NHL, he made it clear that he was quitting the game by accepting a position as a talent scout for the Los Angeles Kings on December 15, 2016.

Jarret Stoll’s salary as a scout is not known. However, thanks to his professional hockey career, Jarret Stoll’s net worth is a healthy $16.0 million and likely to grow as he continues to move up the NHL ladder. His vast knowledge of the game and his impressive playing skills have made him a valuable asset for the Kings, and he is sure to be compensated well for his contributions.

After earning so much from the game, Stoll started his own charitable organization called the Jarret Stoll Comfort Fund, which benefited from an annual charity golf tournament the former NHL player organized from 2006 to 2011 in Saskatoon, Saskatchewan. However, Stoll has also gotten in trouble with the law not too long ago. In the summer of 2015, he was arrested for having cocaine and ecstasy on his person at a hotel in Las Vegas, Nevada. He pleaded guilty to two misdemeanors and the matter was resolved.

A Good Heart is Hard to Find

His love life was not without its own ups and downs. Stoll was engaged to actress and model Rachel Hunter (who is 13 years older than him) and had planned to marry her in August 2009, but the marriage was called off. It was after this heartbreaking incident that Erin Andrews entered Jarrett Stoll’s life and the two got engaged. When he married Andrews on June 24, 2017, it was the happiest moment of his life. With money in the bank, a job he loves, and a great woman by his side, Stoll is ready for the future —whatever it might be!