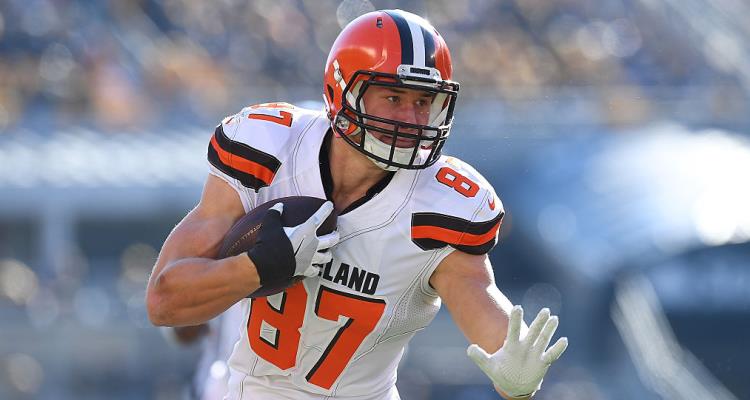 After Cleveland Browns player Seth DeValve, 24, knelt during the national anthem, all eyes have been on him, causing many to become curious about Seth DeValve’s wife. Fans are wondering why he was kneeling, so when it was discovered that his wife was a woman of color, interest in her spiked. Keep reading to learn all about Seth DeValve and Erica Harris’ love story.

Who is Erica Harris?

Born on January 24, 1995, Erica Harris’ age is 22 and she grew up in New Jersey. Her family is also of African-American descent and she has a younger brother named Justin. According to their wedding website, The Knot, Harris met DeValve during her freshman year at Princeton, where he stood up in front of the class and played his guitar for a class project. He first noticed her in the congregation when he was leading worship at the local church nearby the campus. They grew closer as friends through the campus ministry, Princeton Faith & Action and eventually started dating in 2015.

After two years of dating, DeValve popped the question to his best friend in the world, despite his busy football schedule.

“During our conversations about getting engaged, I learned that Erica wanted the proposal to be videotaped and photographed, as well as what kind of ring she always pictured wearing,” DeValve recalled on The Knot. “Being in Cleveland for most of the year during football season, I knew it was going to be difficult to propose to Erica in her hometown, but with our desired wedding time being summer 2017, I knew I needed to find a way to get to NJ before the season was over. I bought the ring in Philadelphia before our opening game against the Eagles, and waited for the opportunity to arrive for me to get back to NJ. That opportunity presented itself after the Brown’s Thursday Night game in Baltimore, following which we were given two consecutive days off. Leading up to this time, I had convinced Erica that Princeton University was waiting for an opening in my schedule to get me back to campus to film a short documentary to be used for recruiting purposes (which was 100% untrue).”

He added: “I told our story up to the present day and then got on one knee and popped the question with the camera rolling. It was a great way to have many memories of such a special day for both of us. Erica was speechless and elated, as was I (as well as being quite relieved that she was actually surprised). We had a big party on campus afterward to celebrate.”

Harris and DeValve were married on Saturday, June 17, 2017, at Trinity Covenant Church in Manchester, Connecticut. The ceremony was followed by a reception at the Aqua Turf Club and they were registered at Sears, Target, and Bed Bath and Beyond.

If you want a more in-depth look at Harris’ life or Erica Harris’ hot pics, then head over to her Instagram (ericadevalve). That’s the best place to find all of the personal photos, from her wedding to her vacations with her new husband! The two are a picture of perfect love!

Many are still protesting why free agent quarterback Colin Kaepernick still hasn’t been drafted and many believe it’s due to the fact that he knelt during the national anthem. Now it seems that DeValve, along with some of his teammates, have gotten down on one knee as well, in their protest against racism.

“We wanted to do something with our platform,” DeValve said to reporters. “It wasn’t a protest of praying, no. It was, we took the opportunity to pray…for our country and for the men and women in this country.”

According to DeadSpin, DeValve said that the U.S. is “the greatest country in the world” and said “The issue is that it doesn’t provide equal opportunity to everybody, and I wanted to support my African-American teammates today who wanted to take a knee. We wanted to draw attention to the fact that there’s things in this country that still need to change.”