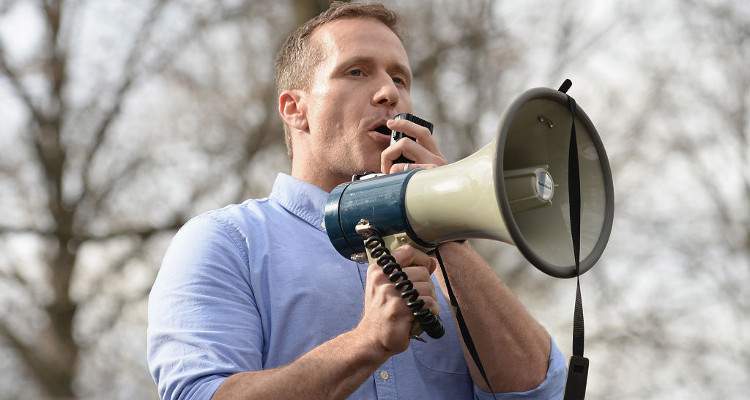 It looks like Missouri Governor Eric Greitens’ reputation has taken a hit after he recently revealed that he cheated on his wife in 2015. The news about the governor’s affair comes out after Eric Greitens’ mistress’ ex-husband spoke to a local TV station. Keep reading to know more about Eric Greitens’ cheating scandal.

Though the name and identity of the alleged mistress and her ex-husband are kept hidden, it is reported that KMOV has recordings that detail how and where the affair began. Following the cheating allegations, the local TV station’s investigation detailed that Greitens took a nude photo of his mistress, which he reportedly kept “as blackmail.”

Thrilled to have the chance to talk about public service, leadership, and my family with Brett of @artofmanliness! Check out the podcast link in my bio.

Greitens admitted to being unfaithful to his wife in 2015. The station’s obtained recordings with his alleged mistress and her ex-husband are said to have been recorded just days after the woman first slept with the current governor. She reportedly did not know that the conversation was being recorded.

In it, she claims to have met Greitens a year before, after cutting his hair, and immediately developed a crush on him. She added that he convinced her to go over to his house after a bit of persuasion.

A portion of her account reads: “He said: ‘I’ll make you feel better. I’ll make you feel good. Come downstairs. I want to show you how to do a proper pull-up.’ And I knew he was being sexual and I still let him. And he used some sort of tape, I don’t what it was, and taped my hands to these rings and then put a blindfold on me.”

She then added that, “He stepped back, I saw a flash through the blindfold and he said: ‘you’re never going to mention my name, otherwise there will be pictures of me everywhere.'” The woman then revealed that Greitens apologized and assured her that he deleted the pictures.

I'm not going to accept excuses from bureaucrats who fail to help people. *** When bureaucrats fail to listen and to take action, we will find out, and we will replace them. *** At the St. Louis Veterans Home, we heard from veterans and their families that they were not receiving proper care. When we heard these complaints, we called for an investigation. When we got the run around from bureaucrats, we hired an independent firm to investigate. *** The independent investigators visited the home nine times over the course of a single month. They conducted 144 interviews with staff, family members, and veterans. They also looked directly at the care veterans were getting. And their investigation revealed serious problems in this home. *** Based on what we've learned, we're taking action. Our full announcement can be seen in the video linked in the bio, but the bottom line is this: Our veterans and their families deserve better. *** We will see this through so that they receive the care and dignity that they have earned.

Wishing everyone a wonderful Christmas!

In the wake of the revelation, Greitens and his wife issued a joint statement which read:

“A few years ago, before Eric was elected Governor, there was a time when he was unfaithful in our marriage. Eric took responsibility, and we dealt with this together honestly and privately. While we never would have wished for this pain in our marriage, or the pain that this has caused others, with God’s mercy Sheena has forgiven and we have emerged stronger. We understand that there will be some people who cannot forgive – but for those who can find it in your heart, Eric asks for your forgiveness, and we are grateful for your love, your compassion, and your prayers.”

Sheena Greitens released her own statement on Wednesday night saying, “We have a loving marriage and an awesome family; anything beyond that is between us and God. I want the media and those who wish to peddle gossip to stay away from me and my children.”