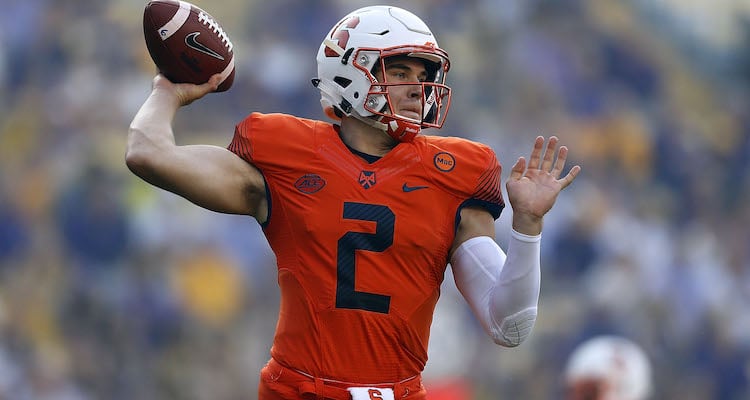 Eric Dungey, a quarterback for the Syracuse Orange, has always been a star on the football field. In Friday’s game, he scored two touchdowns and threw for 278 yards, helping to secure Syracuse’s 27-24 win against the Clemson Tigers. Although still a junior, many see a career in the NFL for this amazing quarterback. Our Eric Dungey wiki has everything you need to know about the player, including details about his high school and father.

In a sad defeat for Clemson, the Tigers narrowly lost to the Orange on Friday (October 13) with a score of 27-24. Unsurprisingly, quarterback Eric Dungey brought Syracuse to a win with an over 260-yard throw and two touchdowns, despite suffering injuries.

Still a junior, Dungey’s already impressive stats improve with each season, leading fans to wonder when the NFL will come calling. And after sustaining multiple injuries early on this season, the quarterback is not one to quit. Dungey now has a compression sleeve on his left arm, with a little extra padding by the elbow he typically falls on.

Eric Dungey, son of Tim and Cindy Dungey, is from one of the wealthiest suburbs in Portland. Because of his background, when he started out at Syracuse, there was a “vibe” felt by other players. Dungey, however, either didn’t see it, or didn’t let it alter people’s opinion of him.

Omari Palmer, right tackle for the Orange, commented, “Football brings us together, but race can still divide us. It was nice to see him bridge that gap.”

Although it took some time to see Dungey in a new light off the field, his teammates were quick to appreciate his determination and skill. And, some of the older players were seeing him more as a “kid brother” than anything else. The quarterback was able to translate his personality off the field, having both his team and classmates see him as relatable.

His leadership abilities shone at Oregon’s Lakeridge High School, Eric Dungey’s high school. After one of his coaches left as a result of a power struggle, the quarterback, who was a junior at the time, started a conversation with his team to discuss their next steps.

Dungey’s care for his players also translated off the field. He once drove out after a teammate “in need” called him close to 3:00 a.m.

Since high school, he’s been a player who “doesn’t want to be known to take the easy road” when it comes to practices and games. And although he’s a quarterback of his team, Dungey is always looking to improve.

During his early years at Syracuse, he went to each of his teammates, asking them for pointers about his game. Even before taking on the “alpha” role, he was known as being “one of the best communicators” both on and off the field.

https://t.co/ejYT6Ycmzi
Here's a great piece on my cousin who's making a impact in his sport, check it out! @EricDungey

There’s no surprise that Eric Dungey’s college football career is on the rise. Earning praise from local outlets in previous years, more and more fans are starting to recognize the star player.

Some have even wondered if Eric Dungey is related to Tony Dungy, former NFL player and coach. Although their last names sound similar, that’s about all they have in common. Other than the fact that Dungy has a son named Eric who played football at both the University of Oregon and South Florida.

Eric Dungey’s father is a healthcare executive who, as far as we know, doesn’t have any connections to football outside of his son. However, the quarterback is related to another athlete, former Motocross racer Ryan Dungey, who constantly supports his cousin on Twitter.