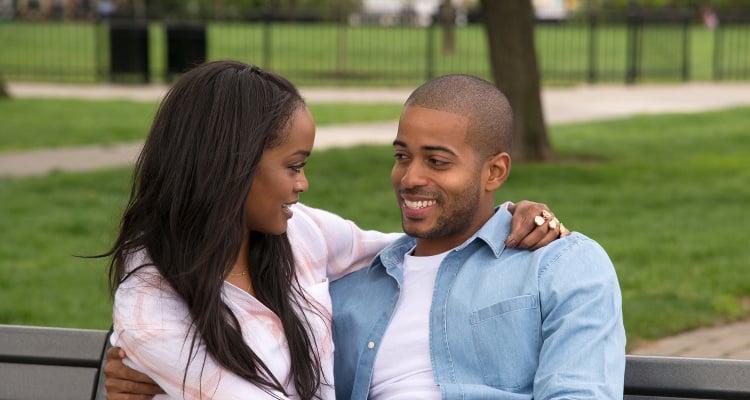 Eric Bigger‘s hometown date will be seen in The Bachelorette 2017 season 13, episode 8. The competition is tight and he is bringing his A-game. In the next episode, we will see Eric’s hometown of Baltimore and see what his family thinks of Rachel Lindsay. Take a look at Eric Bigger’s Instagram feed learn more about what Reality Steve says about Eric’s journey on The Bachelorette.

Eric Bigger’s hometown date with Rachel Lindsay on The Bachelorette 2017 will definitely show the “bigger” side of Eric. We’ll also (hopefully) see whether or not Rachel can see herself in his home and with his family. As of now, Eric’s position on the show is looking good. He’s always stayed true to Rachel, despite some drama he was a part of earlier in the season. Eric is putting everything he has into winning Rachel’s heart, but she is one calling the shots. If you are rooting for Eric, or just want some spoilers, here’s what you need to know about his fate on The Bachelorette season 13, episode 8.

When it comes to The Bachelorette spoilers, the best place to check out is Reality Steve. According to the blogger, Eric will meet Rachel Lindsay’s family in her hometown of Dallas, after he will be one of three guys to fly off to Spain with the beauty (we’re not revealing who the other two guys are just yet!). But, after coming this far, will Eric make it? His fate has been predicted, and Reality Steve says that he will be eliminated before the finale. This is out of the blue for many, but a few people saw it coming. Though the news is not good for fans of the personal trainer, at least there’s a chance that he’s single! In the meantime, check out some pics from Eric Bigger’s Instagram account!

What if Eric’s our dream?

"Dreams Come True" if you believe in the light, then your light will always shine. I'm out to do what's in my heart so my dreams can inspire the world and transform the universe. If you "Have A Dream" go after it!!! You will appreciate every bit of your journey and more. Remember "DREAMS COME TRUE" #dreams #dreambig #life #grateful #energy #light #peace #priceless #prosperity #power #destiny #whatspositive

His aunt’s definitely an inspiration!

#Tbt Just a few nights ago my aunt and I. We spoke life, current events, family, legacy, and I can't forget her recent TED Talk!! From the Trayvon Martin case, to Ferguson and the now the Eric Garner verdict. See what my aunt Verna Myers have to say about black men in America and what she suggests us all to do. Check it out, the link is in my bio. Share and Watch! THANKS! #Throwback #Family #TedX #TedTalks #TrayvonMartin #Ferguson #EricGarner #America #NYC #LA #WorldWide #WhatsPositive #Gratitude #VernaMyers #MovingDiversityForward

✨#POSITIVESUNDAY✨As this is the last day of July and we're moving into a new month. All I can say is time flies, I'm grateful for every moment and life gets better when you stay grounded on your truth and do right by yourself. Everything that was possible in my eyes was possible and everything that l didn't seem possible was possible! So why doubt yourself or what you can become?! The message here is to believe in yourself, trust yourself and never give up or give in. Today and this whole week in general as gave me so much faith about what's next and what can be done. Keep pushing and growing because the challenges won't stop, nor will the work. Hopefully your Sunday was positive and you got the best out of it! Be thankful for right now! ??✔️ Peace & Love #love #light #gratitude #motivation #inspiration #wisdom #success #happiness #positivevibes #positivity #goodenergy #yes #thankyou

Need to restart your fitness goals? What are you waiting for? Redirect your energy to being active and healthy, and watch how much your life will change! All you have to do is take the first step and you're halfway there! #TeamEric #Fitness #Motivated #Inspired #ericbigger

Throwback to when Rachel and Eric first met!

The first night at the mansion was unforgettable, but watch what happens on these first dates as the competition heats up! ?Tune in tonight at 8pm on @abc ! @bacheloretteabc #itsmiracleseason #abc #bacheloretteabc #teameric #ericbigger

Also Read: Jack Stone from “The Bachelorette”: Wiki, Age, Instagram, & Everything You Need to Know

Look at the “Bigger” picture, guys!

Boot Camp with the "Allen Matkins Law Office" was PHENOMENAL!!! Great people and great energy. Together we can do whatever and we did that!! Thank YOU @jillibean20 for putting everything together!! IT'S MIRACLE SEASON!!! ????✨✨✨ Don't forget West Coast people to tune in at 8pm Abc to @bacheloretteabc #bacheloretteabc !!! #LA #Bootcamp #Fitness #Lawyers #Greatness #ItsMiracleSeason #Abc #bacheloretteabc #thebachelorette #ericbigger

Baltimore City we coming home!! @therachlindsay and I are about to create magic in the city. We're both looking forward to Baltimore!! ❤️?It's Miracle Season!!! ✨✨✨✨✨#Baltimore #Maryland #itsmiracleseason #abc #bacheloretteabc #harmony #charmcity #ericbigger