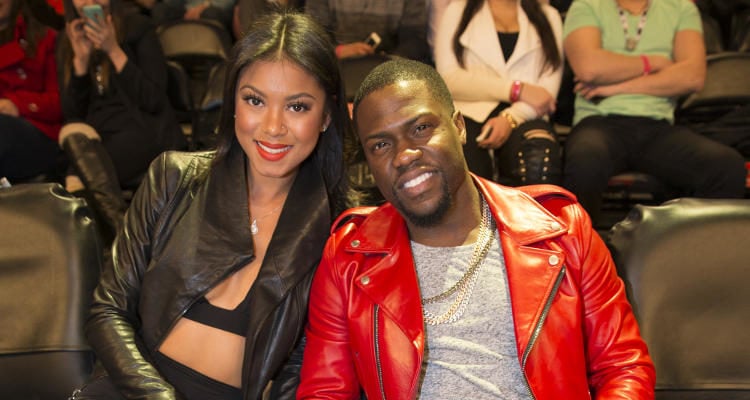 Kevin Hart’s recent Netflix docuseries, Kevin Hart: Don’t F**k This Up, shed light on his marriage to Eniko Parrish. The stand-up comedian and thespian had an eventful 2019, with the Oscars hosting controversy, his horrific car accident, and the release of the blockbuster Jumanji sequel. Kevin Hart’s wife was by his side through it all. But Eniko has gone through her fair share of highs and lows with Hart, as you’ll see in this Eniko Hart wiki.

Eniko Parrish Has a Mixed Heritage

Born on August 18, 1984, Eniko Parrish hails from Baltimore, Maryland, where she was raised. Her father, Kevin Parrish, is a former military vet who has been married to one Sharon Parrish since 2013.

Eniko’s ethnicity is always the subject of speculation, partly because of her exotic looks. Her mother is reportedly from Jamaica, which gives Eniko her Caribbean ancestry.

This photo is my favorite, (my parents) welcoming the love of my life into our family.. I couldn't be any happier seeing just this! I'm smiling from ear to ear. 😁❤️ #nikosdirty30 #livelaughlove

She has often expressed her pride in her roots on social media, where her Jamaican and African-American heritage shows. Her Instagram bio has the Jamaican and Chinese flags, indicating that she has Chinese ancestry, too.

#Repost @__miyag__ with @get_repost ・・・ #fbf The Stock I came from is just so rich & thick & Gorgeous like nannies gravy !#nativeamerican #black #beautiful #elders #matriarch My Nannie Eva H. & Gma Viola P. Circa 1946 Strong 💪🏾 Island. My Gma was 16! 😱 #repost @shandor7 I’m so in love with this picture. RIP Eva Harris❤️ They are just EVERYTHING! ♥️

When Kevin Hart’s marriage to Torrei Hart ended and he married Eniko, he was accused of leaving his wife, a black woman, for an exotic woman. But Hart slammed those accusations against him and his wife in an interview.

“I read so much stuff that black women say, especially about my relationship. ‘Oh, he left his black wife to go be with some exotic chick.’ First of all, my girl is black, she’s Jamaican. But they say it as if they know what me and my ex-wife’s problems were,” he said, further adding that his and Torrei’s marriage broke down because he cheated on her.

Also Read: Who Is Dwayne “The Rock” Johnson’s Wife? Facts To Know About Lauren Hashian

Parrish and Hart Began Dating after His Divorce

Parrish was an aspiring model and actress who relocated from Boston to L.A. to pursue her career. She even walked down the ramp for BET’s 2013 Rip the Runway, a fashion and music show hosted by none other than Kelly Rowland and Boris Kodjoe.

She met the comedic actor Hart in 2009, when he was still married to Torrei Hart. Kevin and Torrei filed for divorce in 2010, and sought joint custody of their two children. Their divorce was finalized in November 2011.

Soon after the divorce, Hart and Parrish went public with their relationship. Although it’s not known when they started dating, it’s rumored that they have been together since 2009.

Hart proposed to her on August 18, 2014, on her 30th birthday, and announced their engagement on Instagram. Two years later, they tied the knot on August 14, 2016, in Santa Barbara. Both of Hart’s older children were part of the wedding party, with his son serving as best man.

I said YES!!!!! To the most amazing man in the world.. 😘💍Thirty has been GREAT to me thus far, I wouldn't trade it for anything..Thanks to my dearest friends, fam, and the LOVE of my life..for making this day a memorable one! You all hold a special place in my heart! xO🎉❤️ #nikosdirty30

Hart and Parrish Have a Son Together

Kevin and Torrei have joint custody of their daughter, Heaven (born 2005), and son, Hendrix (born 2007). On Mother’s Day 2017, Hart revealed he was going to become a father for the third time, with Parrish expecting their first child together.

Their son, Kenzo Kash Hart, was born on November 21, 2017. Hart posted pictures of the jungle-themed baby shower they had before Kenzo’s birth on Snapchat, where he also revealed they had chosen the name Kenzo. (Which the Internet found out means “strong and healthy” in Japanese.)

Hart Cheated on Parrish When She Was Pregnant

Hart admitted to cheating on Torrei, which led to their divorce in 2011. His relationship with Eniko had a turbulent start when Torrei claimed Eniko caused the downfall of their marriage.

“In my divorce, I stood up and said to my ex-wife, ‘Hey, I messed up. This had nothing to do with you. I didn’t understand what marriage was. I cheated. I was wrong. We couldn’t fix it, it got worse. I stepped away because I didn’t want it to get any worse. You’re the mother of my kids, I don’t want to hate you. And the only way that’s gonna happen, is if I’m the bigger man and I leave.’ I think that was a very mature thing to do,” Hart recalled.

And in 2017, Hart apparently had a “bad error in judgment” a second time when reports broke that he was at the center of an extortion and blackmail scandal. A former friend was reportedly blackmailing the Night School star with damning footage of him with another woman.

In September 2017, Hart confessed he cheated on the pregnant Eniko in an Instagram video. He went on to say in the video, “I’m also not going to allow a person to have financial gain off of my mistakes and in this particular situation that was what was attempted,” adding, “I’d rather ’fess up to my mistakes.”

Sending so many apologies to my wife & kids. I gotta do better and I will. I'm not perfect and have never claimed to be …I love you all.

It was later revealed that Hart had been secretly filmed with a model, Montia Sabbag, in Las Vegas. In his Netflix documentary, he said his extortionist demanded $10.0 million for the explicit video.

Though it is the second time Kevin Hart has cheated on a wife, Eniko chose to give him another chance. In the same documentary, Eniko explained what she was going through at that time.

“How I found out was a DM. I don’t know who it was,” she said in the third episode of the series, titled “What Happened In Vegas.” “They sent me an edited video of Kevin and, you know, another woman.”

She went on to recall her immediate reaction then. “I called him, I’m crying, I’m like pissed. Right then and there, I just kept saying, ‘How the f––- did you let that happen?’”

At that time, the pregnant Eniko tried to maintain “a level head” for the sake of her unborn baby. “I think that’s the only thing that really got me through. I wasn’t ready at the time to just give up on my family,” she said. “I wanted Kenzo to be able to know his dad and grow up.”

Eniko and Kevin put on a united front after that scandal, and in the documentary, she says going through the ordeal was for the better. “We passed it and he’s a better man now because of it.”

But while she was generous enough to give him a second chance, it’s not without a warning. “Three strikes you’re out, you’re out of here,” Parrish added. “So, as long as he behaves, we’re good.”