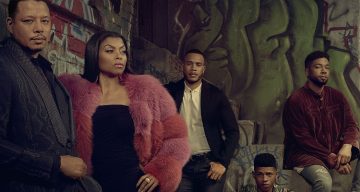 Viewers are eagerly awaiting the Empire season 3 premiere which will air tonight on Wednesday, September 21, 2016. After the exciting events of season 2, people can’t wait to see what their favorite characters are going to do, especially since season 2 ended with a cliff-hanger of an episode! The Empire season 3 cast comprises of some of the same actors who appeared earlier and also some new exciting stars. The Empire cast is made up of some big names and some lesser known actors. However, the one thing they all have in common is that they are all very passionate and talented.

Terrence Howard and Taraji P. Henson reprise their roles as Lucious Lyon and Cookie Lyon. Howard first came to notice for his small but impressive performances in the films Dead Presidents and Dr. Holland’s Opus. He was nominated for an Academy award for his performance in Hustle & Flow. He has proved his talent in a variety of movies like Winnie, Ray, Crash, Four Brothers, The Brave One and Prisoners. He is one of the main characters in Empire and has an impressive fan following.

Taraji P. Henson is an American actress and singer who got her breakthrough role in the film, Baby Boy. She acted in serious films like Hustle & Flow and The Curious Case of Benjamin Button. She has also acted in films such as Date Night, The Karate Kid (remake) and Think Like a Man. She has also acted in some TV series like Boston Legal and Eli Stone. Bryshere Gray plays Hakeem Lyon in the series of Empire season 3. Gray is an actor and a rapper. Gray has also performed as a rapper in several music festivals in the Philadelphia area.

Jussie Smollett is an actor, singer and photographer who plays the role of Jamal Lyon. He has acted in movies such as The Mighty Ducks and North, and will soon be releasing his new music album. Trai Byers plays the role of Andre Lyon. Byers is himself an actor and singer, who has also acted in films such as Jayhawkers and Selma. Kaitlin Doubleday stars as Rhonda Lyon and has done a lot of work in the last few years on TV. She has acted in TV series such as Cavemen, CSI:Miami, Brothers & Sisters, Bones, The Closer and Criminal Minds.

Rapper, Xzibit plays the role of Shyne Johnson in Empire. He became famous as the host of the MTV series, Pimp My Ride. He has worked with many high profile musicians such as Eminem, Cypress Hill, Snoop Dogg, Ice Cube, Timbaland and Alice Cooper.

There are some notable guest stars set to appear in season 3 of Empire. Mariah Carey is playing the role of Kitty, while hip-hop singer, French Montana plays a music mogul named Vaughn. The American rapper and record producer, Birdman plays himself in Empire. He owns his self-founded label called “Cash Money Records.” His coming on the show will add great authenticity to the proceedings. Actress, Phylicia Rashad will appear as the role of Diana Dubois, mother of Vaughn. She has acted in outstanding Broadway productions such as, A Raisin in the Sun, Into the Woods, Gem of the Ocean and Cat on a Hot Tin Roof.

The best thing about the cast of Empire is that they are themselves singers/performers, as well as actors. This makes their performances very genuine and realistic. It adds a lot of originality and authenticity to the show, which is why Empire has succeeded in getting viewers to tune in week after week. The cast is young and very passionate about their craft. So, if you want to lose yourself in the world of Empire (where you are equally likely to hear hip-hop music and experience the drama/violence that sometimes comes with it) just tune in to Fox at 9 pm EST on Wednesday, September 21, 2016.