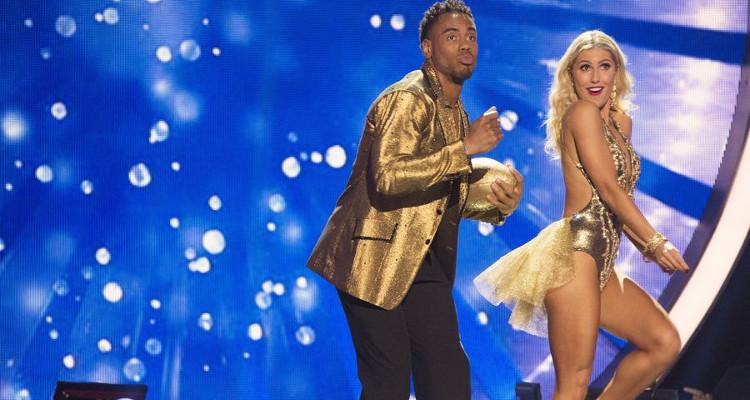 She may not have won a Mirrorball Trophy yet, but things are looking up for Dancing with the Stars pro, Emma Slater. She’s partnered with NFL’s Rashad Jennings, who is just as determined to win as she is.

Emma Slater is ready to turn her DWTS losses into a victory with New York Giants,’ Rashad Jennings. The NFL pro is the athlete to watch from this season’s Dancing with the Stars cast. He’s already shown his moves with Slater on the season 24 premiere, and he’s pretty good! Looks like Slater might finally win that coveted Mirrorball Trophy. There’s a lot more to this dance champ you need to know, so we’re sharing facts about the vibrant dancing pro in Emma Slater’s wiki.

Introduced to Dancing at a Young Age

Emma Louise Slater was born in Sutton Coldfield, England on December 25, 1988. So, it was definitely a merry Christmas in the Slater house! She was raised in Tamworth, Staffordshire, where she got her dancing shoes on. Slater attended local stage schools and participated in several school productions. At the age of 10, she began formal training in Latin ballroom dance.

In the early years of competing, she won several dance titles. Most notably, she won the British Under 21 Latin American Championships at the Blackpool Closed 2005 when she was 16. She won the 2006 United Kingdom Under 21 Latin American Championships at the Bournemouth Pavilions, England. She was ranked in the top 10 ballroom dancers in the world and represented U.K. in competitions worldwide.

Her Career Began with George Michael

When she was 15, she appeared in the music video for “Round Here” by the late George Michael. Incidentally, Michael passed away on Slater’s birthday and she was devastated by his untimely death. What started as a string of sweet birthday tweets ended with her tweeting her sadness about her idol’s passing.

Omg George Michael 💔 I'm truly devastated. I grew up with him like so many of us did. All my love goes to his family at this time 😢 #Legend

After working with George Michael, she filmed a fitness video called Latinasize that same year. She was 16 when she broke into theater with the live show, Simply Ballroom that toured the U.K., U.A.E., and South Africa. While on tour, she appeared on the South African version of DWTS. After the tour, she did more theater performances like Dirty Dancing, where she was the principal dancer, as well as shows like Cheek to Cheek and Latin Fever. In 2009, she joined her fellow DWTS pros on the live dance tour, Burn the Floor.

Slater also had a small acting stint, where her dancing and singing skills came to good use. It was the big screen adaptation of the super-popular ABBA musical, Mamma Mia! starring Meryl Streep, Pierce Brosnan, Amanda Seyfried, and Colin Firth. She played a minor role and danced in one of the numbers. Her career as a choreographer started with setting the DWTS routines and choreographing Usher at the Billboard Music Awards.

All that dancing and DWTS performances have added to her wealth, and Emma Slater has earned a net worth of $300,000 in her career.

Also Read: Rashad Jennings and Emma Slater on “Dancing with the Stars” 2017: 3 Facts to Know

Making a Name with DWTS

Slater may have been a world dance champion from the UK, but she became a household name in America with Dancing with the Stars. She joined the cast in season 14 first as a troupe dancer, and choreographed the opening and finale dance numbers. After three seasons as a troupe member, she was finally promoted to the cast as a pro in season 17 with celebrated comedian, Bill Engvall and they made it to the top 4.

She had to withdraw from season 18 when her partner, Billy Dee Williams suffered a back injury. She was partnered with LMFAO singer Redfoo in season 20, but they were the first couple to be eliminated. After sitting out season 22 and losing once again in season 23, she’s back again in season 24. And she couldn’t be more happier being partnered with an NFL-er. After all, the athletes have a history of winning the competition!

Things are also looking good because Rashad Jennings is neck-and-neck with another favorite athlete, Simone Biles, who is partnered with Slater’s fiance, Sasha Farber. DWTS producers sure know how to pair the stars and pros!

Finding Love in the Ballroom

Since ballroom is her life, there’s no surprise that she found love there, too. The 28-year-old began dating her fellow DWTS pro, Sasha Farber in 2011 and they were going strong until 2014. She posted on Instagram that they had broken up and opened up about the split to Glamour saying, “You know, it goes through moments, but I think the world of Sasha. I really do. I wouldn’t have been so close to him for three years of my life. He’s just the best person. I don’t think we’re supposed to finish together. I think there are other people that might make us both individually happy, but I’m always going to be his best friend.”

@sashafarber1 may or may not kill me for posting this picture. But I just had to. Sash, we created many many beautiful memories, all of them I'm grateful for. I'll cherish the journey we traveled together and will always have deep respect for you. Even though life has now taken us in separate directions, and we will no longer head for the same future we once visioned, I'm so grateful I've had this time with you. I believe my life was enriched through knowing you so well. I only wish you the absolute best you can ever wish another person.

It appeared to be an amicable split, and they even continued to live together as roommates and friends. They also worked well on the DWTS live tour right after their breakup. But it looks like the pull was always there. They rekindled their relationship and, as we know, the rest is history.

Last season, while filming DWTS, Farber got down on his knees and popped the question to Slater. Marriage was definitely in the cards for them, and Slater was the one who picked the engagement ring. But what she didn’t expect was the surprise proposal on live television! Wedding plans are currently on the back-burner, since the pros are busy with DWTS season 24.

It will be all about the fiancé showdowns this season, as Slater will put her man above the competition and Jennings is all for it. But that doesn’t mean that they are going to go easy on each other!

#TeamShadSquad, otherwise known as Rashad Jennings and Emma Slater, will take over the ballroom on Mondays when Dancing with the Stars season 24 airs at 8:00 p.m. EST only on ABC.