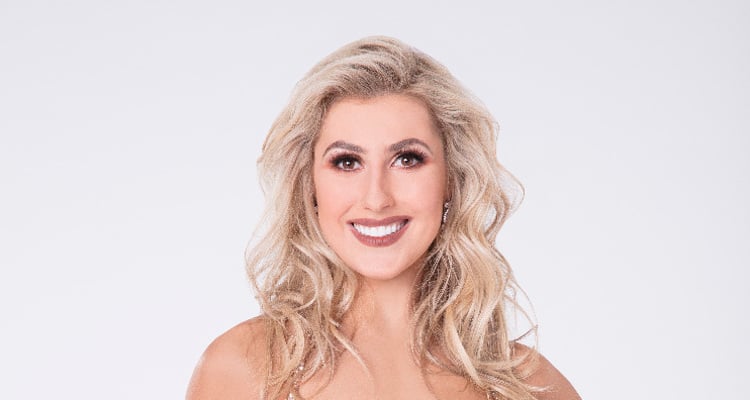 Since the sweetest proposal on Dancing with the Stars, the world cannot get enough of pro dancer, Emma Slater. The gorgeous dancer has killer moves and a body that will make anybody green with envy.

Emma started off on Dancing with the Stars as a troupe dancer. In the 14th season, she danced and choreographed all the opening and the finale dance numbers. After being a troupe member for three seasons, she was promoted to a professional dancer on the 17th season of Dancing with the Stars. Since then, she has been a regular part of the show, except for season 22.

For season 24 of Dancing with the Stars, Emma is paired up with NFL running back, Rashad Jennings. Although, she has not won the Mirrorball Trophy yet, it looks like this time she may have a real shot, especially since earning the second highest score in the first episode. To make things more interesting, Emma’s fiancé, Sasha Farber is competing against her with his gymnast partner, Simone Biles.

Emma Slater’s Instagram account is a testament to her skill as a professional dancer, who just happens to look like a stunning model, as well. Take a look at these hot pics from her Instagram and, while you’re at it, find out more about Emma Slater below!

Who is Emma Slater?

Emma Louise Slater was born on December 25, 1988, in Sutton Coldfield, England, but was raised in Tamworth, Staffordshire. Since she was young, Emma loved to dance. She went to local stage schools and participated in several productions, winning herself several dance competitions in England. At the age of 10, Emma started training in ballroom and Latin dancing.

Besides dancing, Emma has also appeared in several music videos and had a small role in the film, Mamma Mia. When she was 15, Emma was featured in George Michael’s music video, “Round Here.” That same year, she appeared in the fitness video, Latinasize. In 2005, she won the British Under 21 Latin American Championships. The next year, she won the 2006 United Kingdom Under 21 Latin American Championships. Emma Slater has also been a part of many world tours and videos like Simply Ballroom, Dirty Dancing, Cheek to Cheek, Cuban Groove, and Latin Fever.

Emma and Sasha started dating in 2011 and broke up for a bit in 2014. It was confirmed in December 2015 that the couple was very much back together, thanks to an Instagram post from Sasha! Last season on Dancing with the Stars, Sasha proposed to his long-term girlfriend during the show’s broadcast. After they took the stage and danced to Bruno Mars’ “Just the Way You Are,” Sasha got down on one knee in front of everyone, and proposed to Emma. Isn’t this the sweetest thing ever? The couple had planned to waltz down the aisle this coming fall, but have decided to postpone the date as they are both too busy with DWTS to plan a wedding right now!

When she’s not working hard to win the competition, Emma regularly updates fans with hot pics of what she’s up to. Take a look at some of Emma’s hottest pics and see for yourself how sexy and stunning the dancer really is!

Giving us all the Flashdance feels!

Dance is life! You guys know I can't afford to miss a day dancing so when I'm sick I always grab my trusty #Theraflu to get me back on the dance floor! Tell me, #whatpowersyou? Use as directed #sponsored

Spicing things up on the ballroom floor!

If I was a Spice Girl (and I've thought about this) I'd be '5 spice' because I like variety and have about 5 different personality types. And I love Asian food. What #SpiceGirl would you be and why? #Saturdaythought #Girlpower

Showing off her toned legs.

The 2017 So Danca Campaign, “The Wonder of Dance” has officially launched!!! I absolutely loved the theme behind this campaign. All these photos and videos are so innovative, capturing the dancers and adding the element of levitation. All down to the great minds and the stunning dancewear of @sodancausa. If you want to see more of their visionary 'Wonder of Dance', go to their YouTube page, it updates regularly, link in my bio! #SoDanca #Ambassador #Wonderofdance

I know what you're thinking. What's she cooking. But that's not important. What IS important is my @sodancausa leotard is made to fit the curves of my body so I can levitate in comfort. It's casserole. #Sodancafashion

Even posing comes naturally to her!

Absolutely adored our photoshoot with @CambriaQuartz Magazine, just caught a peek at the whole feature, LOVE IT! It comes out Monday so be sure to grab one for more pics of @sashafarber1 & I at home #CambriaQuartz #cambriamagazine ? by @georgeholzofficial

Proud to say I'm now a Dance Ambassador for @sodancausa! Proud to join their incredible line up of So Dancers and can't wait for the festivities to start! ????

If things on DWTS don’t work out, she could certainly give America’s Next Top Model a try!

So happy to be on the cover of @sociallifemagazine for their June issue!! Yay! Such a great team behind this shoot, thank you to all of you 🙂

First fitting with @kellydslater for my new latin dress, she's the most phenomenal seamstress ever!!! So proud of her talent, this dress is going to be truly amazing, thanks Kel! (Sorry I'm standing a bit awkward here in my dining room but I wanted to show her work in progress!) #Twinperks ✂️

Ahoy Captain! You definitely don’t need binoculars to see how hot Emma is.

Making beach days with her pup look even more enjoyable!

End of a good beach day with @kellydslater & @rubythecreature despite the absence of Dolphins ?