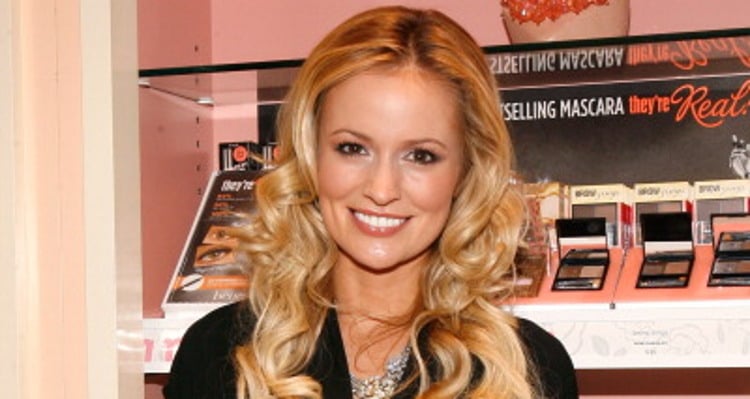 Emily Maynard was spotted with a baby bump, and her fourth pregnancy was confirmed by her husband, Tyler Johnson. He showed his cute family off in a video of Emily and their son, Jennings Tyler enjoying ice cream. Emily Maynard is pregnant with baby number four and fans are going wild! Here’s everything you need to know about her in our Emily Maynard wiki.

In an interview with People, Emily Maynard said about her pregnancy, “We’re going to plan this one a little better. We’ll space it out a little bit better, this has been the hardest thing I’ve ever done.” She is expecting her third child with Tyler Johnson, but this will be her fourth child, as her daughter Ricki was born to Maynard and her late fiancé, Ricky Hendrick. Emily Maynard was on The Bachelor season 15 and then subsequently moved on to be The Bachelorette in season 8. She was engaged to three men before settling down with her current husband, Tyler Johnson. Find out everything you need to know about Emily Maynard right here.

Emily Maynard was born on February 1, 1986, in West Virginia. She is an event planner by profession but rose to fame after appearing in The Bachelor franchise. In season 15, she contested for Brad Womack’s hand (along with 25 other women) and won. Though they got engaged at the season finale, they separated after only two months.

On the show, we found out that she has daughter from a previous relationship with NASCAR racer, Joseph Riddick Hendrick. She was 16 years old and he was 21 when they met, but Maynard told him she was 19. They began dating a year or so later but unfortunately in 2004, Hendrick died in a plane crash that killed seven of his family members and friends. The plane was on its way to Martinsville Speedway, when it crashed on Bull Mountain. Maynard, who was 18 at the time, found out she was pregnant with his child after she heard of the crash. She gave birth to Josephine ‘Ricki’ Hendrick on June 29, 2005, and named her daughter after her late father.

Much needed girls night at the mall. No boys allowed.

Emily Maynard on The Bachelor

Emily Maynard returned to The Bachelor franchise as she was chosen to be The Bachelorette for season 8 of the show. On the show, she gave her final rose to Jef Holm and the two were quickly engaged. But history repeated itself when her engagement with Holm ended later that year.

Who’s the bachelorette with me? I could have been her #bachelor, but the #bachelorette show decided it was too late for me to be added…after all the interviews and blood work. Come on….lol #hidesite20/20 #emilymaynard #thebachelorette #throwbackthursday #singleladies #isntthatspecial #southerngirl #njboy #northcarolina #newjersey #findtruelove #fling

After going through many failed relationships, Maynard finally found love at church of all places! She met Tyler Johnson while she was with a friend, but after meeting him, she said he could not have cared less about who she was. “I met him at church before I did The Bachelorette, he really wanted nothing to do with me,” she explained, adding, “I told my girlfriend I met this guy and he could like not be less attracted to me, he was in the friends zone.”

How BEAUTIFUL was @emilygmaynard wedding? One of my favourite weddings by far! http://emilymaynard.com/blog/im-back-as-a-married-woman/. – S.

She married Tyler Johnson in 2014 with Ricki by her side. Tyler proposed to her at home, and gave her daughter a ring, as well! Isn’t that just too perfect? The Maynard-Johnson wedding was shared all over social media by her fans, making it a trending topic in 2014. The incredible journey inspired Maynard to put it all down on paper and in 2016, her book, I Said Yes: My Story of Heartbreak, Redemption and True Love was released.

I’ve had a girl crush on @emilygmaynard for years now, so I was excited to read her book! It was a sweet, quick read with some interesting @bachelorabc / @bacheloretteabc insight for #BachelorNation fans ????

What is Emily Maynard Doing Now?

Emily Maynard’s husband is very private, making details about his personal life a little hard to find. But with three children and a fourth one on the way, we’re sure he must be doing very well financially! Maynard seems to have found her prince charming in Tyler, and she is all praises for him. She can’t stop gushing about how amazing a dad he is, and how his parental instincts helped her get through a lot during her pregnancies. The couple’s first child, Jennings Johnson was born in 2015, and their second son, Gibson Johnson was born just 14 months later. Emily Maynard’s kids love their father and she even joked that her Ricki likes Tyler better than her! The former Bachelorette is all set for the arrival of their newest baby, and we couldn’t be happier for the family.

With all this fame, the reality star has achieved a lot in her career and looks happy with her growing family! Emily Maynard began her journey for love on The Bachelor, moved on to get a second shot on The Bachelorette, and ended up finally finding the man of her dreams by chance! Emily Maynard’s net worth is estimated to be a sweet $5.0 million and growing. She is well-prepared for the arrival of her fourth baby, and we wish her and her family all the luck in their life ahead!