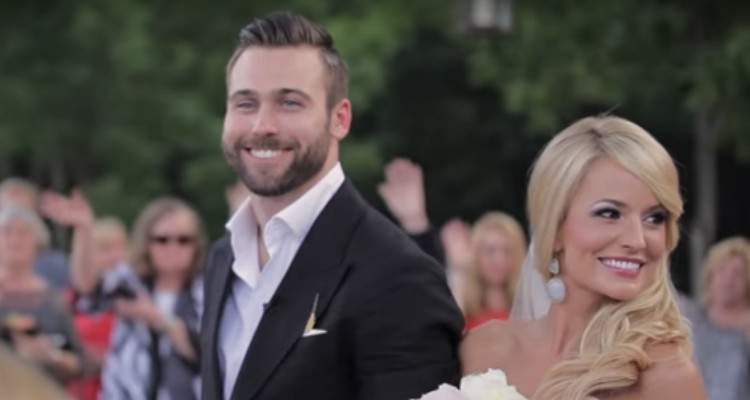 Tyler Johnson is thrilled at the opportunity to be a father again and is sharing his joy. This is his third baby, and both he and his wife, former reality TV star Emily Maynard, are working hard to provide a warm and safe home for their kids. Johnson, a man with a big heart, is also a doting father to 12-year-old Ricki, Maynard’s daughter from a previous relationship. Johnson works at a car dealership in Charlotte, North Carolina. Keep reading to know information about Emily Maynard’s husband in Tyler Johnson’s wiki.

Reality TV star Emily Maynard’s husband, Tyler Johnson, is on cloud nine, as he recently became a father again with the birth of his baby boy, Gatlin Avery Johnson, on November 12, 2017.

Johnson revealed the happy news through Instagram, and posted a video of Maynard cradling their newborn in a hospital bed with the caption, “#4 here!” He also shared a photo of Gatlin meeting Ricki, Maynard’s 12-year-old daughter from a previous relationship.

The couple have two other sons, Jennings Tyler and Gibson Kyle, aged two and 11 months, respectively.

While Maynard is famous for appearing in reality shows like The Bachelor and The Bachelorette, little is known about her husband. But, we did find some interesting facts about him and what he’s all about.

Who Is Tyler Johnson?

While Tyler Johnson’s age is not known, we do know that he works as a general manager at the Mercedes-Benz dealership of Hendrick Automotive Group in Charlotte, North Carolina. He joined the team in 2013 but worked in the automobile industry since at least 2008.

Johnson also has a degree in business management from Wingate University.

The man has a big heart. He accepted Maynard’s daughter with deceased NASCAR racer Ricky Hendrick, who died in a plane crash, as his own.

Johnson and Maynard dated for a year before getting engaged. However, it was no whirlwind affair!

The pair met at church and knew each other for several years before going out. They had a surprise wedding in 2014 and had three children since.

When proposing to Maynard, Johnson kept Ricki in the loop, as Maynard told US Weekly, “He proposed to me at home and gave both Ricki and me rings. It was so sweet!”

Maynard posted a picture of them together with the caption, “Who knew me and the hot guy from church would be installing car seats together one day?”

Johnson is a very family-oriented guy, and Maynard says that Ricki loves him more than she loves her own mother.

Right now, Tyler Johnson and Emily Maynard have their hands full with three babies and a 12-year-old to take care of. However, Johnson has a strong sense of responsibility and is ready for any obstacle that comes in his way. They don’t make men better than Tyler Johnson!