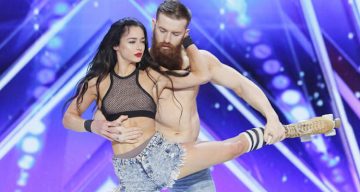 Another Tuesday, another night of jaw-dropping talent. Emily England and her brother debuted their first performance on America’s Got Talent and left everyone in awe of their death-defying act.

Emily England is not your average roller skater. Together with her brother, Billy England, she left Europe in awe of her talent that defies both gravity and death. The duo hit the America’s Got Talent stage last night and their performance left Simon Cowell with that smug, “I told you they were good” grin on his face. Their riveting stunts made them the talk of the night —especially the hot Emily England! If you can’t get enough of her, check out our Emily England wiki right here.

Carrying on the Family Business

Emily England was born Carmen Emilia Arata in Birmingham, England. She was born in 1989, and the age of 27, she makes her death-defying roller-skating routine look easy. Her brother, Billy, was born Victor Arata and he’s three years older than her.

The siblings are seventh generation circus performers! So, amazing their audiences with unbelievable acts runs in the family. Their father was a wire-walker, who died of skin cancer. He retired from performing and started an agency for circus performers. Her mother had Emily training 10 hours a day for her performance career when she was four years old and, by the age of six, she went professional.

Also Read: Colin Cloud Wiki: Everything You Need to Know about the Real Life Sherlock Holmes on “AGT” 2017

Billy and Emily’s elder brother, Vittorio, performs with his wife in Vegas. The younger siblings are estranged from him saying, “We don’t find him very supportive. That’s why we changed our stage names.”

Contributing to the Household

After their father passed away, Billy and Emily had to take care of the agency. Their mother was under a lot of stress, which made the kids want to help her even more. So, they began doing street acts at the Edinburgh Festival to earn some money. Instead of going home, they would stay at the homes of people their mother had trained.

As one half of the roller-skating duo with Billy, Emily England has become a renowned face in Europe and has even performed for Prince Charles and Princess Anne! She can even prove how dangerous her work is as she suffered from a broken knee, shoulder, wrist, fingers, and several ribs. (“Ouch” doesn’t cut it!) They have also performed in several venues in Las Vegas.

She’s Been on Many Shows

America’s Got Talent isn’t Emily and Billy England’s first shot at a reality TV competition. The contortionist has been on the Big Brother spin-off, Big Brother: Celebrity Hijack. She placed second in the competition.

Later, she and Billy went on to perform in Britain’s Got Talent 2015, and made it to the semi-finals before getting eliminated. Last night, Simon Cowell told the other judges that he’s familiar with their act, being a judge on BGT.

Her Relatives Died Working in the Circus

Emily’s family have had several brushes with death from their dangerous acts. In BGT, she mentioned that they have to practice extensively because missing the mark can cost them their lives. The siblings know this first-hand, having lost an uncle and an aunt doing daredevil stunts.

Their aunt, and Emily’s godmother, was the world-renowned aerial silk star, Eva Garcia. She died at the age of 38 when she plunged 30 feet to her death during a performance. Less than three years later, the family underwent another tragedy when her uncle, 47-year-old Gilles Gonnerton passed away. He used a leather neck strap that had been passed down their family for generations. But the trapeze broke during his Big Top show and he fell 20 feet to his death.

To minimize accidents, Emily and Billy never cut back on practice, but it doesn’t stop them from doing high-risk acts either. ““We don’t like talking about what could happen if we mis-judge a move by a millimetre. But, as generations have done before us, we understand we have to practice until we drop because our lives depend on it. Literally,” said Emily.