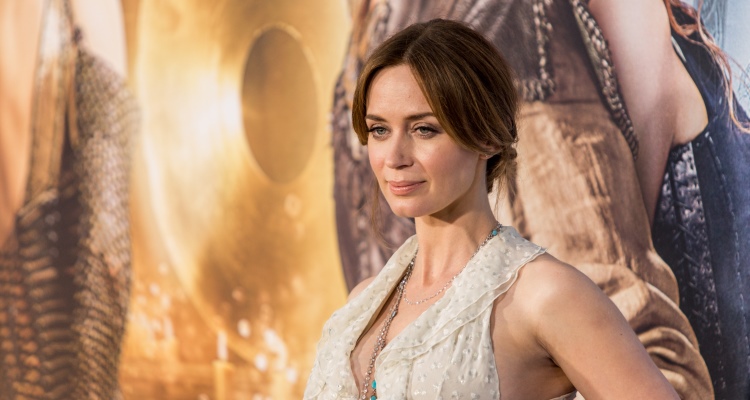 Actress, Emily Blunt has been very busy promoting her new film (based on the best-selling book of the same name) The Girl on the Train, and she has recently taken the time to discuss the issue of “gender double standards.” Fans who are looking to get more information on the 33-year-old actress have been searching online for Emily Blunt’s net worth and Emily Blunt’s husband and are even asking “How old is Emily Blunt?”. Luckily for you, all your questions will be answered in our Emily Blunt wiki.

Emily Olivia Leah Blunt was born on February 23, 1983 in Roehampton, London, England. Emily is the second of four children and is the daughter of Joanna Mackie, a former teacher and actress and Oliver Blunt, a lawyer. Her siblings are Felicity, Sebastian and Susannah. At a young age, Blunt struggled with stuttering and used acting as a way to overcome the issue. And by the looks of her lengthy resume, it worked!

Blunt attended Ibstock Place School in Roehampton, and at the age of 16, she went to Hurtwood House, a private college known for its performing arts program. While she was there, she was discovered by an agent and began working towards her professional acting career.

In 2008, Blunt started dating The Office alum, John Krasinski and they hit it off instantly. Krasinski, 36, was immediately in love with her and was nervous to even meet her at first! According to Us Weekly, Krasinski admitted that he saw The Devil Wears Prada more than 50 times before talking to Blunt. When he met her, he instantly assumed he would mess it all up and it would never work out. So, for their first date, Krasinski brought Blunt to the gun range and as luck would have it, they’re still together today! They were quickly engaged in 2009 and got married in Como, Italy in 2010. Two years ago, they started their family when Blunt gave birth to daughter, Hazel Krasinski, followed by 12-week-old daughter, Violet. Blunt and her family currently live in a New York City town house. As of 2015, Blunt obtained dual citizenship and is now an English-American.

Fun fact: Emily’s co-star in The Devil Wears Prada, Stanley Tucci, is actually her brother-in-law! She introduced Tucci to her sister, Felicity, who is a literary agent. The couple were married in 2012.

Blunt’s net worth is $16.0 million and she has achieved her wealth and A-list status by taking on complex and diverse roles. Whether it’s films such as The Devil Wears Prada, The Edge of Tomorrow or Sicario, Blunt continues to bring her talent and passion to every project she takes on. Blunt is now set to play a darker role in the critically acclaimed film, The Girl on the Train. According to Deadline, it’s the most challenging role she has ever done and she was attracted to the damaged protagonist.

In a recent Hollywood Reporter interview, Blunt said that she hates the double standards that women face and enjoyed playing a more damaged and complex role.

The Girl on the Train will be released in theaters on October 7.  Check out the thrilling trailer below!