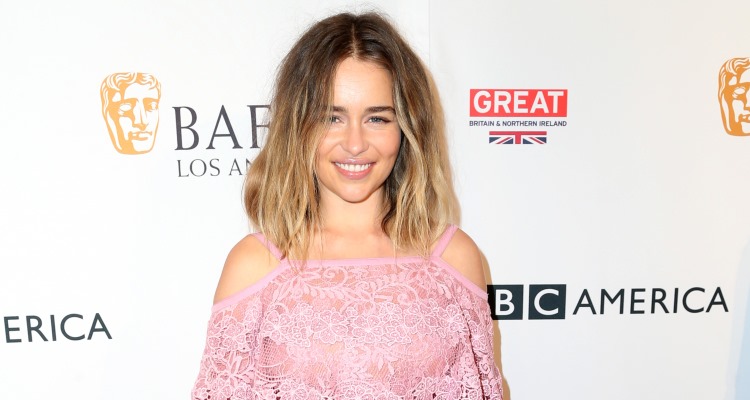 Game of Thrones actress, Emilia Clarke shared a fun moment from her holiday on Instagram (@emilia_clarke). Emilia Clarke’s Instagram photo received almost 170,000 likes in just one hour, and her fans posted hundreds of comments complimenting her outfit and wishing her a happy holiday!

The star wore slim-fit blue jeans, black heel boots, and a varsity jacket with a black vest and amber sleeves. Standing outside what appeared to be a beachside chalet, she threw an orange in the air and prepared to catch it with a smile on her face. Check out Emilia Clarke’s pics on Instagram for more of her adventures this holiday season!

Ahead of the highly anticipated Game of Thrones season 7, the cast members have been sharing fun moments on set and out with each other, as well as preparing for the suspenseful season 7 premiere! Unlike most HBO shows (which debut in the spring), Game of Thrones is expected to launch in the summer months. Showrunners, David Benioff and Dan Weiss confirmed, “We’re starting a bit later because at the end of this season, ‘Winter is here’ – and that means that sunny weather doesn’t really serve our purposes anymore.” DigitalSpy.com reported that the filming of season 7 won’t end until February 2017, which means die hard fans will have to be patient to see the return of Jon Snow (Kit Harington), Cersei (Lena Headey), Tyrion (Peter Dinklage), Daenerys (Emilia Clarke), Jaime (Nikolaj Coster-Waldau), and more. Actress, Sophie Turner (Sansa Stark) hinted that not every cast member will make it to the end!

So this is what time off feels like?! #suspendedmomentsintimeleavesyoufeelingmightyfine ?????

You’ll definitely want to follow the cast on Instagram, or stay on top of the Game of Thrones updates—rumors have been circulating that Khal Drogo (Jason Momoa) could be back, especially after he shared on Instagram the following post:

There are so many exciting things head of GOT—stay up to date with our stories to find out more!