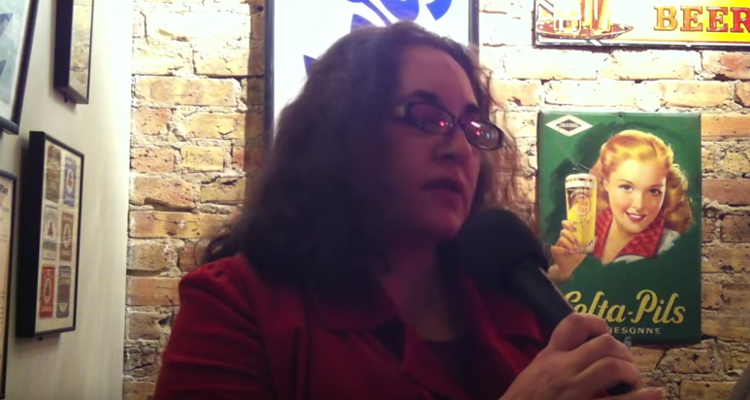 At the age of 40, Emil Ferris reached the point in her life where most people would slow down. However, Ferris is made of stronger stuff. She fought paralysis and pain to write her first graphic novel, My Favorite Thing is Monsters, which was released in February 2017 and has now become a bestseller.

Emil Ferris’ life almost ended at 40. She was bitten by a mosquito and she contracted the West Nile virus. Ferris is an artist and spoke about contracting the virus saying, “I woke up in a hospital room three weeks after being admitted. I was paralyzed from the waist down. I couldn’t speak. And I’d lost the use of my right hand, so I couldn’t draw.” At the time, Ferris was a single mother to a 6-year-old daughter, stuck in a wheelchair and had to make ends meet. She didn’t give in. Instead, she taught herself to draw again, received an M.F.A in creative writing from the School of Art Institute of Chicago, and wrote her debut graphic novel, My Favorite Thing is Monsters. People want to know more about this courageous and talented woman, so we have details from Emil Ferris’ wiki.

Death of a Mysteriously Beautiful Woman

Emil Ferris’s début graphic novel, “My Favorite Thing Is Monsters,” follows a ten-year-old girl named Karen Reyes in Chicago in the nineteen-sixties. It takes the form of Karen’s diary, in which she chronicles her attempts to solve the mysterious death of her neighbor. On the eve of the publication of a work about the past, Ferris is surprised by its relevance to the present: “When I started on this—years and years ago—we were living in a different time,” she said. Click the link in our bio to read more.

Ferris started exercising her hand and plunged head-first into writing and drawing her first graphic novel. It was tough, but she did not give up. “The virus both impelled and scared me at the same time. I honed my focus and determination, and the book saw me through,” she said. Emil Ferris’ My Favorite Thing is Monsters is a sweeping 1960s murder mystery, set in her home city of Chicago. It’s composed of her ballpoint pen drawings on wide-ruled notebook paper and tells the story of a 10-year old named Karen Reyes, who thinks of herself as a wolf-girl. Emil Ferris’ graphic novel takes the form of a sketchbook diary as Karen tries to solve the murder of her stunning but mysterious upstairs neighbor, Anka Silverberg.

Art Runs in the Family

Ferris worked as a freelance illustrator and toy designer before devoting herself to her first graphic novel. Her work includes creating the models for the Mulan line of Happy Meal toys for McDonald’s, and the Tea Bunnies line of dolls for the Japanese toy maker, Tomy. Even though she could comfortably pay the bills, Emil Ferris yearned for something more. Her parents had been artists and she was influenced by her father who taught her “stealth drawing,” which allowed her to replicate small details in her drawings.

First, Emil Ferris was paralyzed. Then her book, “My Favorite Thing Is Monsters,” got lost at sea. Set in turbulent, late 1960s Chicago, the blood-tingling graphic novel braids vintage monster imagery with the preternatural curiosity of a 10-year-old who fancies herself a wolf girl. Her book was originally scheduled to come out in October. But the cargo ship carrying the 10,000-book print run from South Korea to the United States was seized at the Panama Canal because the vessel’s owner was deep in debt. This snafu at sea happened years after Emil contracted West Nile virus. She woke up paralyzed from the waist down. “I’d lost the use of my right hand, so I couldn’t draw,” she said. And yet she taught herself to draw again, and later got an MFA in creative writing. Emil has spent her life as an artist, but she has also waited tables. “As we speak,” she said, “I have $14 and a bag of pecans.” But her inner life has always been rich because of her love for art. “It’s a delicious thing, to think about the artists you love,” Emil said. “I tend to taste chocolate.” @whittensabbatini took this portrait of the artist Emil Ferris while on #nytassignment.

My Favorite Thing is Monsters draws from Ferris’ childhood and the experiences of her relatives who survived the Holocaust. However, the graphic novel almost didn’t hit shelves! After it had been printed, the Chinese company that was to ship the copies from the printer to the United States went bankrupt. The novels were held up in the ship at the Panama Canal by the company’s creditors. Thankfully, matters were sorted out and the graphic novel was able to be released in February 2017.

Life Has Been an Uphill Battle

The My Favorite Thing is Monsters reviews have been fantastic. Art Spiegelman, creator of Maus says, “Emil Ferris is one of the most important comic artists of our time.” She was a struggled artist, who moonlighted as a waitress and cleaning lady. She takes inspiration from her life, especially Chicago. Some days, Ferris just lies in bed and dreams up her stories. “When I’m too worn out, or in pain, I lie in pain and write in my mind,” she explains.

We commissioned Emil Ferris to illustrate an exclusive comic for our March issue that details her stranger-than-fiction saga of creating My Favorite Thing is Monsters, out February 14th. For the rest of her tale, tap link in profile.

Ferris has written and drawn her 400-page graphic novel using Bic pens and Flair markers, giving her work a unique, signature look. When working on My Favorite Thing is Monsters, Emil Ferris would sometimes work for 16 hours a day while taking care of her 6-year-old daughter, Ruby. Today all that hard work is paying off! Though it took nearly 15 years to make her dream a reality, the artist is filled with nothing but hope and happiness. “I had gone through so many twists and turns in my life — and with this book — that I knew something good was coming. I just trusted my monsters,” she said.