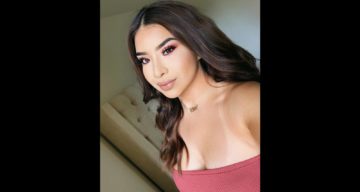 Elsy Guevara broke into the online fashion scene with a bang, and quickly established herself as one of the hottest fashion influencers on YouTube and Instagram alongside her best friend, Alondra Ortiz. Now Guevara has revealed she’s about to be a mom, and her millions of fans are excited for her. Our Elsy Guevara wiki celebrates this rising star of the fashion world.

Elsy Guevara was born on September 21, 1996 and hails from California. Fashion seems to run in the family, because Elsy and her sisters, Beatriz, Jennifer, and Patricia Guevara, have together managed to turn their passion into a thriving business.

When she was only 17, Elsy began brainstorming ideas to have her own online fashion business. The Guevara sisters began posting pictures of complete ensembles and style layouts online.

Fashion Nova, which is always collaborating with influencers, took notice of these sisters’ posts. The brand directly contacted Elsy with an offer to create content for them.

Elsy jumped on the opportunity, and what was supposed to be a one-off gig turned into a full-time marketing and  merchandising job at Fashion Nova. At 17, she was the youngest employee at the company, with a very important position.

However, Elsy wasn’t satisfied with just that and wanted to build her own brand.

Guevara Owns Businesses with Her Sisters

While she was at Fashion Nova, Guevara collaborated with her sisters to launch her first fashion business, OOTDFash. They started out of her sister’s boyfriend’s garage, growing from a single rack of clothes to a large warehouse space they leased for their thriving business.

Who would’ve thought these little 4 girls from south central would be filming with @telemundo to share their story! 🙏🏼🙏🏼 We’ve been through it all & we couldn’t be more grateful for the blessings god has given us and for keeping us strong as a whole throughout everything ❤️ The Guevara family can’t thank you guys enough for the endless support & all the love you guys always show us! We’re excited to continue as we grow and help others along the way! Can’t wait for you guys to watch 💕🥺 love you guys foreverrrr❤️ we’ll be posting more on YouTube soon🙏🏼😻

A growing online attraction and increasing sales gave Elsy and her sisters the ability to start Galifornia Wholesale, a wholesale fashion company, in 2019. Through this company, Elsy aimed to help others who want to have their own fashion store source the latest styles for their boutiques.

Guevara’s early OOTDFash store in Covina was burglarized in 2016, with the burglars making away with armloads of clothes. Their insurance reportedly wouldn’t cover the cost, but Elsy and her brother-in-law, Erik Ornelas, shared the security camera footage online in hopes that someone would identify the burglars.

While she has been doing well by herself, Guevara stepped up her online game by collaborating with her friend, Alondra Ortiz. Ortiz is a makeup artist and fashionista herself.

At first glance, their YouTube channel, Alondra & Elsy, with over 774K subscribers, is like your regular fashion vlogging channel. They do fashion hauls, challenges, and tutorials, which have earned them over 42 million views since launching in 2018.

The girls weren’t active on YouTube for a good few weeks, with Elsy’s last video from her 23rd birthday. After much speculation, Elsy finally returned to YouTube to announce her pregnancy.

Elsy revealed she was dating someone last year but wants to keep details about her relationship private until they are ready to go public. Since she revealed her pregnancy in February 2020, there has been all sorts of speculation about the baby daddy.

A few names have been thrown in the mix, with no confirmation. There are even unfounded rumors that Alondra’s ex, Tre Carter, is cheating on the influencer with Elsy and is the father of her baby. That is, however, baseless.

In her video announcing her pregnancy, Elsy expressed her focus is her soon-to-be-born child. Meanwhile, her throngs of supporters are taking on cyber-bullying trolls angry at her long absence from YouTube.