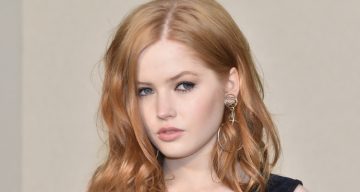 Ellie Bamber is young, talented, beautiful and is making waves with her acting in films, TV shows, and theater. She is the girl in Shawn Mendes’ music video for “There’s Nothing Holding Me Back” and is quickly becoming a bright young star to watch out for. Bamber is from England and is making waves in North America.

Have you checked out the new Shawn Mendes video, “There’s Nothing Holding Me Back?” You should, because not only do you get to see glimpses of beautiful Paris, but also the English beauty, Ellie Bamber! She appears in Mendes’ music video, in which she and the singer hold hands and get cozy as they roam around the streets taking in breathtaking views of Paris, the city of love. Ellie Bamber’s age is 20, which is a couple of years older than Mendes, but the video works because they have great chemistry on screen. The video is getting popular, and people want to know who Ellie Bamber is. Not to worry, we have some details about her in our Ellie Bamber wiki, right here!

Born on February 2, 1997 in Surrey, England, Bamber is an English actress. She attended Hawley Place School and Wellington College after winning drama scholarships from both institutions. Even though she was did well academically, Bamber left school to pursue her career. At a young age, she landed lead roles in plays and musicals while in school. She became the youngest member of the London Player’s Theater Company at the age of 12. Bamber started her professional stage career by playing Young Jenny in a production of Aspects of Love.

She made her TV debut by acting in the miniseries, A Mother’s Son in 2012 and later appeared in the BBC production of The Musketeers in 2015. Her film debut was in The Falling in 2014, and since then she has divided her time between movies, TV, and theater. Other Ellie Bamber movies include Pride and Prejudice and Zombies, Nocturnal Animals, and Bring Back the Cat. Two of her 2017 movies —namely Extracurricular Activities and The Nutcracker & the Four Realms— are currently in post-production. Bamber is not just a good actress; she has a talent for music, as well. She collaborated in the formation of the band Annoy the Boy, co-wrote original songs, and released an EP.

In a recent interview, she revealed that she chose acting as her profession, even though it doesn’t run in the family. “My mum wanted to be a dancer when she was younger but didn’t get to do it. So I think that’s why she’s always been so supportive of me following my dreams. She’s actually my ‘momager’ now. She organizes my diary and helps answer my emails. But she doesn’t come on set with me as she knows that’s when I need to bond with my co-stars,” she explained. Though it is said that blondes have more fun, Bamber is happy to have her red hair. “I love being ginger. You can be more fiery and badass,” she says!

Like most young people her age, Bamber loves to connect with people and fans through social media. Ellie Bamber’s Instagram account is proof! She posts pictures of herself in pretty dresses, with her friends, her brother, her pets, and more. There are pictures of some of her idols like Morrissey and some of her favorite quotes. It’s obvious that though she takes her craft seriously, Bamber herself is fun loving, outgoing and knows how to let loose and enjoy life.

With a heart full of dreams and a talent hungry to show its mettle, Ellie Bamber is a new star to watch out for!