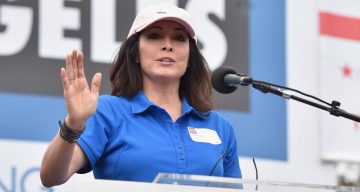 California residents are familiar with Ellen Leyva. The ABC7 news anchor has been breaking major local news with her co-anchor, David Ono, for more than two decades. Her work outside the studio also makes her a beloved personality in the Golden State and certainly demands this Ellen Leyva wiki.

Ellen and her sister, Cindy, were born to Emma Leyva Duarte, a Mexican immigrant and stay-at-home mom. Their mother passed away in 2016.

Their father, Thomas “Tom” Kraemer Lundy of Oklahoma, served in the army for two years before working as a high school math and science teacher and wrestling coach. He passed away in 2011.

Two years ago, I lost my Mom. She always loved Christmas. Dad would have to get her massive amounts of Christmas decorations down from the garage and help her set up her 3 trees! This time of year is always bittersweet.

Leyva grew up in a bilingual household and is fluent in both Spanish and English. As a child, she spent more time at home with her mother, who didn’t speak much English.

So young Leyva was introduced to Spanish from a very young age, while her mother eventually learned English by watching American soap operas on TV. Ellen also spent a large part of her childhood with her mother’s family in Mexico.

Her Latin-American roots work to her advantage on the job. She prides herself in effectively communicating with the large Hispanic communities of Los Angeles and Phoenix where she worked.

Leyva is one of the prominent Latin-American personalities in California. She has hosted the Mexican American Opportunity Foundation’s Annual National Latina Women’s Conference.

She Went to Arizona State University

In Tucson, Leyva graduated from Sahuaro High School in 1981. She went on to attend Arizona State University’s Walter Cronkite School of Journalism and Mass Communication.

She graduated in 1986 with a bachelor’s degree in broadcast journalism. However, she’d left quite an impression on her teachers at Cronkite School while she was there.

Michael Wong, who was the director of radio and TV news at ASU, counts Leyva among his students in his studio techniques class. Wong said Leyva “had a presence” and was comfortable with the camera. She was so memorable, Wong recognized her on ABC7 years later despite not having any contact with her for years after she graduated.

After reconnecting with her, Wong nominated her for the Walter Cronkite School of Broadcast Journalism’s Hall of Fame. She was subsequently inducted into her alma mater’s Hall of Fame in 2006.

She Is the Evening News Anchor on ABC7

Watching soap operas with her mom made Leyva want to be a soap actress and writer as a child. Her second career option was to host Entertainment Tonight. But her more practical side felt neither option was the career for her.

She found her calling when she discovered television news. “It seemed like a fun, dynamic job and I could do it as a mom.”

The sun sets on 2018. Have a wonderful and safe New Year’s Eve! See you all next year, (or tomorrow)

Leyva began her career in 1986, interning at a CBS affiliate station in Phoenix, Arizona. After two years, she relocated to Sacramento, California and joined the ABC News affiliate, KXTV.

She would move to Los Angeles a year later to join the local Fox station. However, in 1995, she’d come to the rival station, KABC-TV.

Since joining ABC7 more than two decades ago, Leyva has worked as a health reporter and anchored newscasts. Since 2002, she has anchored Eyewitness News in the evenings with David Ono. When she took over the timeslot, the ratings for that hour increased overnight.

Also Read: Interesting Facts about Will Carr from ABC, Who Reports from the Scene of Action

Her Husband Is a Pilot

Ellen Leyva is married to Mark Hair, a former F-15 pilot. He has retired and is now a commercial pilot.

She reportedly interviewed him once and he swept her off her feet and they’ve been together ever since.

They are parents to two grown-up daughters, Audrey and Emma. Leyva has always been a hands-on mom and prioritized her daughters over work.

She says she and her husband juggled their work with parenthood. Leyva previously covered the morning news timeslot but didn’t like it because she’s not a morning person. However, she admitted the upside of it was having the rest of the day to spend with her daughters.

With their daughters living their own lives now, Leyva and Hair adopted a sweet rescue dog they named Charli.

She Had Some Life-Threatening Experiences

A reporter’s job is not without dangers and Leyva has experienced such instances of her own. She once recalled the time when she went from reporting breaking news to becoming a part of the news herself during the 2005 wildfires in California. In September 2005, the Topanga Fire threatened thousands of homes and lives in Simi Valley, including Leyva and Hair’s home there.

In 2015, KABC-TV was evacuated after a bomb threat. The production team, however, made it possible to broadcast Eyewitness News from the lawn outside the building. Leyva and Ono, along with the rest of the team, did the 4:00 p.m. newscast as usual while the authorities checked the building for any threats.

Less than an hour into the broadcast, authorities ruled the bomb threat to be a hoax and gave the employees the all-clear to enter the building.