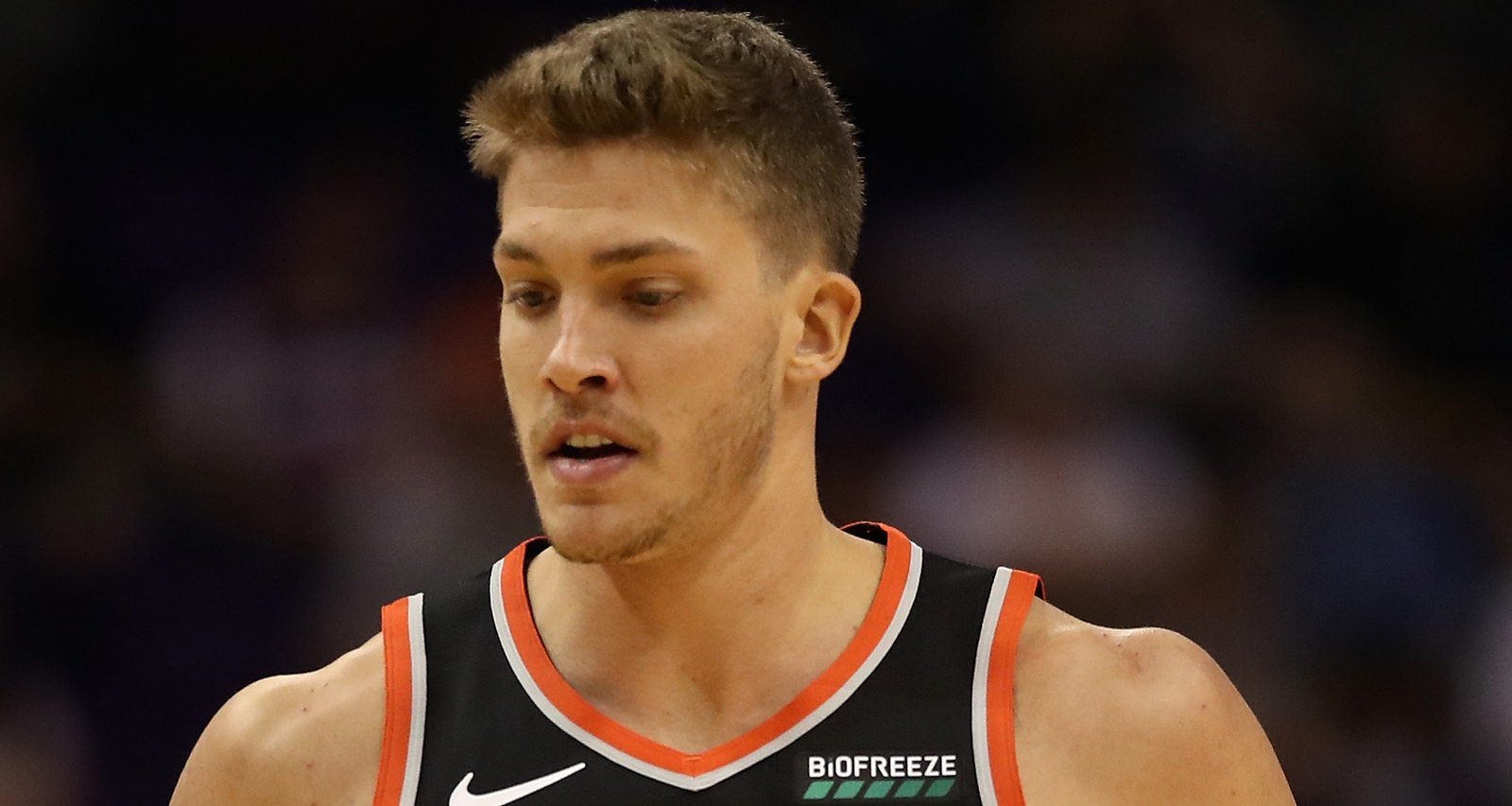 Meyers Leonard of the Portland Trail Blazers during the NBA preseason game against the Phoenix Suns at Talking Stick Resort Arena on October 5, 2018 in Phoenix, Arizona. (Photo by Christian Petersen/Getty Images)

Elle Leonard could probably run circles around her husband, even if he’s the NBA pro. Portland Trail Blazers’ Meyers Leonard’s wife broke the Internet with a viral video of her playing H.O.R.S.E. And here we thought she couldn’t make us love her more! Elle not only stands out in the league as a WAG, but she’s amazing in her own right. Our Elle Leonard wiki will prove just how.

Born Elle Bielfeldt on January 15, 1992, she’s one of four children born to David and Julie Bielfeldt. Together with her brother, Max, and sisters, Lydia and Matti, Elle grew up in Peoria, Illinois.

Happy 25th Birthday to my one and only! You make life better than I ever could've imagined. Love you 😘

The Bielfeldt family has a long-running association with the University of Illinois at Urbana-Champaign. Elle’s parents, grandparents, and several uncles and aunts attended the university. The family has also donated millions to the university’s athletics program.

Her sister Matti also played for the Fighting Illini women’s basketball team. Max, who didn’t go to Illinois, is one of the top basketball players at the University of Michigan.

Elle graduated in 2014 with a bachelor’s degree in advertising. She maintained a 3.73 GPA while serving as the vice-president of her sorority and participating in the American Advertising Federation.

College is also where she met her future husband, Meyers Leonard, during her freshman year. As Meyers recalled, “I didn’t go out a whole lot at Illinois, but I did a few times after the season was over my freshman year and I noticed her around. She was friends with the girlfriend of one of the senior basketball players (Mike Davis). We studied together a couple times, then we started talking more and dating that summer.”

Elle and Meyers Married in 2015

Elle was with the Leonard family when they celebrated Meyers’ selection by the Trail Blazers in the 2012 NBA Draft. Meyers was in Portland during his rookie year, but they made their long-distance relationship work.

In May 2014, Elle’s family threw a massive graduation party where Leonard proposed to her in front of her family and sorority sisters. She said yes and they tied the knot in Oregon on August 2, 2015.

Best surprise of my life 😊💍

As if it wasn’t obvious from her recent viral moment, Meyers Leonard’s wife is an impressive basketball player herself. In fact, basketball is very important for the Bielfeldts.

Elle confessed recently that she wasn’t good at the sport until she went to a coed basketball camp with her brother. She was the only girl but didn’t want to look weak, so she practiced until she got better.

She made it as a four-year starter at Peoria Notre Dame High School with over 1,000 career points. She opted not to play basketball so she could attend the University of Illinois where her family went.

However, she continues to practice basketball. Elle has come a long way since middle school—from being called a “brick” on the court by her dad for being unable to make a shot, to nailing trick shots.

“One thing I’ve always been able to do is shoot,” Elle said. “I’ll shoot a few times a week. I would equate it for when people go for a run. It feels relaxing. That’s what shooting is for me.”

Elle Has a Fitness and Nutrition Brand

Coming from an athletic family, Elle has always had an active lifestyle. When her beau became an NBA player, health took precedence in her life.

As Portland fans would know, the 2016-17 season wasn’t great for Leonard. His performance on the court was dismal due to health issues stemming from injuries and a thyroid problem.

His health improved with the help of a nutritionist and Elle saw that everyone could use some guidance on healthy living. So she started an eponymous blog on wellness—including some great recipes—based on her experiences.

Meyers’ nutritionist had pointed out that his health issues were related to his food, and a restructured diet made him healthy once again. But it was easy to fall back into his old diet during the busy NBA season, which led to Elle offering him nutrition bars that would prevent his inflammation from returning.

But not every bar fit into Meyers’ prescribed diet. So Elle made them herself according to his needs. That led Elle to found Level Foods, her brand of nutrition bars, in 2018.

We were onto something

Besides doing her own thing, Elle Leonard is also the business manager of the Meyers Leonard Brand.