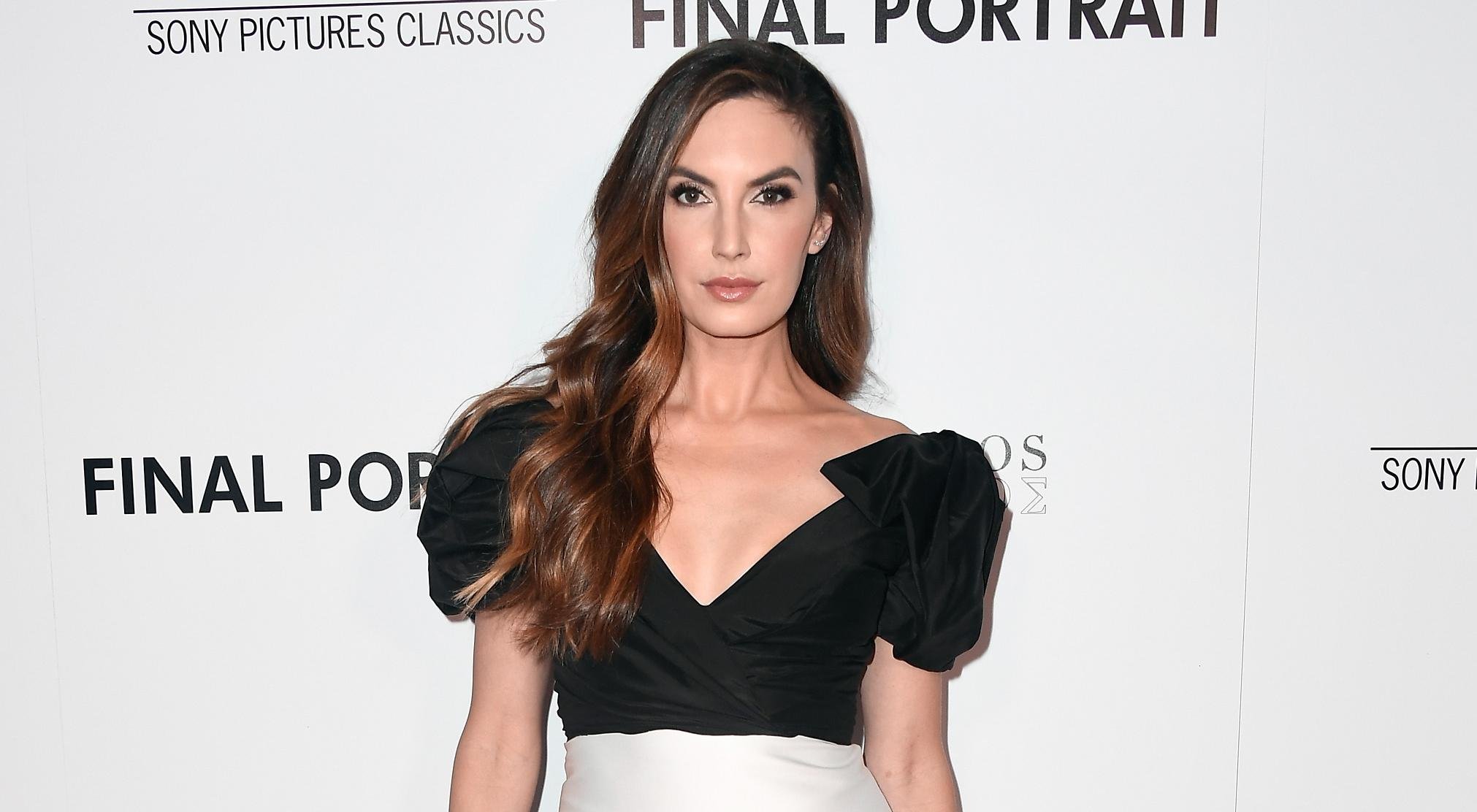 Elizabeth Chambers is an actress and TV show host and correspondent, as well as an entrepreneur. She is also smart, talented, beautiful, and ambitious. She is actor Armie Hammer’s wife and the mother of their two children. How does she handle so many responsibilities and still have a smile on her face at the end of the day? Like hubby Hammer says, Elizabeth Chambers is one extraordinary woman!

Actor Armie Hammer got a lot of kudos when he joined the Hollywood movement against sexual harassment by wearing black clothes at the Golden Globes ceremony in January 2018. A big reason for his decision was his beautiful wife Elizabeth Chambers, who knows all about the struggles of the women in big bad Hollywood, as she is an actress herself.

Chambers is also an entrepreneur and has been a correspondent for entertainment news channels and programs. She and her husband, Armie Hammer, make one of the hottest young couples in Hollywood.

Here are a few details from Elizabeth Chambers’ wiki.

Chambers has three siblings. She has a younger sister is named Catherine Chambers and two brothers named Joseph and John Chambers.

As a child, Elizabeth Chambers was a Girl Scout with the most unusual but impressive record. She set the state record in Colorado for selling the most Girl Scout cookies when she was only in the second grade!

Chambers says that the real credit should have gone to her father because he taught her everything about sales and she took his lessons to heart. She sold cookies in all kinds of circumstances like in the rain, snow, and sleet. Now, that’s young detemination!

She even set up shop outside local liquor stores to sell her cookies. That’s how she got the entrepreneurial spirit that now serves her so well in her adult life. 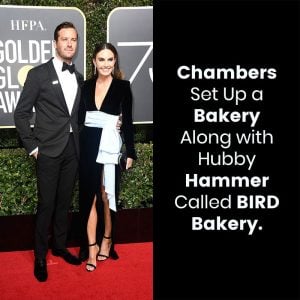 Elizabeth Chambers made her acting debut in 2002 by playing the role of a groupie on the TV show, Going to California. She also acted in films such as Rolling Kansas and The Game Plan starring Dwayne “The Rock” Johnson.

Chambers has hosted shows like YourLA, The Strategy Room, and Green Living, and has appeared on shows like TakePart Live, The Tonight Show with Jay Leno, and The Kitchen.

She has also been a judge on a bunch of shows like Sugar Showdown, Cupcake Wars, and Chopped Junior. 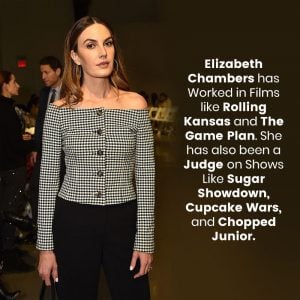 She Is an Entrepreneur

The company has steadily grown since then and today employs more than 80 people. Its partners include eateries like Shake Shack.

Ugly sweater season for a reason. Teaming up with @stjude to raise money for children at St. Jude’s research hospital. Tag your ugly sweater photos with #UglySweaterforBetter and @kmart will donate $1 per post. Maybe just tag all of your photos if someone’s wearing a sweater and see if that works.

About her bakery, Chambers said, “I always say a bakery is not so effortless as romantic comedies make it look. Definitely, there is a lot of behind-the-scenes blood, sweat, and tears. But also it’s a lot of physical labor; I don’t think you really think about that.”

No wonder Hammer can’t stop gushing about his wife!

When he was asked what he loved most about her, Hammer said, “Everything. That’s the easy answer. Uh, her brain, she’s one of the smartest people I know. [She’s] way smarter than me!” 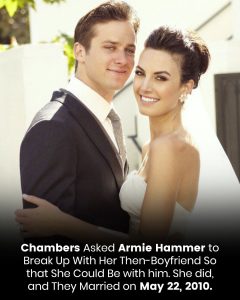 Hammer met Chambers through a mutual friend in 2006, but they were both dating other people. They started dating each other in 2008.

The actor was so besotted with Chambers that he asked her to break up with her then-boyfriend so that she could be with him. And she did!

Chambers spoke about Hammer’s relentless efforts to woo her and said, “When we finally got together, Armie really wanted to get married. He sat me down and set, ‘Look, we don’t have to do this. We could just go our own ways, and then one day you’ll be 40 and divorced and we’ll run into each other, and we’ll laugh and go out to dinner and have this same connection, and we’ll wonder why we wasted all of that time. Or we could just do it now and enjoy the ride.” Well, it was certainly convincing!

Chambers agreed, and their wedding took place at a church in Beverly Hills on May 22, 2010. It was a colorful affair with shades of pink, green, and a classy touch of white for the happy occasion.

The tables were covered with white tablecloths, which complemented the fuchsia chartreuse runners, personalized napkins, and alternating green and pink chair cushions. They were also decorated with beautiful roses, hydrangeas, and ranunculus blossoms, along with two tall glass stands filled with pearls and topped with creamy roses. 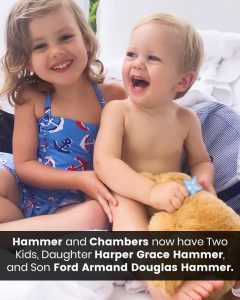 Hammer and Chambers now have two kids. They welcomed their daughter, Harper Grace Hammer, in 2014. Then, in 2017, Chambers gave birth to their son, Ford Armand Douglas Hammer.

Chambers regularly posts pictures of her children on her Instagram account. (They are the definition of adorable!) Even though taking care of their children and their work schedules take up a lot of their time, both Chambers and Hammer strive to spend quality time together to keep their relationship fresh.

She said about their relationship, “We do a sushi date night either every Wednesday or Thursday. I think it’s really important. We realized really early on that that was the key to connecting…We have so many social things, so for a while, we were calling those social things date nights, and then you realize it’s that one-on-one time you need.”

Money Is Not a Problem

Chambers has no financial worries because she earns plenty from her business, as well as her acting and hosting gigs, and working as a correspondent.

Additionally, Hammer keeps busy with his acting career. He has a cool net worth estimated at $16.0 million and growing.

A Happy and Fulfilling Life

Elizabeth Chambers’ Instagram account is full of pictures of her having fun and checking out street food. She can also be seen spending time with Hammer, their two children, and friends and colleagues.

There are also posts of some of her idols like Princess Diana and of magazine covers featuring the beautiful and stylish Chambers.

Everything Is Simply Great!

These days, Chambers is busy taking care of her two children and running the household, as Hammer’s burgeoning career keeps him away from home more and more. She continues to work in films and on TV shows while keeping a close watch on her BIRD Bakery. All this hard work and she looks stunning all the time!

Elizabeth Chambers has proved that with hard work and determination, it is possible to have it all and look good, too!