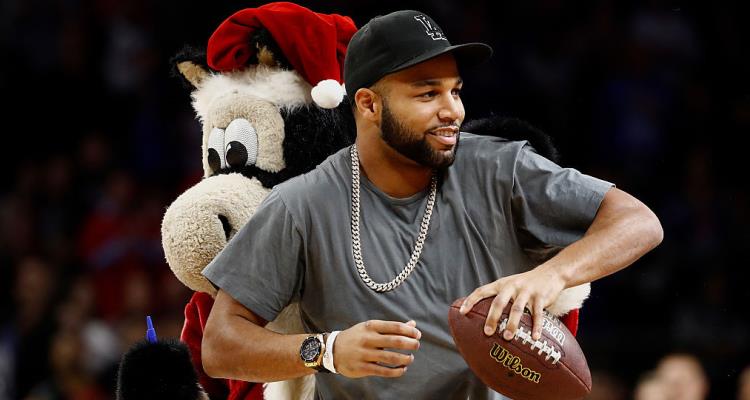 When you look at pictures of Golden Tate and Elise Tate, it’s easy to see just how in love these two truly are. And their affection for one another is only magnified by the fact that they are going to be parents! Is Elise Tate Pregnant? Yes, she is! If you haven’t noticed, Golden Tate’s wife is one gorgeous woman, and with a couple this good-looking, they’re bound to make one beautiful baby! We’ve got all the information you need to know about this wide receiver’s wife, right here in our Elise Tate wiki.

While they look like the epitome of absolute perfection, things haven’t always been so peachy for the lovebirds. Of course, every couple faces adversity at one point or another, but when you’re constantly in the public eye at such a young age, it seems like every little controversy is amplified tenfold. It takes a truly strong couple to overcome public scrutiny, especially living a life of fame. While the Tates have certainly been the subject of some truly unsavoury comments from football fans because they happen to be an interracial couple, that’s not the only point of contention the couple has publicly faced—but more on that later. However, Golden and Elise Tate do have a great deal of support from fans (many of whom are huge Detroit Lions fans) and have shown their genuine support for the couple. It seems kind of lopsided that there’s so much information out there about Golden, but hardly anything about Elise! What is Elise Tate’s job? How did the couple meet? We’ve done some digging to bring you the facts about this beauty of a football wife!

Happy birthday to the man who completes me and I look up to in every way. So thankful for you baby, and for our obsession. love you u love you I love you times infinity @showtimetate

She Has a Heart of Gold (Pun Intended)

In fact, Elise and Golden have been instrumental in helping to organize and execute multiple public proposals during Lions games for United State veterans. Thanks to her job at Harvey Nash, Elise Tate has exclusive connections with famed jeweler, Ritani. Alongside the Golden Future Foundation, the jeweler works closely with the veterans to design their fiancées’ dream engagement rings.

#Repost @goldenfuturefdn ・・・ AMAZING pregame… this #GoldenMoment brought to you by @goldenfuturefdn and @ritani. Eric, @geezye26 our special veteran #GoldenFutureFoundation honored today, got engaged to the love of his life, @darienholden thanks to @detroitlionsnfl player @showtimetate foundation for #Veterans Eric served in the Navy for 6 years, and has been through a whollleee lot lately, after returning home from the service only to find out his father had cancer, he sacrificed a lot to pay for medical bills. He is the true definition of an america hero. Always putting others before himself. Today, we are honored to put him (and future wife) first, and honor him today! #GFF treated Eric and Dariens entire family to a suite for the game…. The suite was filled with congratulatory signs and photos of Eric during his service, and most importantly was filled with photos of Eric's father who recently passed from cancer… He was surly with them celebrating today. What a happy, wonderful day. #nfl #goldenfuture #supportourtroops thanks to @iava for helping us find this deserving veteran

Above is an image of United States veteran, Eric Gestring proposing to his then-girlfriend at a Lions game in front of both of their entire families on live national TV!

After the Lions W with the happy #newlyengaged couple!! Hope you saw their engagemt live on CBS!! Thank you @goldenfuturefdn @ritani so awesome to be a part of our deserving 10yr Veteran Nik Schieder and now fiance Sheena's engagement!! #salutetoservice #nfl

You Don’t Want to Get On Her Bad Side…

As giving and thoughtful as Elise Tate is on Instagram, she can also be completely savage, especially if you try to mess with her friends and loved ones! She proved just that when she clapped back at an Internet troll who had the nerve to trash talk her friend, Ashton Meem, on her private Instagram account. Ashton is the ex-wife of Golden’s former Seahawks teammate, Russell Wilson. At the time, vicious rumors were circulating that Golden had cheated on Elise, who was his girlfriend, with Ashton, who was already married to Russell. Many believe this scandal is what led to Russell’s and Ashton’s divorce. However, all parties involved have continued to wholeheartedly deny the rumors, claiming they’re just speculative lies. So, when this troll took it upon himself to write nasty comments on Ashton’s Instagram, Elise was the one who responded—by tagging the troll’s family members “so they know how heartless and disrespectful [he is] to women, while hiding behind social media.” And she did just that. Damn!

Golden and Elise Tate Got Married in Cabo!

After a somewhat lengthy engagement (not to mention helping plan other people’s romantic proposals through the Golden Future Foundation), Golden and Elise Tate finally tied the knot on March 11, 2017. The nuptials were accompanied by week-long festivities that featured 250 of the couple’s closest friends and family members traveling to Cabo San Lucas, Mexico, to take part in the celebrations! Every detail was absolutely perfect, from the scenic destination to Elise’s self-designed stunning wedding gown and the gorgeous floral wedding cake. Even their wedding hashtag #ittatestwo was extremely clever! It couldn’t have been cheap, and though there’s no information on Elise Tate’s net worth, her husband should have had no problem splurging for their big day! It is reported that he has a net worth of over $9.0 million! (After all, being a wide receiver for the Detroit Lions doesn’t come cheap!) Check out a few of the heart-bursting pictures below as these two really do take your breath away.

Their First Baby is Already On Its Way!

In case you were still wondering if Elise Tate is pregnant, the answer is a resounding yes! Not that it was a big secret or anything. After all, she did post adorable pictures displaying her baby bump on Instagram for all to see! No details have been disclosed yet regarding the baby’s sex or Elise’s due date, but in the meantime; enjoy these beautiful pictures of Elise frolicking on the beach with husband Golden Tate in all of her pregnant glory!

I used to think baby bump pictures were soooo weird… but now that it's our baby GIRL ? in there… Let's just say I have a whole new appreciation for every woman's bump, every baby, every life, and ummm yah the female body is amazing!! #minime #tatertot #ourpreciouslittledaughter ? Psalm 139:13. ?: @elatephoto