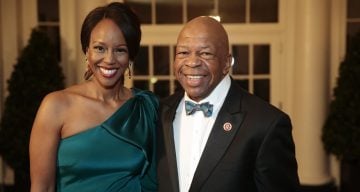 Rep. Elijah Cummings of Maryland’s 7th congressional district passed away on October 17, 2019 at the age of 68.  He’s survived by his children and his wife Maya Rockeymoore, a force in the Maryland Democratic Party herself. Together they made a political power couple. After Cummings’ death, Rockeymoore shared a heartfelt tribute celebrating her husband’s work which she too was a part of. Our Maya Rockeymoore wiki sheds more light on this impressive woman married to a hardworking policymaker.

Maya Rockeymoore Was Appointed Chair of the Maryland Democratic Party

Maya Rockeymoore, born on January 31, 1971, married Rep. Elijah Cummings in 2008. They don’t have any children together, although Cummings has two daughters, Jennifer and Aida, and a son from previous relationships.

A Texas native, Rockeymoore is the daughter of Hazel Brown Rockeymoore and U.S. Air Force soldier Thomas Charles Rockeymoore. Maya, her brother, Mark, and sister, Meredith, grew up in a military family with parents active in the community, in the Democratic party, and in their church.

Elijah Cummings is a well-known face in Maryland, having served in the Maryland House of Delegates for 14 years and currently serving his 13th term in the House of Representatives from Maryland’s 7th Congressional district. But Rockeymoore is more than just the longtime Congressman’s wife.

In 2018, Maryland Democrats elected Rockeymoore as party chair. Rockeymoore won the vote over incumbent, Kathleen Matthews, 438-319. With the Maryland governorship falling into Republican hands, there was much dissatisfaction against Matthews for losing the post to Rockeymoore.

Yesterday was incredibly gratifying and a whirlwind of activity. I’m thankful for all of the people who made my ascension to chair of the Maryland Democratic Party possible. My nominators, Maureen Evans Arthurs, Sheila Ruth, and Ben Smith were simply terrific in making the case for my candidacy. The volunteer whips in the various counties were effective and efficient. And the full body gave me their vote of confidence with an overwhelming majority confirming me as chair of the state party. I thank the former chair, Kathleen Matthews, for her service and friendship and look forward to working with her during this transition period and beyond. The full body also selected an inspiring cabinet of officers with the experience and abilities to drive home our Go DEEP Agenda. The road ahead will not be an easy task but it is a task worth doing to protect and expand the well being of Maryland families. I look forward to collaborating with all stakeholders to strengthen our party and to make it a model for the nation. Finally, last night we celebrated the inauguration of Angela Alsobrooks, an accomplished former prosecutor and beautiful WOG who is now the Prince Georges (MD) County Executive. Elijah and I are very happy for her and wish her much success in this role. Enjoy the rest of your weekend! #democracy #elections #democraticparty #modernization #maryland #mdpolitics #democrats

A post shared by Maya Rockeymoore Cummings (@rockeymoorecummings) on Dec 2, 2018 at 2:46am PST

In 2017, Rockeymoore announced her bid for Maryland Governor, her first run for a public office. She was one of the two women and three African-American candidates in the Democratic primary.

She hoped to be the Democratic gubernatorial candidate against Gov. Larry Hogan in the 2018 elections. If elected to the governor, she would have been the first woman and first black governor of Maryland.

She gained the endorsement of EMILY’s List, a pro-choice political action committee that aims to elect female candidates.

However, Rockeymoore suspended her campaign in January 2018 citing “personal considerations.” Not long after, it was announced her husband was hospitalized over health concerns.

Rep. Cummings had surgery to repair his aortic valve in 2017 and suffered a few complications weeks later. In December 2017, he was treated for an infection in his knee. However, Rockeymoore’s campaign did not elaborate if her husband’s health had anything to do with her dropping out of the race.

Rockeymoore Has a Doctorate from Purdue University

Though a novice in governance, Rockeymoore has an impressive academic background and experience with public policy. She proudly proclaims her HBCU education from Prairie View A&M University in Texas.

She graduated from PVAMU in 1993 with a bachelor’s degree in political science and government. She later acquired her master’s degree from Purdue University in Indiana, in 1996.

She went on to receive her Ph.D. in political science from Purdue in 2000. At Purdue, she specialized in public policy, international relations, American politics, and African-American studies.

A post shared by Maya Rockeymoore Cummings (@rockeymoorecummings) on Dec 20, 2018 at 4:55pm PST

Rockeymoore Was a Congressional Aide

While pursuing her masters in Indiana, Rockeymoore served as an administrative assistant to the director at the Marion County Health Department. Soon after receiving her post-graduate degree, she came to Washington, D.C., where she gained experience in public policy.

She worked in the office of former Congressman Melvin Watt as a Congressional Black Caucus Legislative Fellow. She later joined the staff of the House Ways and Means Social Security Subcommittee.

From 1999 to 2000, Rockeymoore was a congressional aide and chief of staff in the office of Congressman Charles Rangel, the Representative for New York districts from 1971 to 2017.

Among her other accomplishments, she was a senior resident scholar with the National Urban League and vice president of research and programs for the Congressional Black Caucus Foundation.

As the president and CEO of Global Policy Solutions, she works on public relations, analysis, strategy development, and securing grants and donors.

Her book, The Political Action Handbook: A How to Guide for the Hip Hop Generation, traced the influence of hip-hop on youth political activism.

Also Read: What Is Senator Richard Blumenthal’s Net Worth?