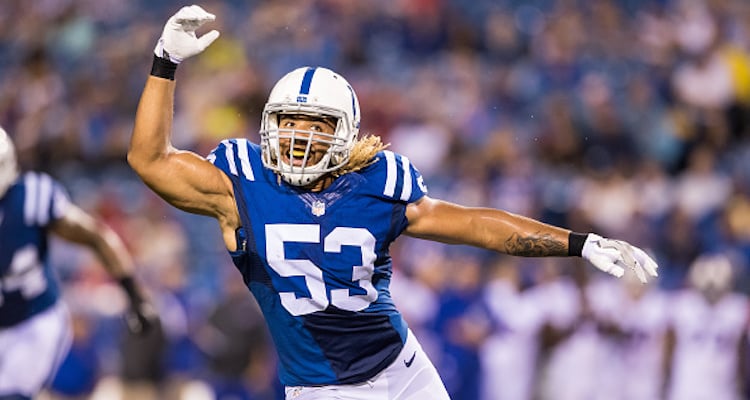 Just as the Philadelphia Eagles and New England Patriots were gearing up for one of the biggest games of their lives, word came down that Indianapolis Colts linebacker, Edwin Jackson was tragically killed. In this article, we’ll take a look at the short career of Edwin Jackson. From his start on the football field to Edwin Jackson’s career earnings, we’ll examine this life that was sadly cut short.

A Life in Sports

Edwin Jackson attended Westlake High School in Atlanta, Georgia and like many professional athletes, he excelled in more than just football. During his high school career, Jackson was a letterman in not only football but wrestling, as well.

As a wrestler, he competed at 189 pounds and did it quite well. He was the regional champion of his school district in junior and senior years. But eventually, a choice had to be made between his two passions and in the end, football won.

The Road to Pro Ball

The road to Edwin Jackson’s NFL career doesn’t start with scouts fighting over him for their college team, or huge scholarships for that matter. In Jackson’s case, he wasn’t recruited to Georgia Southern University’s football team. He made the team as a walk-on. He did well and was eventually voted to team captain in his senior year.

While his team did have some success, it was obvious that Jackson was one of the standout players. But it took Jackson’s own spirit to make sure he was noticed.

From the Cardinals to the Colts

When it came to time for the NFL draft for the 2015 season, Edwin Jackson’s family sat by the phone. They heard nothing. The draft came and went and Jackson remained unsigned. But in May 2015, the Arizona Cardinals picked Jackson up as an unsigned free agent.

As it turned out, the Cardinals still didn’t see much in Jackson. After playing in the pre-season with the Cardinals, the team cut Jackson on August 31, 2015, and he was momentarily set adrift in the world of pro-football.

Jackson proved his worth though, playing in all 16 games of the 2016 season and starting in eight of those games. His 2017 season was sadly curtailed by injury.

How Much Did Edwin Jackson Make?

It may seem a little bit macabre at this point, but people have a genuine interest in what an athlete makes financially, even when they are gone.

How rich was Edwin Jackson? Edwin Jackson’s death cut short the promising career of a football player who would not accept “no” as an answer. His career earnings reflect that in a number of ways.

Unfortunately, the career and life of Edwin Jackson was cut short at the carelessness of a drunk driver, who struck and killed him and his Uber driver as they were parked at the side of the road early Sunday morning.