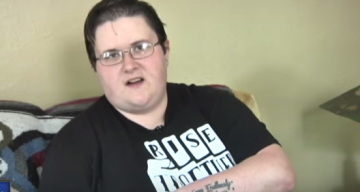 How did Amy Bleuel die? That’s still the question on many people’s minds when the topic of Amy Bleuel’s cause of death comes up.

Amy Bleuel wasn’t famous or a household name in any way, but to those who needed her, she was their version of a rock star. There are people who struggle with mental health issues everyday and many more that go undiagnosed due to the fear of stigmatized. So, if you’re looking for more information on the mental health advocate, then have a look at our Amy Bleuel wiki, right here.

Amy Elizabeth Bleuel, 31, of Green Bay, Wisconsin was born on August 1, 1985 in Wausau, to Jeanne Schmidt and Mark Burg. Amy Bleuel’s husband was David Bleuel and they were married on June 21, 2014.

Project Semicolon is a movement to aid those battling depression, mental health, addiction, and suicide. It was started by Bleuel in 2013, after her father had committed suicide.

Why Choose a Semicolon?

Many have wondered why the late mental health advocate chose that name for the project, but she revealed her reason in an interview with People, back in 2015.

“The semicolon was chosen because in literature a semicolon is used when an author chooses to not end a sentence,” said Bleuel. “You are the author and the sentence is your life. You are choosing to continue.”

The symbol was the perfect metaphor to continue someone’s life and to push forward, despite the many obstacles life throws at you on a daily basis.

Bleuel had three semicolon tattoos: one on her left arm for her dad, one on the back of her right leg for her best friend (who was going through a difficult time at the time Project Semicolon was founded), and one for herself on her left arm above her elbow.

To this day, Bleuel’s cause of death is unknown, but her obituary stated the following: “Amy graduated from Northeast Wisconsin Technical College in December 2014 where she earned a degree in graphic design and a certificate in printing. Amy founded Project Semicolon. Her work following graduation was centered on raising awareness of mental illness and suicide prevention. She gave presentations on behalf of the Project to groups throughout the country.

Amy loved to travel. She and her husband especially enjoyed photography and photographing their many adventures together. She was an active member of Spring Lake Church in Green Bay.

Amy is survived by her husband David, mother Jeanne, stepfather Kelly, three brothers Bob, Brian, and Joshua, two sisters Alicia and Tricia, her favorite nephew Alec, mother and father-in-law Jayne and Bernard, and brother-in-law Andrew. She is further survived by many other friends and relatives. Amy’s father Mark preceded her on September 9, 2003.”

Being the Face of the Project was Healing

In a 2016 interview with the Washington Post, Bleuel said, “People want to know they’re not suffering in silence, you feel alone like no one cares, to know someone is there, that is what these people go forth with, they take this energy to better themselves.” She added, “I think it’s just opening the minds of society. I would hope through my stories and platforms that they would see these are everyday people, just like you, and they’re attempting to make their lives better, but here is what they struggle with.”

“I wanted to start a conversation that can’t be stopped,” she said, “and I believe I’ve done that.”

Even though her untimely passing saw Bleudel taken too soon, she will continue to be an inspiration to those all over the world struggling with depression, suicide or mental health issues. May she rest in peace.