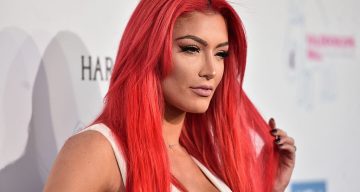 Eva Marie is a WWE wrestler who stars in the American reality TV series, Total Divas. And with the new season of Total Divas beginning to ramp up, many fans have questions like, “Why was Eva Marie suspended from WWE?” We’ve done some digging, and we think we’ve got the answer for you.

Even though the action in the ring is predetermined, there are many things about WWE performers that are completely unscripted. Sometimes, a wrestler can become injured. Or, a wrestler may violate the WWE’s wellness policy and become suspended for a period. And then occasionally, a wrestler just mysteriously disappears, never to be seen again.

Such is the case of Eva Marie. So, what happened to Eva Marie on Total Divas?

Keep reading to get the scoop!

The last time fans of Total Divas saw Eva Marie, is when she had just been suspended by the WWE for violating their wellness policy. She was suspended for 30 days, which was the cliff-hanger at the end of Total Divas season 6. And after her suspension was up, Eva Marie just disappeared.

Are you watching with us? Join the conversation on Twitter right NOW for the chance to win signed posters from the Superstars! Use #TotalDivasSweepstakes when you tweet! No Purchase Necessary. Must be US resident and 18+. See the link in bio for the official rules!

It’s not like Eva Marie lost a big match or was involved in a wrestling storyline to get her off television, like a “loser leaves town” match. There clearly was no big send-off or last match—Eva Marie is just gone.

What Happened to Eva Marie?

The WWE created a wellness policy in 2006 after the death of one of its wrestlers, Eddie Guerrero, at a rather young age. The policy involves random drug tests, as well as physicals and medical exams.

While most drugs are outright banned by the policy, some prescription drugs are allowed. But, you have to have proof of a doctor’s prescription for them.

Eva Marie was drug-tested, and she tested positive for Adderall. And although she had a prescription for it, she failed to get the necessary paperwork to the WWE on time. So, she was suspended on August 18, 2016.

At the same time that this was going on, Eva Marie was exploring other career options, as wrestling has a fairly short career window for many performers. She has a degree in business management.

So, Eva Marie quietly began removing references to the WWE in her social media accounts in February of 2017. She also began taking acting classes and got rid of the fiery red hair that she sported during her wrestling career.

Dany Garcia had taken notice of Eva Marie and signed her to the Garcia Companies as Eva Marie’s manager. It should be noted that Garcia is partners in a production company and other business with her ex-husband, Dwayne “The Rock” Johnson.

Johnson credits his ex with helping to resurrect his career and make him the Hollywood star he is today. While the two divorced, they maintain a friendship and great business relationship. If Eva Marie is going to succeed in the world of acting, having these two titans behind her is a very good play.

In July of 2017, it was quietly announced that Eva Marie would not be returning to Total Divas. This was followed by another announcement in August saying that she had parted ways with the WWE.

The relationship between the WWE and Eva Marie is still amicable despite her leaving the company. She has stated in interviews that she may be open to returning at some point, so it’s not out of the question, especially if she does well as an actor.

For example, Dwayne Johnson and John Cena can essentially wrestle and do movies when they want. So, if Eva Marie’s acting career does well, there’s little doubt that the WWE would welcome her back into the ring with open arms.