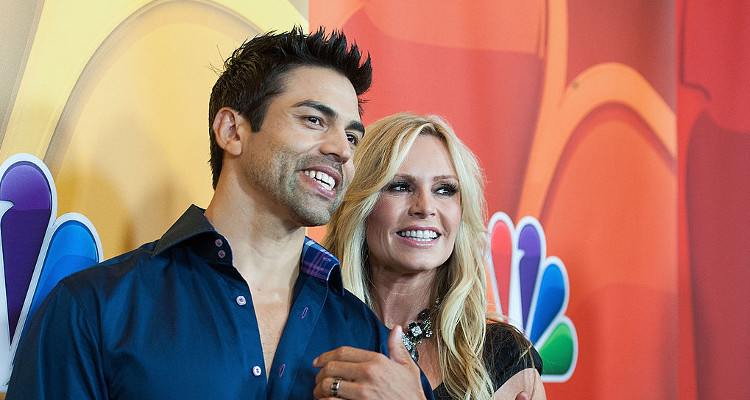 Rumors have been flying around for a while now that Tamra Judge’s husband Eddie Judge is gay. Now a former friend claims to have actually seen Eddie “making out” with another guy.

Eddie’s wife Tamra has defended him. She says that these rumors are false and Eddie is straight. But still, the rumors refuse to die down.

You have to feel sorry for Tamra Judge. Not only does she have to listen to the constant rumors that her husband Eddie Judge is gay, but now she hears it from some of her closest acquaintances.

These rumors spoiled Tamra’s friendship with Vicki Gunvalson. And now they threaten her relationships with the other women of Real Housewives of Orange County (RHOC).

But this time, this cruel accusation is coming from Ricky Santana, a former friend of the couple who was present at their wedding. He said, “I saw him [Eddie Judge] making out with a guy. Making out with tongue.”

Audiences might remember Santana from his appearance earlier on RHOC and Tamra’s O.C. Wedding spin-off. Santana is the one telling others on RHOC that the Eddie Judge gay rumors are true!

So, is Eddie Judge gay? We’ll tell you what we know about this juicy bit of gossip that has everyone in splits and Tamra Judge in an uproar.

Also Read: Sidney Barney: Everything You Need to Know about Tamra Judge’s Daughter

The people who were present when Santana made his startling claim were Vicki Gunvalson and Kelly Dodge, as well as ex-Housewives Gretchen Rossi and Lizzie Rovsek.

Tamra saw the episode after it was aired and has since slammed all those present, calling them “homophobic bullies.” She has shared her comments on Twitter and Instagram and is hopping mad at this “betrayal” by her supposed friends.

She posted a photo of a smiling Eddie Judge and wrote, “How orchestrated and wrong was that? The worst acting I’ve ever seen. They are nothing but homophobic bullies that think it’s okay to try and Out a straight man hoping to humiliate him. Well, guess what it didn’t work! It’s Not the 1920’s and being gay is not something to be ashamed of or mocked. You should all be ashamed of yourself. We all know who was behind this …. bye.”

What's in your water? ? This mix of caffeine, B-vitamins and amino acids is all I need for mental clarity and energy. Have you tried Spark? Re-Post this to win a bag of Pineapple Coconut Flavor Spark. (Please tag me on your repost) It's perfect for Summer flavors… I'll choose the winner on Sunday July 23, 2017. No Rules, just fun. To order, visit: www.teamcutfitness.com

He owns and operates CUT Fitness along with his wife, and is very interested in having a healthy lifestyle. Everything was going fine for Tamra and Eddie Judge until a big bump on the road appeared—the rumors that Eddie is gay!

Santana maintains that he is telling the truth about Eddie’s rumored homosexuality. He was asked why he is saying such things if he was indeed one of their best friends. Santana flat out said, “Because it’s the truth!”

We cannot confirm this bit of information, but both Tamra and Eddie Judge have denied the accusations that Eddie is gay. Whatever the truth is, the Judges know best!