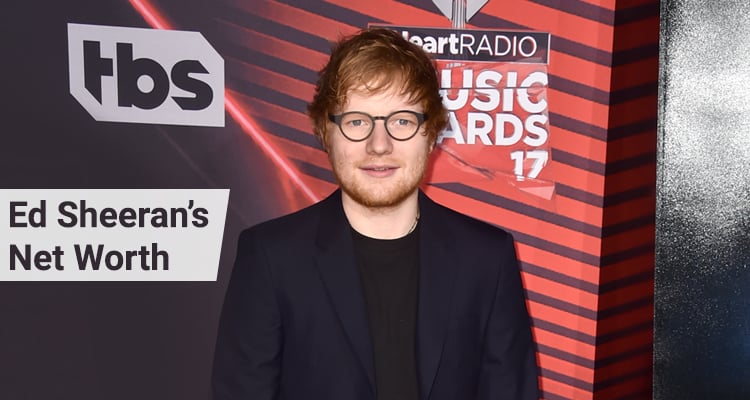 Singer/songwriter, Ed Sheeran recently graced us with his latest album, Divide and needless to say, fans are really impressed! With the success of this new album already off to a great start, Ed Sheeran’s net worth (which is currently estimated to be $84.0 million) will likely be getting another boost. Let us take a look at how much money Ed Sheeran made this year.

Ed Sheeran’s latest album Divide was released on March 3, 2017. If the success of his third album continues the way it is, it will certainly gain the English songster new fans and multiply his net worth. No matter how you look at it, Ed Sheeran has some unique talent.

In six years, Sheeran has released three critically acclaimed albums selling millions of copies all over the world, earning him various award and nominations. With his booming net worth, he still donates a lot to charity. Keep reading to find out more about Ed Sheeran’s songs, albums, and net worth.

Where is Ed Sheeran From?

I graduated today, I am now officially Dr. Sheeran

Edward Christopher Sheeran was born on February 17, 1991 in Hebden Bridge, West Yorkshire, England. When he was younger, Sheeran and his family moved to Framlingham in Suffolk. Ed Sheeran’s parents, John and Imogen Sheeran, were born in London and he has an older brother, Matthew, who is a composer. Ed’s paternal grandparents were Irish.

Sheeran’s father is an art curator and a lecturer, while his mother is a jewelry designer. From 1990 to 2010, Sheeran’s parents had an independent art consultancy called Sheeran Lock, which meant that the family spent most weekends traveling to London and playing music on the way. During an interview, Sheeran stated that Van Morrison’s Irish Heartbeat was the first album that introduced him to music.

From a very young age, Sheeran had a love for music. At the age of four, he sang a local church choir and learned to play guitar. He started writing songs while studying at Thomas Mills High School in Framlingham. To further pursue his career in music, Sheeran was a part of Access to Music, where he studied Artist Development Course. As a teenager, he was accepted at the National Youth Theatre in London.

How Much Money has Ed Sheeran Made This Year?

Ed Sheeran’s net worth in 2017 is estimated to be a whopping $84.0 million. At 26, his money is earned from concerts, tours, albums, songwriting, YouTube, merchandise, and endorsements. Ed Sheeran’s first album sold over four million copies. From then on, there was no looking back for the “Thinking Out Loud” singer. Let us take a look at how Ed Sheeran’s net worth has increased over the years.

As one of the most hardworking artists in the industry, it is not surprising that he was able to earn so much at such a young age.

A Breakdown of Ed Sheeran’s Wealth

Ed Sheeran’s 2016 income is calculated to be approximately $16.7 million. Even though he can afford a lavish lifestyle, he stated that he likes to give himself a budget saying, “I’ve not upgraded because I don’t spend much money. If I had all my money in one account I would spend all of it, so I get an allowance. Maybe a grand. I spend most of it on taxis!”

‪Just over 24 hours and ÷ is released !‬

Ed Sheeran’s latest album, Divide includes the singles, “Castle on the Hill” and “Shape Of You,” which were released on January 6, 2017. This came less than a week after Ed Sheeran dropped the news that new music would be released soon. On January 12, 2017, Sheeran revealed the track list and the release date of his third studio album. The day it was released, Divide sold 232, 000 copies in the U.K. alone.

Soon, the “Lego House” singer will be going on tour to promote his third album. Ed Sheeran’s tour will begin on March 16, 2017 in Turin, Italy with the final date currently set for June 14, 2017 in Monterrey, Mexico. Tickets were on sale as of February 2, 2017 and though a lot of shows are already sold out, there are still tickets available for certain dates.

Ed Sheeran has had his fair share of relationships. He was dating Scottish singer and songwriter, Nina Nesbitt, who was in his music video for the song, “Drunk.” She is also the inspiration for his songs “Nina” and “Photograph.” Comparatively, her album Peroxide is mostly about Ed Sheeran.

In 2014, Sheeran started dating Athina Andrelos, who works for British chef, Jamie Oliver. They broke up in February 2015. Currently, Ed Sheeran is in a relationship with his high school friend (and crush), Cherry Seaborn.

In September 2015, he bought a $11.4 million dollar mansion in London. Three months later, he bought a flat worth $950,000 across the street for his parents.

It comes as no surprise that Ed Sheeran is one of the biggest names in the industry. His hard work and modest outlook towards life have earned him not only fans, but also money and respect.