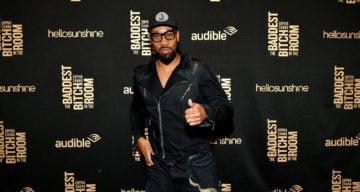 RZA at The Standard, High Line In NYC on September 24, 2019 in New York City. (Photo by Dia Dipasupil/Getty Images for Audible)

With Wu-Tang: An American Saga captivating audiences, the attention is also on the real-life RZA and his personal life. Viewers want to know more about the founding member’s relationship drama, especially since before Talani Rabb, Bobby Diggs was married to Eboni Mills. Since their divorce, very little is known about Mills’ whereabouts. Now the show’s fans are asking who RZA’s ex-wife is. We reveal more about Eboni Mills’ life after her divorce here.

Eboni Mills was born on November 29, 1985, and is a native of Chicago Illinois. She is one of three children born to Angela Lakes and Thomas Mills.

Eboni is a doting sister to Ivory Mills and Thomas Mills Jr. She encouraged her sister Ivory to pursue college. Ivory graduated from Spelman College in 2017 and hopes to run a business with Eboni.

After her marriage ended, Eboni Mills enrolled in Robert Morris University – Illinois. She graduated with a BBA in human resources management/personnel administration in 2010.

She’s been a licensed real estate broker in Chicago since 2012. She initially worked at Kale Realty for more than two years.

Mills has been with Exit Strategy Realty since 2015. Besides brokering property deals, she also puts her extensive expertise in HR management to use.

As of 2016, she is also helping people overcome their debt as a licensed insurance broker. She is a district leader with Primerica.

Mills and Diggs’ marriage ended in divorce, however, in 2006. Back then, the divorce proceedings were bitter to say the least.

The Wu-Tang emcee was accused of infidelity and having children with other women while still married to Mills. Court documents also indicate that they disputed over the distribution of assets.

RZA later remarried to Talani Rabb in 2009. They have a son together.

Also Read: Who Is Catelyn Sparks? Facts about YG’s Girlfriend and Baby Mama

There’s no evidence that Eboni Mills is in a relationship currently. While the relationship with her ex-husband is ambiguous, Mills does hint at having a decent co-parenting relationship with RZA through a series of Facebook posts. She slammed those who make unsolicited remarks about single-parent families such as hers, stating that a parent’s mental health is more important for the kids than for their parents to remain together in a toxic relationship.