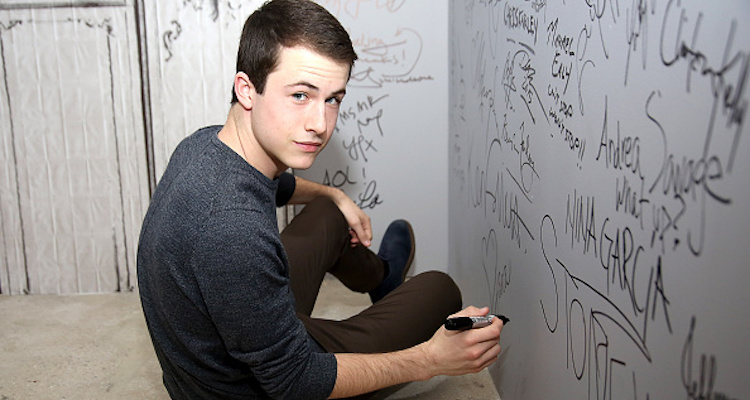 If you haven’t seen Dylan Minnette’s 13 Reasons Why, then you need to do so now! Clay Jensen’s real name is Dylan Minnette, and he stars in the Netflix masterpiece, produced by Selena Gomez. Anyone who has seen it, is still buzzing about this masterful series. So, it’s no surprise that everyone is tagging their friends in memes and following the actor’s Instagram. If you want to know more about the young man behind Clay Jensen, then our Dylan Minnette wiki is just what you need.

Netflix is known for its original content and reviving previously cancelled shows, but its latest hit seires, 13 Reasons Why, is to us what Beverly Hills, 90210 was in the ’90s. It premiered in late March, and it’s been picking up steam ever since. Thanks to word of mouth and social media, friends and their families have been binging the 13-episode teen drama non-stop. The show is basically the cinematic version of the Harry Potter novels, and like those books, fans weren’t able to put 13 Reasons Why down.

Overwhelmed by the response to 13 Reasons Why. Thanks to everyone who's been watching and enjoying (and feeling all the feels). I'm more proud of this show, and everyone involved, every day. This is a still from one of my favorite scenes, with @younggoth. I also feel it very necessary to add that if you or anyone you know needs help, please go to 13ReasonsWhy.info for resources and information. I realize that this is a TV show, and it's made for entertainment, but I do hope we can also make an impact on your life for the better, once you're past the binging.

Dylan Minnette (who’s height is 5’7”) was born on December 29, 1996 in Evansville, Indiana and is the only child of Robyn Maker-Minnette and Craig Minnette. He moved to Los Angeles with his family at a young age and started out as a young actor. And at the moment, he doesn’t have a girlfriend.

Minnette got his first acting gig on an episode of Drake & Josh and from then on, he’s been steadily working in Hollywood, both on the big and small screen. Some may still remember Dylan Minnette’s Supernatural appearance in the episode “Family Remains.” He’s also been on Prison Break, Saving Grace, Lost, and Nikita.

Minnette is still a fresh face in the business and he’s starting to get noticed more with every project he takes on. His most famous role to date was as Anthony in the book-turned-movie, Alexander and the Terrible, Horrible, No Good, Very Bad Day. He also starred as Zach Cooper in the film Goosebumps, based on the hit TV series.

He Played the First Son on Scandal

If you think you’ve seen Minnette somewhere before, then chances are you’ve seen him on Scandal as the president’s teenage son, Fitzgerald Grant Jr. aka Jerry. He was on the show for a few episodes but then his character was killed off by the end of season 3 as part of another plot by Olivia Pope’s father, to make Fitz president for another term. If you’re going to re-watch those episodes, then go right ahead!

He was on Grey’s Anatomy

The hit medical drama may be in its 20th season by now (not actually, but it feels like it), but if you go back to its earlier episodes, you may remember a younger Dylan Minnette as a patient. In the show’s fourth season, his character was trick-or-treating for ears, because he had none due to a medical disorder.

“I was like two feet tall, and people still somehow recognize my face from 20 seasons ago on Grey’s Anatomy. It’s crazy,” he said to Entertainment Weekly. “I haven’t seen it in forever, so when people come up to me, I’m like, ‘How do you remember this? I don’t even remember this!’”

Even though Minnette is one of young Hollywood’s biggest stars right now, people still confuse him with actor, Logan Lerman, who played Percy Jackson in Percy Jackson & The Olympians. In an Entertainment Weekly interview, Minnette talked about how he gets mistaken for Lerman all the time.

“Everyone’s like, ‘Oh my god, can I ask you something? You were in Percy Jackson, right?’ I’m like, ‘No, different guy.’ But they still know that I’m an actor, and they’ll go, ‘Then what is it?’ ‘Well, it’s nothing that Logan Lerman is in, but…’”

He added: “I think Logan is awesome and really talented. I think he’s amazing. I’ve never met him, but I’m honored to be mistaken for him, so that’s great,” he says. “I’m in on the joke. From now on, when people recognize me I’ll be like, ‘That’s right, Percy Jackson was a great time in my life,’”

If you haven’t watched 13 Reasons Why, it’s still available to stream on Netflix! This is one you won’t want to miss!