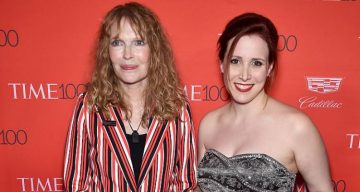 In the wake of the Harvey Weinstein scandal and the movements that followed, writer Dylan Farrow has been asking why her father, famous director Woody Allen has been spared. If you’ve been wondering about Dylan Farrow’s letter and what happened between Dylan Farrow and Woody Allen, then take a look at our Dylan Farrow wiki.

Dylan O’Sullivan Farrow, 32, was born on July 11, 1985, to Woody Allen and Mia Farrow. She is the older adopted sister of Ronan Farrow, 30, and has two other adopted siblings, Moses, 39, and Soon-Yi Previn, 47, who later married Allen and adopted two children with him. Dylan Farrow’s husband is named Dana and they have a daughter named Evangeline, who was born on September 5, 2016.

The story of Dylan Farrow’s abuse is an old story for many who paid attention, but for those unaware of the dark allegations, it is something new. In 2014, Dylan Farrow revealed that her now-estranged father molested her more than 20 years ago, when she was just 7 years old. There was an investigation but according to reports, there was no evidence of abuse. Her mother gained custody of the kids but Allen (who denied the allegations) was never charged for anything and continued to make movies with a variety of actors.

While Dylan Farrow’s Instagram isn’t available, she does have a Twitter account. On Wednesday, she posted a message to thank those that have been supportive of her. She has questioned why her father has not been condemned, like Kevin Spacey and Harvey Weinstein.

“I know that standing with me against Woody Allen is not easy in this industry. I know that I am asking for courage and even sacrifice. But if #TIMESUP truly stands with all victims, as it says it does, then that sacrifice is necessary to help convert this moment to a movement,” she wrote. “To those who have already taken a stand and amplified my voice with theirs, there is a 7-year-old girl inside of me who thanks you from the bottom of her heart.”

#Repost @justjared #MiaFarrow's daughter #DylanFarrow revealed she is pregnant by stepping out with her baby bump last night!

While many have come forward with their stories–which include many of the entertainment world’s biggest names—not every victim has been believed and many have been skeptical, both in and out of Hollywood. Farrow has blamed many who have worked with her father, including Kate Winslet and Blake Lively. Most recently, actress Mira Sorvino apologized for working with Allen and cut ties with him in a letter, supporting his daughter.

“I confess that at the time I worked for Woody Allen I was a naive young actress. I swallowed the media’s portrayal of your abuse allegations against your father as an outgrowth of a twisted custody battle between Mia Farrow and him, and did not look further into the situation, for which I am terribly sorry. For this I also owe an apology to Mia.”

She continued, “It is difficult to sever ties and denounce your heroes, your benefactors, whom you fondly admired and felt a debt of gratitude toward for your entire career’s existence. To decide, although they may be fantastically talented and helped you enormously, that you believe they have done things for which there can be no excuse. But that is where we stand today.”

She concluded, “I send you love and inclusion and admiration for your courage all this time. I believe you!!”

#woodyallen #dylanfarrow #miafarrow WOODY ALLEN What is your favorite film by Woody Allen? That´s the question asked by his daughter in a letter published in The New York Times? When Woody Allen received a Golden Globe award for lifetime achievement a few weeks ago, there was a lively debate about whether it was appropriate to honor a man who is an real "artistic giant" but also who was accused years ago of child molestation. Now, the truth is coming out! According to his daughter, Woody Allen is a child molester… SEE FULL LETTER FROM HIS DAUGHTER DYLAN FARROW http://mobile.nytimes.com/blogs/kristof/2014/02/01/an-open-letter-from-dylan-farrow/?_php=true&_type=blogs&_r=0 SEE STORY HOW THE LETTER WAS WRITTEN TO THE NEW YORK TIMES http://www.nytimes.com/2014/02/02/opinion/sunday/kristof-dylan-farrows-story.html?ref=opinion — at Mont Tremblant, Quebec, Canada.

Her brother Ronan, a Rhodes scholar and investigative journalist, has been writing about the Weinstein scandal and has interviewed victims and heard their stories. He’s also been supportive of his older sister and commented on abuse of power in the industry.

“It’s not for me to say what Hollywood will or won’t do,” Ronan told The Hollywood Reporter. “I will say that in every industry there are still powerful men facing credible allegations of wrongdoing who continue to evade accountability. As empowering a moment as this moment is, there’s still a long way to go.”