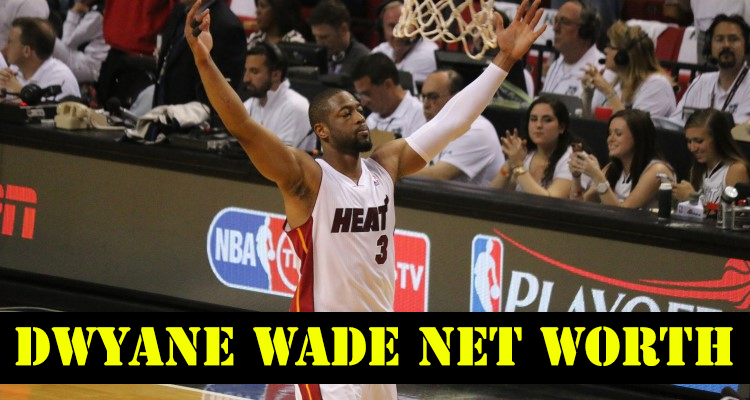 If you’re a basketball fan, then the name Dwyane Wade will sound familiar to you. But after recent news broke about Wade leaving the Miami Heat to join the Chicago Bulls, the Internet has been flooded with searches such as: “Dwyane Wade new contract,” “Dwyane Wade Bulls,” “Dwyane Wade wife,” and “Dwyane Wade kids” in order to get all the information surrounding the former Miami Heat star. But how rich is Dwyane Wade? He’s had a great NBA career so far and fans want to know why he would leave the Heat to sign a new contract with Bulls.

Don’t worry, because all your questions will be answered by looking into the Dwyane Wade net worth of $115.0 million.

Dwyane Tyrone Wade, Jr. was born on January 17, 1982 on the South Side of Chicago, Illinois to JoLinda and Dwyane Wade, Sr. Wade has publicly mentioned that his mother was already a mother of two at the age of 18 and was addicted to drugs. He described his childhood as difficult due to being around gangs and his mother’s drug issues. Soon after, the family moved to Robbins, Illinois (without JoLinda, who later ended up in jail and has been clean since 2003) in order to have a better life. Dwyane, Jr. would find comfort and an escape in playing basketball and commit to it full time.

In 2003, Wade was drafted by the Miami heat and would soon move up in profile as one of the star players on the team after his rookie year. Wade would wear his jersey (#3) with pride and played shooting guard, standing at six feet and four inches tall and dominated the court alongside fellow heat player, LeBron James. He also orchestrated the arrival of Chris Bosh and James onto the Miami Heat in 2010. Wade even agreed to take a reduced salary in order to accommodate the two new stars in order to accommodate then under the NBA’s salary cap.

The MVP star player suffered an injury in his 2006-2007 season and missed a total of 31 games, which didn’t seem to bother his net worth much. He still remained a scoring champion and is known for his playoff defeats and Olympic Bronze and Gold medals.

It was recently announced that Wade used his free agency to join the Chicago Bulls in favor of the Miami Heat. Some fans are upset while some are still supportive of him and respect his decision. Wade told the Associated Press, in a newly released letter, that it was a dream of his to always play for the Bulls and now that opportunity has been granted.

“Watching the Bulls growing up inspired me at an early age to pursue my dream of becoming a basketball player,” Wade wrote. “My most treasured memories were watching my dad play basketball on the courts of Fermi Elementary School and developing my game at the Blue Island Recreation Center. I have never forgotten where I came from, and I am thankful to have an opportunity to play for the team that first fueled my love of the game.”

As one of the many guest co-hosts of Live with Kelly, Wade explained that he lost weight and sleep over making his decision, but ultimately made the “right choice.”

According to the Associated Press, Wade signed a two-year deal, worth $47.0 million -and you better believe he is carrying over his jersey number!

Wade and his wife, actress Gabrielle Union, purchased a mansion in Miami for $10.6 million on La Gorce Island. The beautiful 13,000 square foot Mediterranean-style home has six bedrooms, a pool and its own docks. It looks like the couple can’t decide between driving boats or cars! What a dilemma!

Wade was previously married to his high school sweetheart, Siohvaughn Funches in 2002 and divorced in 2010. After a messy divorce battle, Wade gained custody of both their sons, Zaire and Zion Wade. In addition to taking care of his kids, Dwyane also raises his nephew. He also conceived another son, Xavier, with a longtime friend back in 2013, when Dwyane and Gabrielle Union briefly split, due to career demands. In 2014 in Miami, he married Union (who insisted on a prenuptial agreement to protect herself) and have been happily married ever since. At this time, they have no children together.

Wade has made millions from endorsements with Nike and T-Mobile, which has only added to his net worth. He used to have an endorsement deal with Converse but later moved on to Nike. It’s no surprise that basketball players take on more projects and gain more fame and money (sometimes more off-court) when they advertise a product.