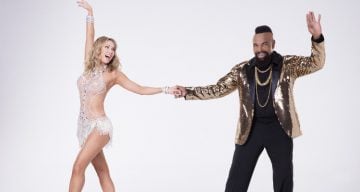 Fifth Harmony’s, Normani Kordei and Olympic gold medalist, Simone Biles have already proven their skills as dancers. Let’s not forget Glee actress, Heather Morris, who is doing very well —but that was expected! With a new pair being eliminated each week, everyone’s positions on the board is shifting. Who is at the bottom this week?

Last night, the theme was “Most Memorable Year,” and each pair danced to a meanfingful part in each celebrity partner’s life. Simone Biles and Sasha Farber danced the Viennese waltz to “Good Good Father” by Chris Tomlin in memory of Biles’ grandparents adopting her. Bonner Bolton and Sharna Burgess went back to the year of Bolton’s bull riding accident and danced the foxtrot to “Feeling Good” by Michael Bublé. Erika Jayne and Gleb Savchenko performed to Jayne’s struggle of being in the entertainment industry with a cha-cha to “Express Yourself” by Madonna. Rashad Jennings and Emma Slater gave us a Contemporary routine to “Unconditionally” by Katy Perry inspired by Jennings’ father.

Nancy Kerrigan and Artem Chigvintsev danced the foxtrot to “My Wish” by Rascal Flatts to Kerrigan’s heartbreaking memory of her miscarriages. Normani Kordei and Valentin Chmerkovskiy remembered Kordei’s parents pushing her to audition for The X-Factor with a rumba to “Impossible” by Shontelle. Heather Morris and Maksim Chmerkovskiy gave us a sultry cha-ha to “Shut Up and Dance” by Walk the Moon in memory of her wedding day. Mr. T and Kym Herjavec went back to Mr. T’s battle with cancer and tackled the waltz to “Amazing Grace” by Ray Chew Live. David Ross and Lindsay Arnold danced the Viennese waltz to “Forever Young” by Youth Group in honor of Ross’ World Series win. Nick Viall and Peta Murgatroyd remembered Viall’s final Bachelor stint, where he finally found love, and performed a sexy rumba to “Shape of You” by Ed Sheeran.

You might pity the fool who can’t tango, but when it comes to Mr. T, scores are just numbers! Despite consecutive low rankings, The A-Team star isn’t even getting an “A” for effort. He was saved by the audience votes in week 3, which goes to show that every vote really does matter. Though many were unhappy that him and Herjavec were at the bottom this week, there were a lot of unsurprised viewers who were unimpressed with their performance last week.

Not too far behind Mr. T at the bottom is Nick Viall. Unlike his time on The Bachelorette, his charm can’t save him from being eliminated. Though many thought that he significantly improved over the last few weeks, he didn’t get enough votes to be spared from the bottom.

No one knows whether or not these two are dating, but they need to work better together unless they want to be next to foxtrot out the door! They’ve proven to be a fan favorite for tabloids, but not so much for the judges.

The Real Housewife and singer is tied with her Bachelor competitor, but that doesn’t buy her a lot of time. Maybe not this week, but unless she works harder to perfect her moves, she might be a regular in the bottom.

Who Went Home on Dancing with the Stars?

Mr. T was voted off after his and Kim Herjavec’s moving performance to remember Mr. T’s fight with cancer more than 20 years ago. The judges were moved by the performance but only scored the pair 28 out of 40 points. Though it was Mt. T’s best performance so far, it was not enough to save him from elimination. Judge Carrie Ann Iraba said his performance “was gallant, it was genteel and it was full of grace.”

The couple which got the highest score on last night’s episode were Rashad Jennings and Emma Slater. Jennings’ most memorable year was 2006 when he had to give up a scholarship to play football in college to take care of his sick father. He says that this was when he learned the true meaning of unconditional love. The judges were choked up and gave the season’s highest score to the couple, 39 out of 40. Judge Bruno said “I was mesmerized, I wasn’t watching dance, I was watching two great artists painting one of the most beautiful works of art. Art is something that speaks to your body and soul and affects you forever, thank you.”