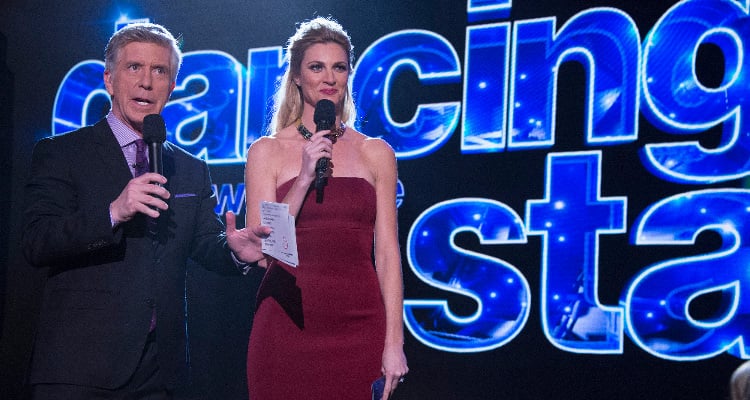 The Ballroom Heads to Sin City

Live from Hollywood…this is Las Vegas! Dancing with the Stars week 3 opened with showgirls, Elvis impersonators, tourists, a bachelorette party, magicians, blackjack, and loads of dancing. If the rest of the routines looked as good as the opening number, we’re only missing a shrimp cocktail for an awesome Vegas night!

Nick Viall and Peta Murgatroyd kicked off the first Vegas routine, a tango to Lady Gaga’s “Poker Face.” They appeared to have taken last week’s critiques and improved. For his improvement, Nick got a score of 26.

Mr. T and Kym Herjavec’s first two DWTS performances were similar to musical versions of action movies like Rocky or The A-Team. So this week, viewers were almost expecting him bring another action packed performance. But they realized that their action movie inspired routines were bringing them down, so they softened things up for Vegas week with a foxtrot. His gentle side was certainly more dashing, and we’d love to see this side of Mr. T more! For their impressive change-up, the judges gave him a 24.

For someone who was paralyzed a year ago, the Charleston is a tough dance. But Bonner Bolton isn’t one to give up without a fight! Bonner and Sharna Burgess tackled the Charleston in a lackluster way. It was a very good effort given his injuries, but it wasn’t that high energy fun Charleston we expected. A step-down from last week, Bonner got a 24.

Also Read: Charo Wiki: Everything You Need to Know about the “Dancing with the Stars” Contestant

After a performance by Derek and Julianne Hough to kick off next week’s “Most Memorable Year” theme, we got the jewel dance of the Vegas crown. Heather Morris made Maksim Chmerkovskiy proud with her Britney-fied tango to “Toxic” with Alan Bersten. They were so good, the gold glitter background looked pale before them! And Carrie Ann Inaba gave her first 9 of the season, putting Healther second on the leaderboard with 33!

Keo Motsepe reined in the ball of energy that is Charo, for a smooth foxtrot to the Motown classic, “Chapel of Love.” Their Vegas dance theme was —you guessed it — a Vegas wedding! The routine, the night’s theme, and the entire episode screamed Charo. Keo earned all the praise for taming her after her outbursts last week. But we still missed the old Charo, who got a 24 this week, which she accepted graciously.

The clear favorites this season, Simone Biles and Sasha Farber arrived on the stage to foxtrot. Simone’s really got the technique down to a T and she’s flawless, but in a glamorous Vegas theme, it lacked. The judges wanted to work on her emotion and Sasha got a few critiques for outshining her. Carrie Ann called the Lift Police for the first time this season. But regardless, Simone scored an impressive 32.

At this point, we’re wondering why Nancy Kerrigan and Artem Chigvintsev aren’t at the top of the leaderboard! There’s nothing bad to say about her pure, unadulterated “Shake Your Bon-Bon” samba. They even made Ricky Martin proud! Clearly, she’s the most underrated frontrunner in the history of the show. She got a 33, and earned the second 9 of the night! We’re waiting for the moment Nancy Kerrigan gets the first 10 of the season.

So proud of Nancy, she really shook her bon bon tonight. #dwts #mirrorballers

David Ross may not dance that well, but he is entertainment incarnate! Nick and Sasha could learn a thing or two from him about not holding back! His jazz tonight was a goofy Magic Mike homage, showcasing David’s sexy side (Yes! He’s still got it!). His technique is definitely improving and he genuinely looked to be having fun up there. David and Lindsay Arnold scored a 31, and if they keep that up, they’re not getting voted off anytime soon!

Erika Jayne and Gleb Savchenko jived to “Take me to Heaven.” She showed a lighter side to her, but that’s not the real Real Housewife. We want that sassy diva on the ballroom! She got a 26 and looked fine, but he determined to turn it around next week.

Let’s face it; you’ve been waiting for the NFL pro to take the stage. Rashad Jennings and Emma Slater did the samba to Jason Derulo’s “Swalla” —because everyone sambas on a poolside cabana! It was bouncy and fun but perhaps viewers enjoyed it more than the judges. Sigh… Julianne and her high expectations. He got a 28, a slump in his otherwise perfect scorecard.

And then came the one who would win big in Vegas. Normani Kordei and Val Chmerkovskiy bought her Fifth Harmony style and presence to the ballroom with an incredible foxtrot! She’s a natural performer and simply amazing. Even the judges can do nothing but nitpick. She got a 34, the highest score of the night, and she went away with two 9s.?/

Who Went Home on DWTS Tonight?

Tonight’s Vegas party was fun, but it had to come to an end. After the last week’s dances, the votes and results were in. It came time for one couple to leave the Vegas ballroom empty-handed. It’s a sad way to end such a fun night, but that’s the rules of the game.

Tom Bergeron and Erin Andrews announced Charo and Keo, and Nick and Peta as the two couples in the bottom two. Nick will live to dance another day but sadly, Vegas queen Charo was voted off. But she took it well in true Charo-style —calling Bruno Toniolo to the parking lot to settle the score and stomping off without Keo. We’re sure she loves you Keo, and we still love you, Charo.